When it comes to announcing specifics, Madden 22 gives you just enough info to pique your interest and keep you coming back for more.

For example the Madden 22 All-Access promos on social media have hyped up the launch of the game more than ever. The promos and production videos have been amazing.

Quick Jump Links to Top 10 Ratings at Each Position:

“As we get closer to the official launch of Madden NFL 22 in August, we plan to give you a more in depth look at things to come in Madden NFL 22 through Madden All Access.

Way back in 2006 a sports video game called NFL Head Coach was launched. I loved the concept of the game, the minutiae of daily tasks, and the unique graphics.

But with Madden 22, it sure looks and feels a lot like that.

First off, I LOVE the cover and how simple it is. Minimalist. Tom Brady and Patrick Mahomes are on the cover of Madden 22. Just vibing.

Quick Jump Links to Top 10 Ratings at Each Position:

In an interesting partnership between Madden and ESPN, positions will be highlighted each day (along with members of the Madden “99 Club” the players who’ve achieved the highest possible overall rating in this year’s game) and will be revealed on the horrible ESPN Mike Greenburg vehicle Get Up each day.

Here is the schedule of Madden 22 Ratings release by day and where you can watch:

Coverage will wrap up with a SportsCenter special Friday at 7:30 p.m. ET on ESPN, where the final ratings will be revealed along with player interviews.

How bummed/upset are you if you are an offensive lineman?

The NFL makes its fortune on the performance of offenses (and referees lol) and the HAWGS up front power the offenses!

Am I the only MADDEN NERD that wants to know who the 10 best right guards are? Centers?

Thanks to The Blind Side, everyone knows how important a left tackle is. But they still can’t get any love?

Going to also be interesting to see how ESPN screws this up. What race related low Madden 22 player ratings will Screamin’ A Smith yell and posture about?

I don’t know, but I do know you can guarantee 100+ hours of ESPN content focused on it, from all angles, in all holes! 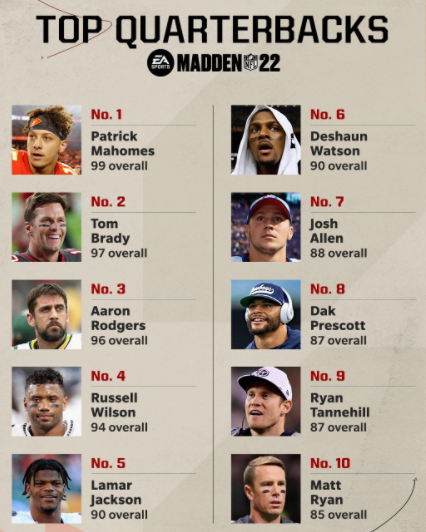 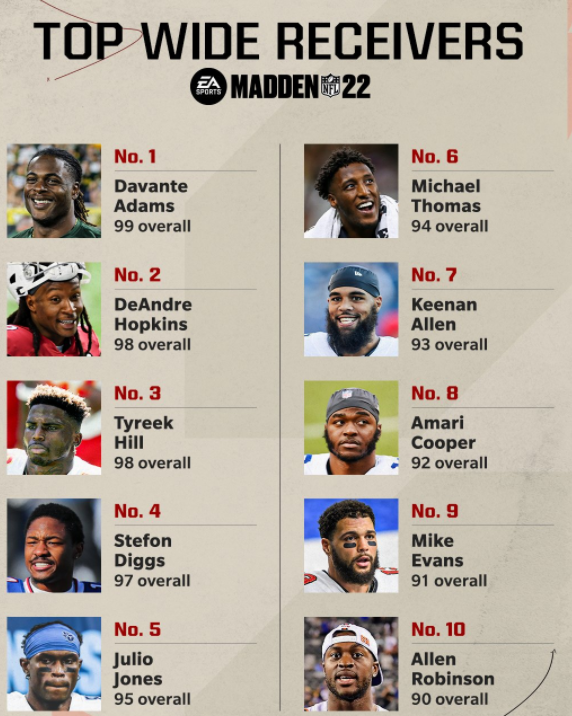 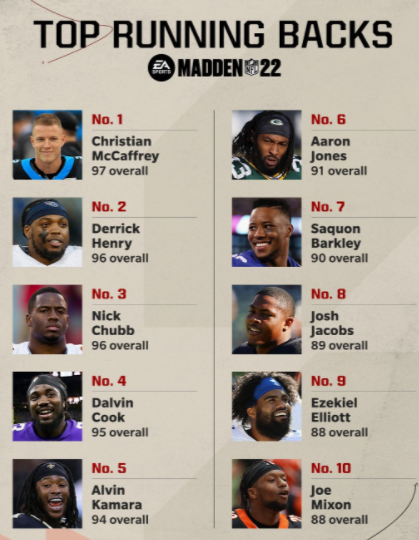 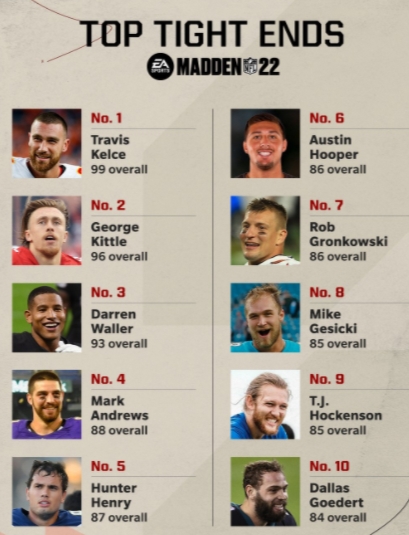 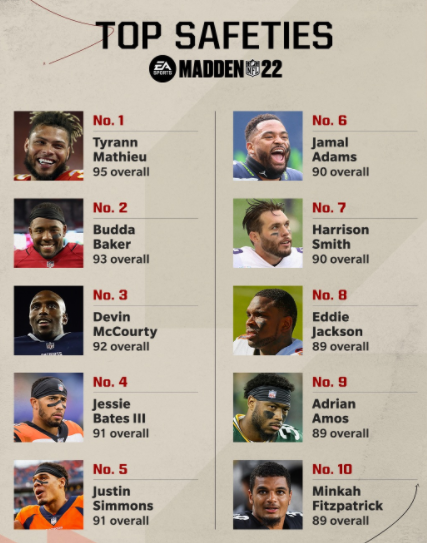 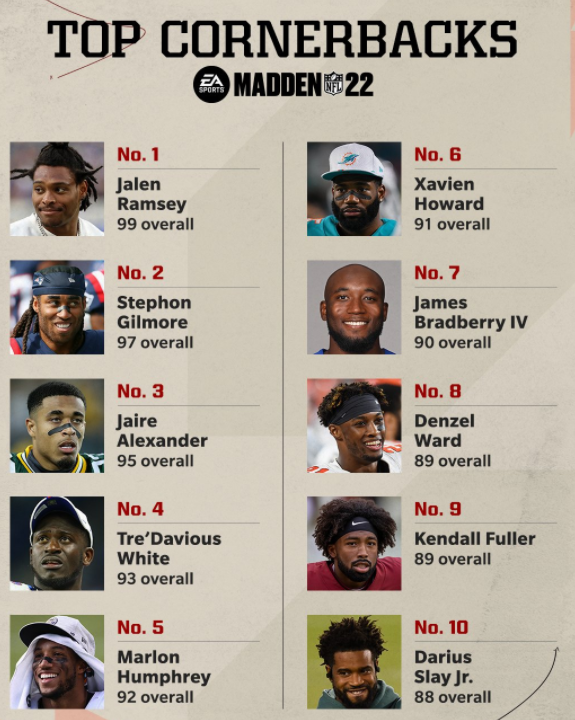 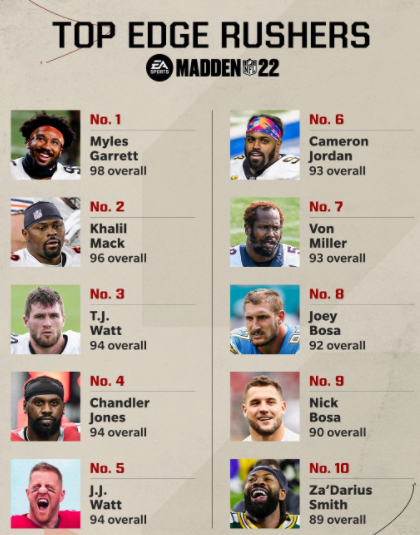 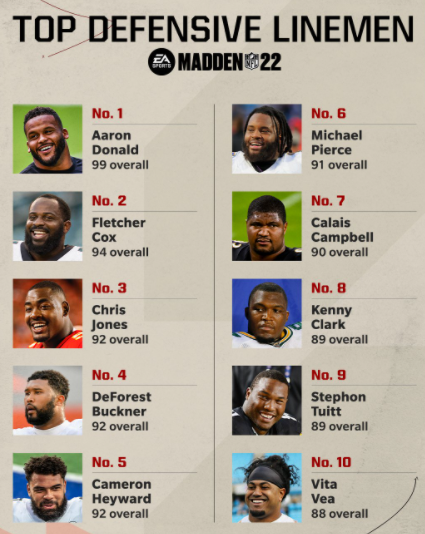 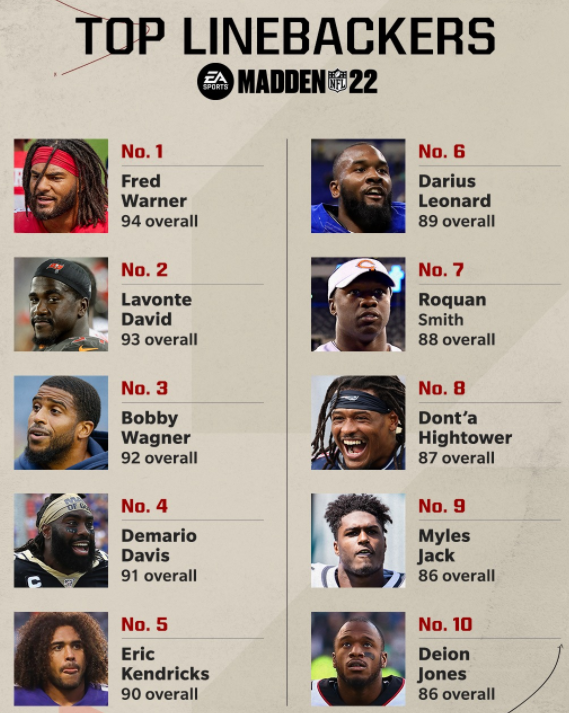 The Lowest Ranked Player In Madden 22 is Zach Tiner at 25 overall!

Which means he got a Tampa Bay Super Bowl ring this week.

In the meantime, read our list of All-Time Madden 99 Club members for each Madden version. At one time, the early Madden’s actually had 100 overall player ratings.

From the EA blog:

“We heard you. Not only is your feedback extremely important to us, but also helps Madden NFL get better each year. Our development team worked tirelessly to incorporate highly-requested updates to Franchise in Madden NFL 22 that make you feel more connected and in control.

There will be more detailed staff management and skill tree progression systems, with comprehensive weekly game strategy that integrates into your gameplan. Through the regular season and off-season, new scenarios will keep things fresh as you weigh various risks and rewards to make the right decisions for your team. Plus, Franchise will see improvements throughout the year via three Live Service updates. Our first live service update targeting September to release is one of your top requested features, Player Scouting. Keep an eye out for more Gridiron Notes as each Live Service update rolls in.”

Coaching staff + coaching trees = complete nerdery. If you loved setting the prices for hot dogs as a franchise owner in the early 2000s, you will love this. you can hire
offensive coordinators defensive coordinators and a player personnel department you can also fire them and other teams can hire these guys away from you as well not only do you have a full coaching staff but you also have skill trees that come with these coaching staff so that you can upgrade them throughout playing your franchise these skills can help upgrade players faster scout players easier trade for players easier re-sign players easier.

Game planning – more minute than ever

Enhanced Crowd Visuals – This builds on some of the scenes we saw in next-gen last year.

Faux Social Media Integration – These pieces of visual presentation are similar to what we saw last year. The fake posts are used to create some franchise mode storylines.

Scanned Rookies – Some rookies appear to have already been scanned.

New Pregame Presentation – We will see some different packages for prime time games and playoffs in franchise mode.

Signature Animations – Some wide receivers like the Buffalo Bills’ Stefon Diggs have signature moves at the line of scrimmage as they get into their routes.

New Sideline Reception Animations – There are some new foot-placement animations with toe-drags and more.

The Next-Gen Movement is Improved – Based on the trailer, the improvements to player movement is a little more noticeable in this year’s game.

Team Game Plans – Within the franchise, weekly game plans have been changed. There are no more bronze-silver-gold exercises to master plays. It has been replaced by free practice only, but the game planning is based on the tendencies of your upcoming opponent.

Halftime Adjustments – At halftime, you will be shown a breakdown of your opponent’s most successful attacks and allowed to shift your focus in areas designed to shut them down.

Coordinators and Player Personnel Departments Are In – The series has brought back offensive and defensive coordinators, but unfortunately, they are fictional. However, those coaches can be progressed through your organization by developing RPG-like traits and special abilities.

Staff and Coordinator Upgrades – Each week you will be able to upgrade your staff with XP. More than 60 talents will be available at launch for coordinators and the player personnel department, and more will be added after launch.

New Sideline Emotion – Players on the sidelines supposedly have more realistic and emotional reactions to events on the field.

The 99 Club – This annual staple returns. There were a few references to it in the preview event, but no idea which players will get that distinction.

Dynamic GameDay 1 – Momentum Factors are like X-Factors for teams and NFL stadiums. The genesis of this concept was from the NCAA series.

For example, when the Tampa Bay Buccaneers are rolling at home, they can activate “Fire the Cannons,” which restores player energy for the Bucs when they are in the red zone. There is also “Shook,” which distorts the play art for the opposing team, and there is also “Tunnel Vision,” which hides some of the visiting team’s receiver icons on pass plays.

The entire mechanic is designed to deliver an element of home-field advantage. Home teams will have access to more M-Factors. The Momentum Meter is at the top of the screen, so players will know what stage they are in. Other examples of M-Factors are kickers always kicking in the ice stage, tougher kick meter to stop, fewer stamina reserves in high-altitude stadiums, and hot routes being made more difficult.

Every stadium has a unique M-Factor based on the history of the building and team. Neutral site games won’t have a home-field advantage. There will be presentation elements added to augment the M-Factors effect on the game and situation. This element will be tuned for every mode. The home-field advantage factor won’t be active in MUT.

Atmosphere is about crowd reactions, stadiums, and presentation. Star-Driven AI is designed to make teams play in ways that are true to their real-life versions. It is all about tendencies and AI. Specifically, this should impact QB decision-making under pressure, ball-carrier moves, etc. From a team standpoint, offensive and defensive play-calling and tendencies are based on real-life behavior, or in franchise, based on the play from team owners and sims.

More Catch Types – In addition to sidelines, players will have more variety in the middle of the field.

Superman Characters – Fictional men and women decked out in the stands.

High-Altitude Gameplay Effects – In Denver, pass and kick distance will be increased for both teams. Players will also have short-term stamina drains. 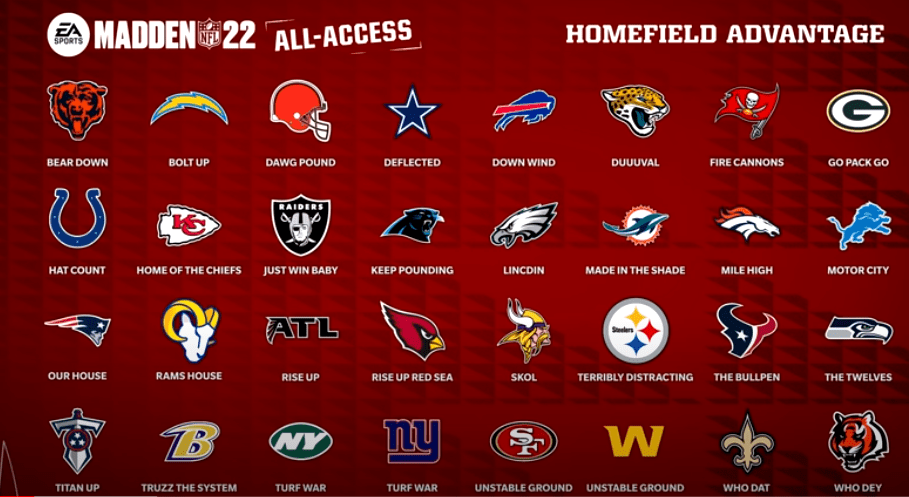 Every Signature M-Factor & Homefield Advantage Here is a list of every Madden 22 homefield advantage and gameday factor by team:

Away team Hot Routes have a chance to fail in the red zone. Receivers who are hot routed will receive a “?” indicator at the time of a hot route to signify they are unsure of what the call is.

Away team punt distance is shortened when kicking across the 50.

The Away team kicking arch is harder to control.

Home team players have their Fatigue replenished temporarily while in the Red Zone.

The Home team defense can see the hat count on all plays via coach cam.

Offensive audibles made by the Away team have a chance to fail.

The Home team has more stamina during plays.

While winning the Eagles gain momentum and Away team gains less.

Miami Dolphins – Made in the Shade

The Dolphins fatigue slower. Their bench in real life home games is strategically placed on the OPPOSITE side of the direct sun.

Away team players have less stamina.

Home team gains momentum on TD and third down stops.

Home team gains a flat amount of bonus momentum on every offensive play.

The home team gains a small amount of speed rating when in the red zone.

Away team hot routes have a chance to fail on 3rd/4th down requiring them to be made again.

Random portions of the play art for the away team offense will be squiggly and hard to read.

On away team 3rd/4th conversion attempts, a random receiver will have an incorrect route when he lines up pre-play.

These will affect both teams and can vary wildly.

Franchise Mode Acknowledgement – According to EA, franchise mode is the game’s most played mode.

Franchise Mode Season Engine – Think of it as the menu screens and conversations we saw in NBA 2K’s MyGM Mode, only with specific scenarios. It will deliver cinematics to drive home the story and journey components. There will be 35 at launch and more added post-launch.

Scouting in Franchise Mode – The revamped scouting feature got a lot of respect, but it won’t be added until September. When it becomes available, it will allow you to disperse scouts to specific regions, etc.

New Super Bowl Presentation – It will be different this year

Trade Logic in Franchise – There are more improvements to this piece of the game at launch, and a “robust” offering will come after launch.

Face of the Franchise – It will return, and it is called United We Rise with a new cast of characters.

Next-Gen and Current-Gen Versions are Almost Identical – Aside from some of the presentations in Dynamic GameDay, which leans on the PS5 and Xbox Series X strength, the features are the same.

Next-Gen Stats Update – When asked how often the NGS will be updated, Oldenburg said they are still working on that, as they don’t want to make changes too quickly.

Mini-Games Aren’t In – The old-school favorite will not be back in Madden 22, but it will be added in the future.

All-Pro Difficulty – This remains the difficulty setting for experienced and online competitive matches.

5 Reasons NASCAR Is Better Than The NFL