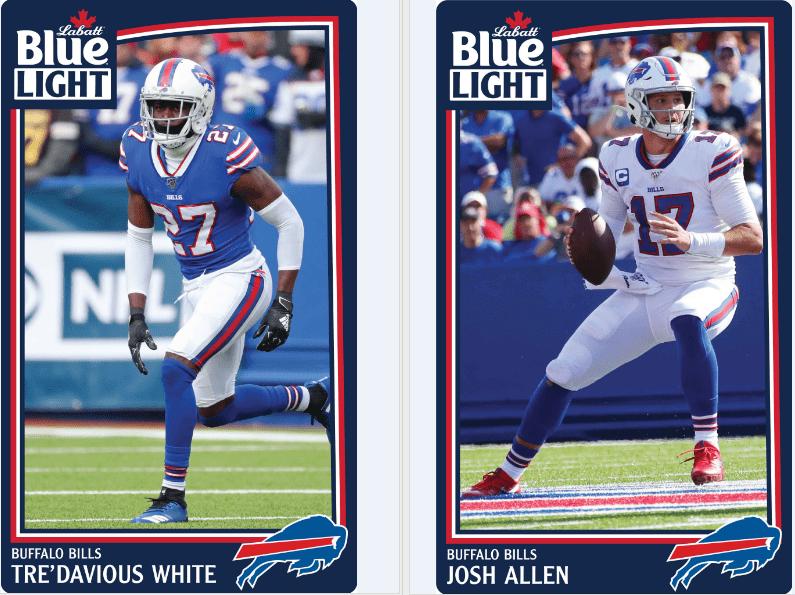 Labatt’s sales were up a whopping 980 percent in Nashville compared to an average week when the Bills beat the Tennessee Titans 14-7 in October, according to a company spokesperson.

Before the Bills played the Houston Texans in a wildcard game during the 2019 season, a  Houston-area wholesaler reportedly ordered seven times as much of its beer compared to this weekend last year.

Bills fans will get closer than ever to their team with Labatt’s new #GearUp program, which offers a behind-the-scenes look into Josh and Tre’s game day rituals, prep and routines.

Fans who follow along will have opportunities to win Labatt Blue Light and Buffalo Bills co-branded merchandise and signed memorabilia while they unlock exclusive content throughout the football season.

“If there’s one thing we love in Buffalo it’s football season,” said Jaime Polisoto, brand manager. “The partnership with Josh and Tre will create new ways for Labatt and Bills fans to get to know the players in a more intimate environment.”

“Much of the inside information will come directly from Josh and Tre sharing how they gear up for the season, including training and prepping for game day. We want fans to feel connected to the players and the game-day action they create on the field!”

“Labatt is such a big part of the Buffalo football tradition. I’m excited to team up with them,” said Josh Allen, Buffalo Bills quarterback. “We have a lot of fun in store for our fans this season!”

“I can’t wait to kick off this season and I am pumped to have Labatt along for the ride with me,” added Tre White, Buffalo Bills cornerback. “We’re teaming up to give fans an inside look at game prep and to celebrate together all season long.”

To kick off #GearUp, fans will have the opportunity to show their team pride through an exclusive “homegating” sweepstakes.

Beginning now and running through September 11, fans can share how they’re planning to #GearUp for the season for a chance to win the ultimate kit to tailgate at home, including a 55-inch TV, LED signs, signed jerseys, apparel and more.

“Labatt has become the unofficial beer of tailgating, and even though we might not be able to enjoy a Labatt Blue Light in the parking lot this season, we want to bring the players and the tailgate experience to our fans at home,” added Polisoto.

First brewed in Canada in 1847, Labatt continues to carry on the tradition and heritage of the great outdoors.