As nondescript as his career may appear to be while watching it unfurl over the past 15 seasons, Greg Olsen is in all likelihood a …

In this video Detroit Lions QB Matthew Stafford told us about the most beautiful TD pass he’s ever thrown (on a whim with no prep), …

In this video recorded live from Super Bowl Radio Row, Devin Hester, the greatest kick return man in the history of the NFL, recounts his …

Martellus Bennett is a former pro bowl tight end, but it’s his new career that will make the fans buzz. In this video, he sits …

Khalil Mack is the ultimate underdog story. Even though watching him each Sunday he looks like he came out of the womb ready to attack …

This offseason, two-time Pro Bowl running back Matt Forte signed a three-year $12-million-dollar free agent contract with the New York Jets. Bears fans were, and still are, upset about it.

And why wouldn’t they be?

After eight years in Chicago, Forte ranks second, behind only Hall of Famer Walter Payton, on the Bears’ all-time lists for rushing yards, yards from scrimmage (12,718), receptions (487) and 100-yard games (24). He’s also third in total touchdowns and sixth in receiving yards (4,116).

This offseason, the Bears front office didn’t even attempt to re-sign the second most productive player in the history of the franchise. 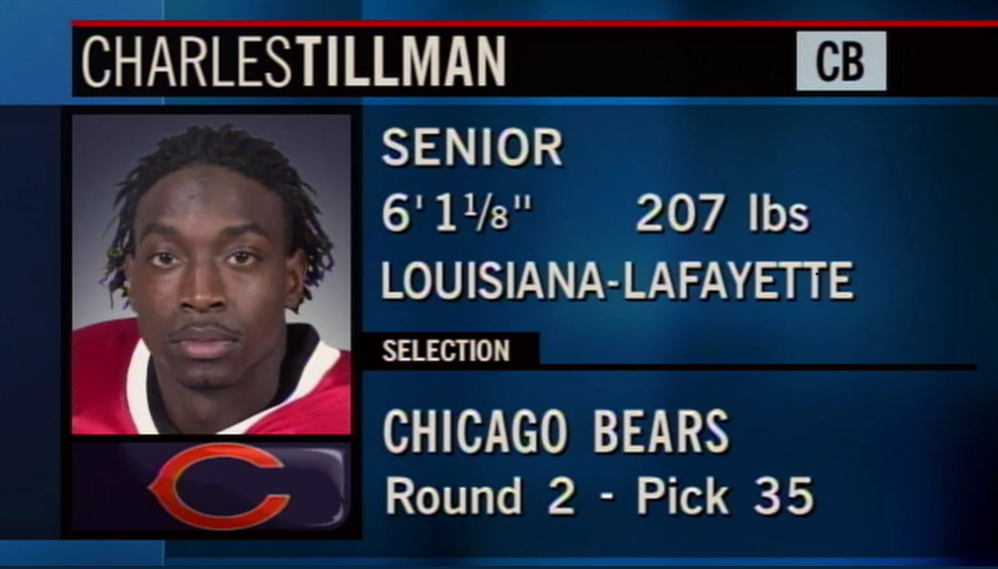 Every Bears fan knows the team needed a No. 1 WR for essentially the life of the franchise. Chicago Bears receivers have historically been terrible.

Even to this day, Walter Payton has the 4th most receiving yards in franchise history.

But what everyone may not know is just how long and how bad the Chicago Bears receivers were prior to Brandon Marshall.

In that 25 year span, you could also argue the QBs were terrible as well.

Love him or hate him, Jay Cutler is the best QB in Bears‘ franchise history.

As Muhsin Muhammad famously stated, Chicago is “where receivers go to die.”

Take a look at this list of Chicago Bears receivers prior to Marshall. It is sad, how did they win anything!?

Basically the prototypical Bears WR: not great at any one thing, not particularly fast; just good enough.

486 yards receiving in a season is OK…for a running back.

Davis was the most consistent WR the Bears had since Willie Gault. Unfortunately, he was known as much for his gruesome double knee injury in the Astrodome as his receiving exploits.

Some of the youngsters may not know that Waddle, a frequent NFL Network contributor, was one of the Bears’ most consistent receivers for a three-year period.

The sneaky-fast Graham was a technician at WR, making the most of his lack of speed to outwit defenders. He was a major contributor for the Bears’ 1994 playoff team and to Erik Kramer’s 1995 season, which is still the most productive season for a QB in franchise history (3,838 yards, 29 TD).

Conway was the most exciting Bears WR since Willie Gault. His back-to-back 1,000-yard seasons in ’95 and ’96 made him the first Bears player to accomplish the feat.

Back to reality. Proehl’s ’97 season was a successful one, considering the Bears didn’t plan to rely on him that much entering the season and that he only started 10 games.

The Bears drafted and developed Engram into a prototypical possession WR.

Robinson’s ’99 season came out of nowhere, setting a team record in single-season receiving yards, but was never duplicated again in his career. It took him the next four seasons to accumulate 1,400-plus receiving yards total.

An injury during the 2000 season limited him to 11 games and unfortunately, limited the rest of his career.

Man, did Terrell have some serious potential. He could never live up to it. He was out of Chicago the following year and never played in the NFL again.

After a monster 2004 season and a Super Bowl appearance in 2003, the Bears gave Muhammad a six-year contract worth $30 million, with $12 million guaranteed.

Personally, I think this contract is exactly why the Bears have shied away from the free-agent market ever since, with the exception being two years under Jerry Angelo.

Berrian developed in to a solid WR in Chicago, primarily as a deep threat, thanks to his speed. Angelo’s decision to not re-sign him in 2008 was one moves he deserved credit for as GM.

Remember that one time the Bears FORCED D Hess to play WR? He told me about it at the Super Bowl here:

After the neck injury he suffered last season, I wouldn’t blame him if he retired. Brutal.

As I watched the Bears maul the Dallas Cowboys last night (October 1st, 2012), I couldn’t help but to feel that I’ve been here before. …