The number of how many people watch the Super Bowl has traditionally grown every year – but has slumped over the last several.

The streaming and digital audience of 11.21 million viewers for Super Bowl LVI is an all-time high for the Super Bowl,

In 2015, 114.4 million people watched the Patriots defeat the Seahawks in Super Bowl 49, making it the most watched Super Bowl in history.

It is also the 2nd most-watched broadcast in US television history, behind the 1969 Apollo 11 moon landing.

But, CBS was quick to say that digital viewership of Super Bowl 53, including those who streamed the game on a computer or set-top box, reached a new record of 2.6 million people.

The 2020 Super Bowl, featured the Kansas City Chiefs rally against the San Francisco 49ers in a fourth quarter comeback, was watched by 99.9 million viewers in the United States. 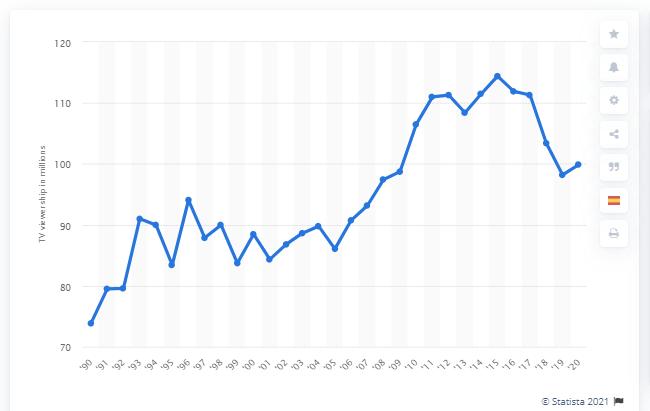 Except for 2018, and a regression in 2013, the TV audience had increased every year since 2005, when 84 million people watched. But ratings have dropped for each of the last four years.

Katy Perry’s Super Bowl 49 halftime performance was the most watched halftime show ever, with 118.5 million viewers.

And I’m not coyly making a smooth allusion to two-time Super Bowl champion and Dallas Cowboys running back Emmitt Smith. Ok, yes I am.

The improvement of the home viewing experience of NFL games has been a growing concern for the league.

As a fan, why invest four to five hours of your life and several hundred dollars into leaving the comfort of the couch, to ultimately interact with bathrooms, and people, that feel like they haven’t been appropriately cleaned in decades?

The continuous shift in fan viewership will only become more of a threat to sport stadiums if they don’t improve the fan experience to keep up with evolving fan needs.

The University of Florida’s Sport Management program, created this infographic, which outlines changing fan preferences and the ways that stadiums across major sports leagues are working to meet these needs by undergoing major upgrades to their infrastructure and amenities.

Of note amongst the findings: