JJ Watt is the NFL’s best defensive player, capable of superhuman displays each Sunday during the NFL season.

But when it was time to meet Jennifer Aniston he performed just like a regular guy.

Fulfilling a lifelong goal of meeting the famous actress for the first time prior to the Gatorade Athlete of the Year Awards in Los Angeles, the reigning NFL Defensive Player of the Year and walking quote machine admitted that during the meeting he was suddenly, and unexpectedly, at a loss for words.

“If I run into her again, hopefully I’ll have more topics of conversation that actually stay in my brain,” Watt quipped. His only regret besides blanking out like a mere mortal? “Not proposing to her. I left the room without proposing. It was a complete disaster.”

Even though Watt got sacked with Aniston, everyone else in the room hung on his every word and it’s easy to see why; he enjoys himself, and his experiences, as much as anyone else.

Thanks to a mix of genuine humility and contagious happiness, Watt was the coolest guy in the room and everyone wanted a piece, something that he wields consciously.

“When you have the power to put a smile on someone’s face just by shaking their hand, or just by signing an autograph, it’s one of the most incredible feelings in the world,” said Watt.

“I don’t know why just walking into a room can make somebody light up, but it’s so cool and who am I to waste that? How many people get to change someone’s life with a hug or a smile? It’s crazy and I’m so fortunate to get to do it.”

The Gatorade Athlete of the Year Award is given to the best male and female high school athletes in the country.

Started in 1985, the list of past recipients reads like a who’s who list of athletic stars across multiple sports. Emmitt Smith, Peyton Manning, Derek Jeter, LeBron James, Dwight Howard, Allyson Felix, Candace Parker and Kevin Love have all won the award.

Hill is the fastest Junior (under 20) in the world and has won 89 consecutive races.

Allen, the Texas A&M commit never lost a game as a high school starter (43-0) and won three consecutive state championships, exhibited a level of maturity beyond his 17 years.

While the event marked the culmination of success at the high school level, it also served as a coronation, an introduction to the new challenges and changes of the next level.

Greek philosopher Heraclitus famously said “Change is the only constant in life.” And though change for the high school athletes on hand may have been the most glaring, and celebrated, examples, each of the Gatorade professional athletes featured during the awards had recently enjoyed major success, and major shifts, in their professional lives.

“Jeez Louise, what day is this?” Said Abby Wambach when I asked her what her life has been like since winning the women’s World Cup. “The last nine days have been some of the most surreal experiences I’ve ever had. Not only because people and celebrities are talking about us; Taylor Swift wants us at her concert, or I get to be at this Gatorade Player of the Year event, but because it is the completion of a lifelong goal (winning the World Cup) is what it’s really all about.”

“There are a lot of professional athletes here and they’ll say you know it was amazing inking that $100 million dollar or $200 million dollar contract, whatever it is like J.J. Watt, but there really is nothing like winning. And you can’t put a price tag on that. I’ve just had the most wild couple of days, it’s just been awesome.”

WNBA star Candace Parker knows how it feels to win the award. The 2004 Gatorade Female Athlete of the Year also felt weird about the realization that it had been 11 years since she won.

After seven seasons in the WNBA and winning every individual award possible, she has one final goal. “I want to win a championship; that’s the last thing I have to check off on the resume.”

Speaking of championships, Draymond Green is still giddy from collecting his as a member of the NBA champion Golden State Warriors. “Every time I think I got it, I catch myself sitting there like, Wow, we won the championship. It’s still kind of surreal. It’s settled in a little more now but it’s amazing, the feeling, the accomplishment in itself to be able to win for my brothers, for the city of Oakland, for the Bay area, it’s been 40 long years without it and it’s an amazing feeling. I can’t say there is anything else that I’ve been a part of, that I’ve done, that’s happened to me that can really compare to the feeling that I got from that.”

After a day of hanging out with some of the biggest names in sports, we longed for the contrast of a dimly lit, barely populated dive bar. And we found one, called the R Bar on 8th street in beautiful downtown Los Angeles, that required a password (Clever Girl) upon entry.

Though karaoke is something I consciously avoid, my friend and cameraman, Matt,
absolutely loves it and he signed us up to sing a duet. While nervously awaiting our turn to rock the mic, we noticed that Hollywood icon Kiefer Sutherland was one of roughly nine people in the bar and we inadvertently ended up opening for him.

In a scenario like that, you have to rock a classic and hope for the best; worst case scenario the song itself carries your lack of vocal talent.

With a stirring rendition of the Dr. Dre classic “Nuthin’ But A G Thang” featuring Snoop Dogg, we gave Jack Bauer all he could handle because, of course, there is nothing cooler than two white guys from Nebraska, completely over-dressed for a dive bar, physically representing the seminal role that Death Row Records played in our youth.

But the Lost Boys star was undeterred. He casually stepped to the mic and blasted out a free-form rendition of the classic Sister Golden Hair by America.

In our never-ending quest for objectivity, we asked two women we met earlier at the bar whose performance was better and the answer was unanimous – Kiefer’s.

His shirt was also better; a clean, pressed, white button-down paired with casual slacks; he truly looked great. Kiefer was an awesome dude.

Once word spread that he was at the bar, the crowd swelled from a nine people to a total of about 30 and almost every person introduced themselves. He shook hands with every individual that came up to him and posed for pictures, enjoying it as much as anyone. 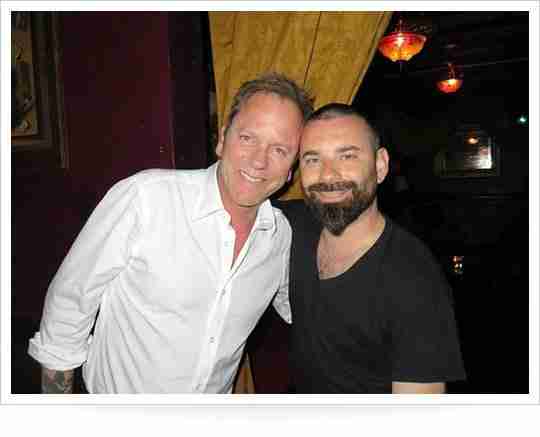 When Matt approached Kiefer and delivered a shot of Patron Silver (the bar didn’t carry Jose Quervo Gold, of which Sutherland is famously the pitchman) he not only accepted the shot and posed for a picture, but he complimented his karaoke performance as Snoop to my Dre.

It was a great moment and perfect end to the day, and, the Gatorade Athlete of the Year experience.

What do J.J. Watt and Kiefer Sutherland have in common? They appreciate and enjoy their success as much as anyone and are happy to share it.

3 thoughts on “I Went To L.A. To Interview JJ Watt & Sang Karaoke Vs. Kiefer Sutherland”