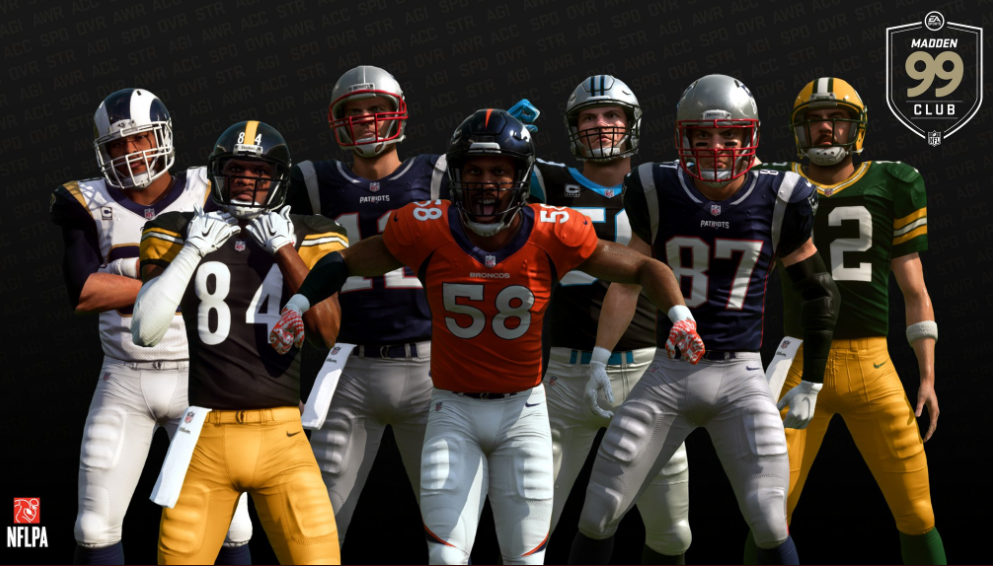 Madden 99 Club was initially launched as part of Madden NFL 19. For Madden 21 prior to start of the NFL season, four more players earned the distinction.

What is significant about 99? A 99 OVR is the highest rating possible in Madden. During the season, ratings are updated on a weekly basis based on the real-life player performance and skill set, so attributes like Speed, Catch, and Tackle are all accounted for.

2/3/21 UPDATE: To commemorate his retirement Tom Brady has re-joined the Madden 99 Club. As far as I can tell he is the first player ever to make the 99 Club, get removed, and then get re-added all in the same season.

For a deeper dive, read my article “Tom Brady Madden Ratings Thru The years: by clicking here.

Merry Xmas to Myles Garrett and his 15 sacks!

This is the 6TH Time for Brady, a Madden all-time record.

And after a BEASTLY 2020 season, Madden got this one right.

Madden 22 player ratings are slated to be announced all week. This week we will find out the 99 Club members for Madden 22.

Donald was named 2020 NFL Defensive Player of the Year for the third time in four years. He is one of the greatest defensive players in NFL history.

The highest paid defensive back in NFL history now has the most illustrious of all awards the 99 Club.

7/30/21: Patrick Mahomes is the fifth member of the 99 Club. Possibly the lowest level of intrigue for a player, ever, considering he is on the Madden 22 cover.

Do you think reigning NFL MVP Aaron Rodgers is pressed about this? I can see him threatening to retire from Madden if he doesn’t get his way. 😂😂😂

For Madden 20, EA Sports announced four Madden 99 ranked players before the season — and added Patrick Mahomes on 9/26, Christian McCaffrey on 11/21, and Michael Thomas on 12/23:

The ratings in modern Madden fluctuate, thanks to the advent of online servers. These ratings used to be locked for the year and now move a bit as the season goes along depending on how players play. Which is why in Madden 19, Bears defensive stud Kahlil Mack and Saints QB Drew Brees were upgraded to 99 ratings during the season.

So that got me thinking; out of all the versions of Madden for the last 20+ years, back to 1998, how many 99 OVR ratings had been given out? And, did you know that Madden used to give ratings of 100?

Ready for a run through history? Here is the full list, by year and version of the game starting with Madden 1999:

Madden 99 Club: None
The game featured no players with a 99 OVR rating, however it had a few players with the highest rating of 96 OVR.

Chuck Cecil And When Men Were Men