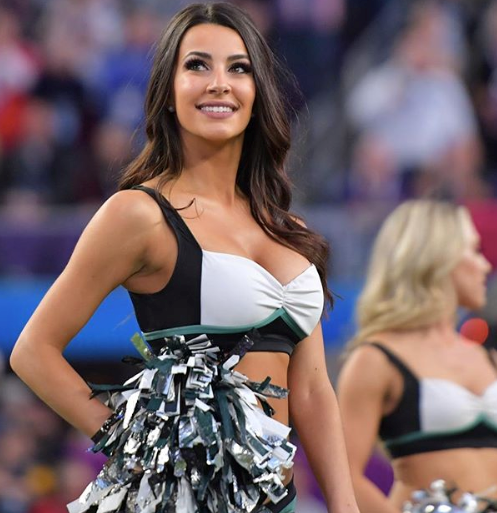 You can consume this list of the Top 10 Hottest NFL Cheerleaders by going slow and scrolling thru the list, or eat your desert first and skip to #1.

In this one, I’m sticking just to the NFL, which makes this a little bit than easier running through 60-plus teams to try and narrow it down to 10 girls.

However, only picking 10 out 26 teams (Fun Fact: six teams do not have cheerleaders: Bills, Bears, Browns, Packers, Giants, and the Steelers), is still daunting. And just as it is in the jungle per its laws, some fine, deserving ladies are going to get left by the wayside. But to keep it fair, there will be no duplicates from our last list. 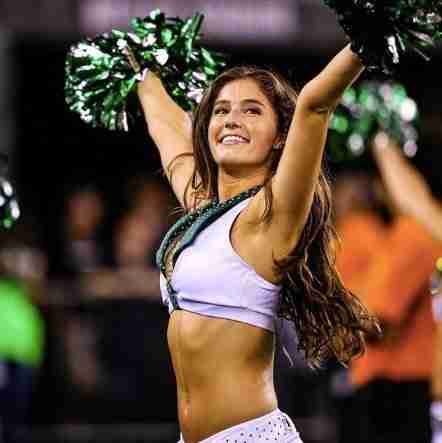 At number ten, we start in the big apple with the team that actually has a cheerleading squad to meet Jenna. She’s a NY native and a four-year vet with the Jets and is one of the hottest cheerleaders in the NFL, finally getting the attention she deserves after putting in her time. 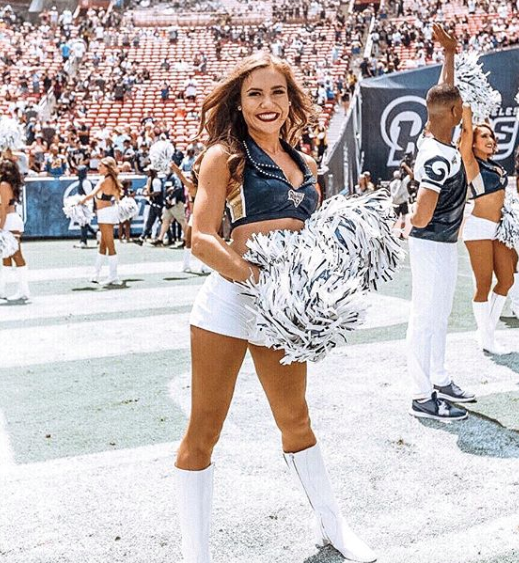 If you read our last list, you would know that coming in at the number spot was none other than Rams cheerleader Justene. Now we have her teammate, Valerie, sitting pretty at number nine on this list. The Rams are a hot pick this year from many experts and they have the cheerleaders to match. Valerie is a Cal State Fullerton alum and is heading into her second season. 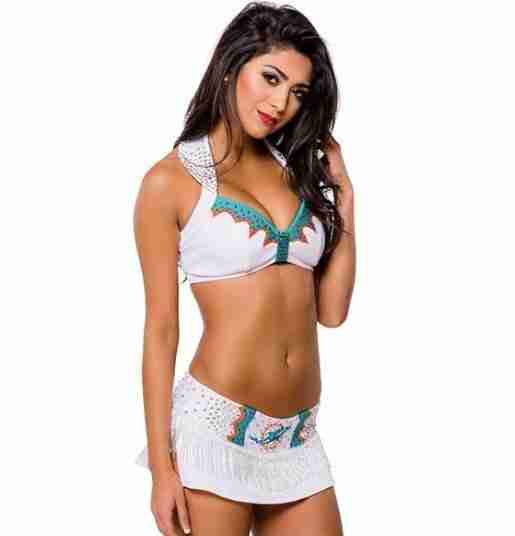 At number eight, we’re heading down to South Beach to meet Kelly. You might remember Dolphins cheerleader Agustina, who was slotted at the ten spot in our last list. Yet another teammate duo making the top tens. Kelly is originally from Texas and will be starting her second year with the squad this fall. 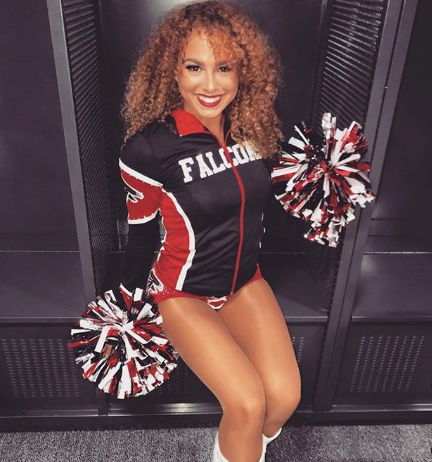 This week, Sports Illustrated predicted the Atlanta Falcons to become the first team to win a Super Bowl in their home stadium this year. That was enough for me to feature one of their cheerleaders on this list. At number seven comes Priscilla, who is entering her third season and was essentially born to do this. Back in the 90’s, her mom was also a Falcons cheerleader. 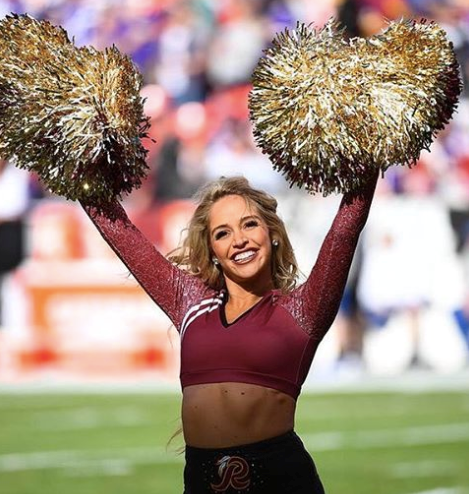 Let’s round out the first half of our list in D.C. by meeting a First Lady of Football. That’s the actual name of the Redskins cheerleaders and for my money, by far the best name for a cheer squad in the NFL. Heather comes in at number six and fittingly, is entering her sixth season as a First Lady. A true veteran of the game.

I figured if an Eagles cheerleader wasn’t going to make our overall top ten list, then the defending champs had to be represented on this list. And kind of like the roster on the field, this cheer squad is loaded with talent from top to bottom and it didn’t make this decision very easy. I ended up going with Vanessa, a second year member, who’s straight out of Philly and is currently a student at Temple. Still in college — and one of the hottest NFL cheerleaders God ever created. 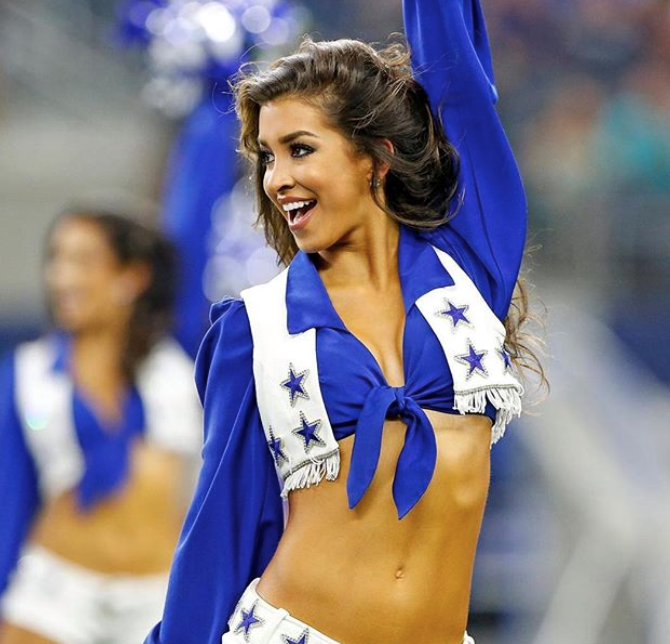 Just like last time, no top cheerleader list can exist and not feature the O.G. Dallas Cowboys cheerleaders. Any list that doesn’t have at least one DCC on it is immediately invalidated in my book. DCC Lexie made our overall list last week and now her teammate Lacey comes in at number four on our list today. She’s been with the squad for a few years now and has become one of the more popular Cowboys cheerleaders we have. 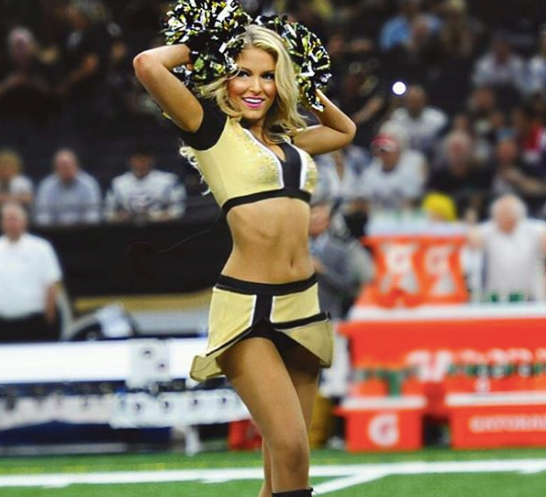 Coming in at the number three spot is Saints cheerleader Abigale. She’s originally from division rival city Tampa, but spent her college years in the Saints backyard at LSU. I kinda like the fact that the Saints use LSU as their own little minor league system to bring these girls up to the big leagues. She’ll be entering her 4th year as a “Saintsation” this fall.

We’re finally down to the top two of our list and it features two teams that were not on our original list. Look, I’m trying to spread the wealth a little bit around here. I don’t want to double up too much. At number two, we meet Tampa Bay Bucs cheerleader, Brittany. Originally, from Fort Myers, FL, Brittany is heading into year 4. You have to imagine she’ll be one of the few things Bucs fans can cheer at this year. 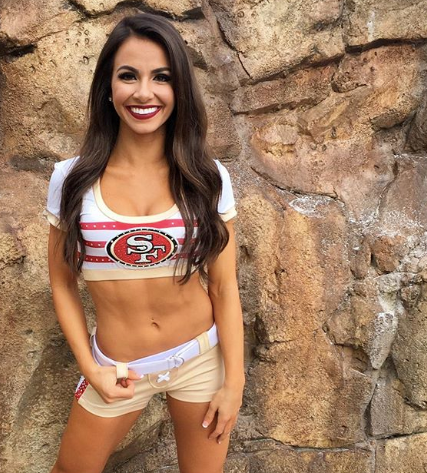