A Trae Young jersey has many variations. One of the reasons his net worth is so high. Not only is he a great player, but fans love him.

As evidenced by his ranking on the 2022 Top Selling NBA jerseys. A Trae Young Jersey is the 8th most popular jersey sold out of all NBA players.

Possessing limitless range, there isn’t a shot Trae Young can’t hit on or off the floor. His ascension since blossoming into a star in college at Oklahoma has only continued in the NBA with the Atlanta Hawks.

Young burst onto the scene at Norman North High School. He averaged 42.6 points per game as a senior and led the team to the state title game. He later signed with Oklahoma and led the NCAA in scoring and assists during his freshman season.

Young celebrated the moment in style. He was joined by former teammates as his No. 11 jersey was officially raised to the rafters. The Hawks superstar told local reporters that he always dreamed of the special moment.

“It’s crazy as I was here not too long ago,” Young told reporters, via KFOR 4 sports anchor Dylan Buckingham. “I’m still playing and still in my career obviously. … For me to do this early is unbelievable, but I know I got a long way to go, and I am going to keep going.”

“I was working for this moment, but I never believed that it would come true like it is now,” Young said. “It came so quick, and I want to keep going and keep working.”

Whether you want some threads of his from college or a Trae Young NBA jersey, you can’t go wrong representing Ice Trae.

Trae Young’s rank as the 8th most popular, highest selling jersey, is the highest of his career.

The assists and efficiency are career-highs along with his 90.7 percent mark at the free-throw line and 52.3 percent effective field goal percentage.

Much has been made of Young’s defense in his career and still as the team has struggled on this end this season. But his impact on offense is undeniable.

The Hawks told Atlanta Business Chronicle that rookie-year Trae Young (who ranked No. 36 in jersey sales overall) helped lift the team’s total retail sales by 26% from 2018 to 2019, with the jersey sales bump “driving significant growth.” Jersey sales accounted for 19% of the teams total sales in 2020, compared to 10% in 2019, the Hawks said.

How did Young get the number eleven? From an interview with NBA.com:

“My freshman year in high school I was #3 all the way up until then. I started getting my first offers from colleges. That next Summer I changed my number to 11 on my AAU team. And it just felt like everything was going great since I put on that number 11. And it has been going great ever since.”

These are my personal favorite Trae Young Jerseys: 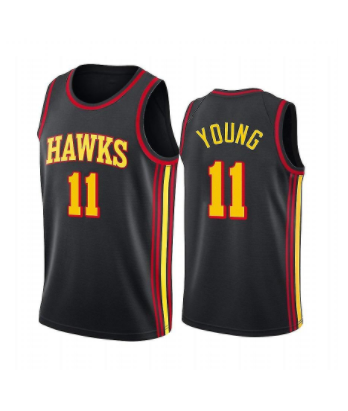 At the conclusion of the 2022 season, Young’s net worth from his playing career will be $26,135,649. He will be a restricted free agent. That will be the end of his Entry Level/Rookie contract.

On 8/3/21, Young signed a contract extension for 5-years and $207 million dollars, the rookie maximum extension. Technically the base contract level is $172 million, but it includes a 30% escalator clause that boosts the value to $207 million if Trae makes one of the three All-NBA teams. 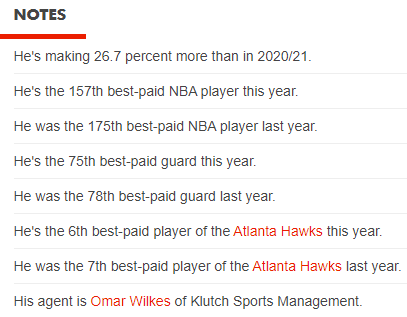 Just before being drafted in the NBA, Trae landed a brand deal with Adidas. The multi-year deal reportedly earns him a massive $1.8 million annually.

Trae Young has a house in his home state of Oklahoma. Trae Young’s house is worth $1.5 million and features a living space of 8100 square feet.

Trae Young has averaged 27.9 points, 9.2 assists and 3.4 rebounds in 14 games against the Knicks in his career. But those numbers do not reflect the agony he has inflicted on the souls of both Knicks players and fans.&nbsp;

The hate goes back to the first round of the 2021 Eastern Conference Playoffs. Thanks to Ice Trae having a ridiculously good and hot-shooting series, the Hawks eliminated the Knicks after a brusining and hotly-contested five-game series.

Trae Young joined Michael Jordan as the only visiting players with 3 straight 30-point games at Madison Square Garden in the playoffs. Young averaged 29 points and almost 10 assists in the series vs the Knickerbockers.

In the elimination game, Young had 18 of his 36 points in the fourth quarter and ended what had been the Knicks’ best season in several years.&nbsp;

In December of 2022, Adidas gifted Trae with some special edition shoes to really piss off Ne Yorkers.&nbsp;

Young wore the adidas Trae Young 2 in a blue and orange colorway. The cherry on top was the slogan “King of Broadway,” printed on the heel of the shoe. As luck would have it, New York destroyed Atlanta, and Young did not play well.

But rest assured, Trae will be back in New York soon, splashing threes from just a step over midcourt.