With every NFL Draft a handful of talented undrafted players slip through the cracks. Sometimes these players are diamonds in the rough and go on to set NFL records and have Hall of Fame careers. Here are the 10 best undrafted NFL players:

Warner’s story is so crazy that if it was in a movie you would probably say it’s too unrealistic. After going undrafted in the 1994 NFL Draft he was invited to try out for the Packers but was released before the regular season began.

Warner’s next professional move actually had nothing to do with football as he took a job stocking shelves at a grocery store in Cedar Falls, Iowa. He didn’t give up on the sport though, as he signed with the Iowa barnstormers in the arena football league. You could look at a list of all NFL teams and not one would give him a chance.

After playing for the Barnstormers and for the Amsterdam Admirals in NFL Europe warner finally found a spot on an NFL roster with the St. Louis Rams heading into the 1999 season.

Warner never looked back after this opportunity as he led the Rams to a super bowl in his first season as a starter and was named the game’s MVP in Super Bowl 34.

He is one of only two quarterbacks to ever win the super bowl in their first season as a starter and the only undrafted quarterback to lead his team to a super bowl win.

Warner made another super bowl appearance later in his career with the Arizona cardinals in Super Bowl 43.

He finished as a:

Warner was inducted into the pro football hall of fame in 2017. Not bad for a former grocery store shelf stocker turned one of the best undrafted NFL players ever.

Lane’s story is another one that seems like it could have been scripted by Hollywood.
After graduating high school, Lane played baseball in an all-African American league
and played football at a junior college in Nebraska. Then served in the Army for four years.

In 1952 Lane stopped into the Los Angeles Rams offices asking for a tryout as the NFL draft was not one of Night Train’s many stops just mentioned.

Luckily for the Rams and Lane they gave him one and he did enough to earn a spot on the roster and the league quickly saw why as he intercepted an NFL record 14 passes his rookie season.

Another fitting nickname could have been Ball Hawk Lane as he finished with 68 career interceptions which ranks fourth in league history.

Lane was a seven time pro bowler and inducted into the pro football hall of fame in 1974. From being a 25 year-old asking for a tryout, to one of the best undrafted NFL players to earning a spot in Canton. What a story Lane’s career is.

The 1978 draft was 12 rounds long yet somehow nobody viewed Moon as worthy of being taken. Well moon’s NFL career wound up having more years than that draft had rounds
as he spent 17 years in the league. In 10 seasons with the Houston Oilers, Moon set an astonishing 37 franchise passing records.

Over his career he became not only one the best undrafted NFL players, but he also:

In 2006 Moon was inducted into the pro football hall of fame making him the first undrafted quarterback to ever receive that coveted gold jacket. Based on how good he was and how tough the jersey looks more people should wear throwback Warren Moon Oilers jerseys.

Tunnell’s path to the NFL was far from what is considered normal today. At the university of Toledo he broke his neck. Then he served in the Coast Guard during World War II before finishing his collegiate career at the university of Iowa. Tunnell went undrafted in 1948 before signing with the New York Giants.

While the path to reach the league was not a straight one, his time in it did get off to a good start as Tunnell had seven interceptions as a rookie playing safety in an era where teams did not throw the ball often.

Tunnell finished with 79 career interceptions which is the second most in NFL history. His knack for the ball played a role in him becoming the first African American inducted into the pro football hall of fame in 1967 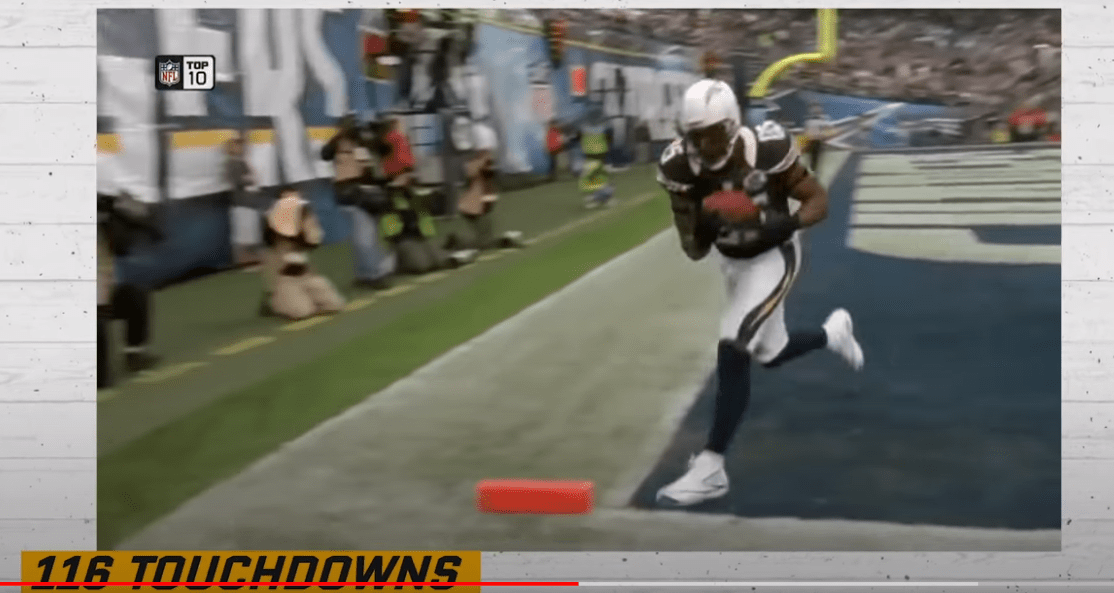 While people will remember him for his time as a football player gates was actually a basketball star in college at Kent state averaging 16.5 points and 7.8 rebounds over his collegiate career.

Gates was too short to play in the nba so he shifted his focus to the gridiron where his athleticism would lead him to becoming one of the greatest tight ends in the game’s history. Signed by the san Diego chargers out of college in 2003, Gates and the team became synonymous with one another.

People came to expect stability and great play from number 85 whenever they turned on a Chargers game and that’s almost always what they got.

Gates spent his entire 16-year career with the team as he was named to eight pro bowls and caught 116 touchdowns which is the most by any tight end in nfl history and seventh most by a player of any position also in terms of just tight ends.

Gates is third all-time in receptions with 236 and third in receiving yards with 11,841.
he hung up his cleats for good in January of 2020 and will almost certainly be inducted
into the hall of fame once he’s eligible. Gates is one of the best the undrafted NFL players ever; a free agent ended up being one of the greatest players in Chargers franchise history.

Another former Kent State Golden Flash, Harrison was viewed as too short coming out of college so he went undrafted in 2002. The Steelers signed Harrison before the season and gave one of the most feared defenders in NFL history his first chance in the league.

The linebacker showed everyone they were wrong for focusing on his height more than his strength. His hard-hitting tendencies and high football IQ led him to:

With the Steelers being known for having some of the best defenses of all time over the years, it’s quite the feat that Harrison is their all-time sacks leader with 80.5

Not only did Brown go undrafted, but he was also cut by the first team who signed him, the Houston Oilers, before ever playing in an NFL game.

The Broncos wound up signing him and brown became a starter in his rookie season. The cornerback was traded to the raiders in 1967 and his time in the silver and black is what led him to ending up on this list.

His iconic moment came in Super Bowl 11 against the Vikings when Brown iced the game with a 75-yard pick six in the fourth quarter.

Brown finished with 54 career interceptions and three super bowl rings and was a four-time pro bowler and five-time AFL all-star before being inducted into the pro football hall of fame in 1984.

I wonder how long it took for the Oilers to realize that they had made a grave mistake by cutting brown.

Randle went on drafted in 1990 after playing division two football in college and being viewed as undersized for a defensive lineman.

The Vikings decided to give him a shot as an undrafted free agent which ended up being a pretty smart idea. Randle put on 50 pounds after entering the league and became a menace for opposing offenses.

Over his 14 season career he had 35 multi-sac games including eight games with three or more. Randle racked up 137.5 career sacks which is tied for 10th most all time and was named to seven pro bowls.

In just his second year on the ballot, Randle was inducted into the pro football hall of fame in 2010. his older brother Ervin was a linebacker for the Buccaneers entering his sixth season with the team in 1990.

I’m not sure if he didn’t tell them about Randle or if they didn’t listen to him about drafting or signing him out of college. But either way Tampa missed out on a future hall of famer. And John wound up having a better career than his older brother.

While playing at a junior college, Joe Perry was called into military service. He then played football for the Alameda California naval training station team. That’s where a member of the San Francisco 49ers saw and convinced the 49ers to offer him a spot on the team.

In 1948 Perry was discharged from the military and signed with san fran. Nicknamed “The Jet” Perry had blazing speed for a fullback at the time. After becoming the first player in the NFL to rush for 1,000 yards in consecutive seasons in 1953 in 1954, the jet was named NFL mvp in 1954 by united press international and became the first African American to win the award.

Perry retired from football in 1963 and finished as the league’s all-time leader in rushing yards at the time the jet was then inducted into the pro football hall of fame in 1969.

Someone should have offered the 49ers player who spotted Perry playing for the naval training station team a front office position after his incredible find and quick evaluation of the jet.

The fact that most football fans are familiar with the name of a kicker who went undrafted in 1946 shows just how good he was. Lou The Toe Groza spent 21 years with the Cleveland browns.

At 6’3 240 pounds he actually was an offensive lineman in addition to kicker. Groza was so skilled at both that he was named the sporting news NFL MVP in 1954 making him the inaugural recipient of the award.

He finished as a:

Groza is considered the NFL’s first kicking specialist and was inducted into the pro football hall of fame in 1974. Additionally he even has an award named after him — the Lou Groza Award — is presented annually to the top college football place kicker.

From Wikipedia: “After the 1994 draft, Smith went undrafted and was signed by the Denver Broncos as a free agent. His first NFL catch was a last-minute 43-yard touchdown from John Elway in a 38–31 win against the Washington Redskins on September 17, 1995.

In fourteen seasons as an NFL player, Smith had eight seasons of at least 1,000 receiving yards.

He was a starting wide receiver of the Broncos’ back-to-back Super Bowl championships in 1997 and 1998.

In the Broncos’ 34–19 win in Super Bowl XXXIII, Smith had 5 receptions for 152 yards, tied for 5th most in Super Bowl history, including an 80-yard touchdown reception.”

Rod Smith could easily be considered the best undrafted NFL player to ever lace ’em up.