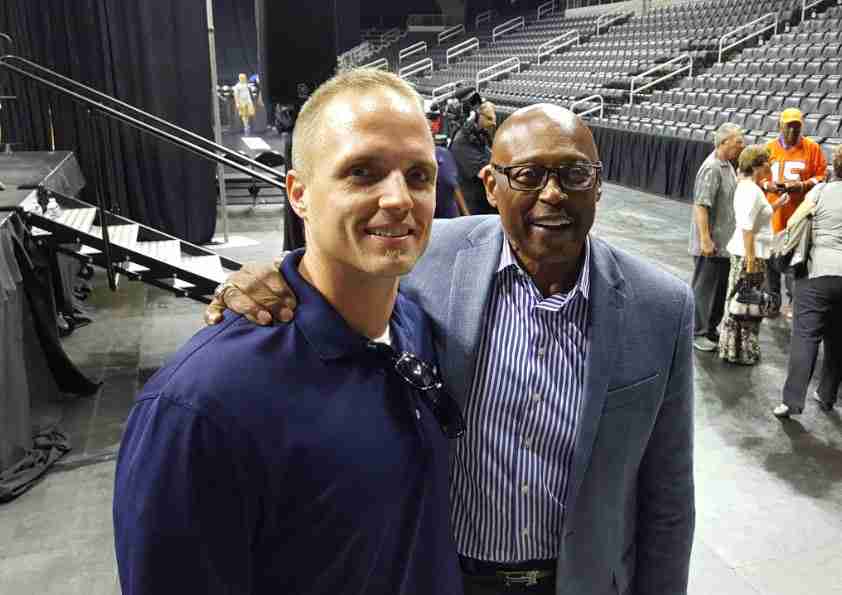 Marlin Briscoe was the first African-American to start a game at quarterback in modern professional football history. And if it wasn’t for him, Floyd Little would have quit.

Lauded by some as the NFL’s version of Jackie Robinson, Briscoe grew up in South Omaha and went to college at Omaha University, since renamed the University of Nebraska at Omaha.

RELATED – Mike Haynes Interview: “We Used To Intimidate The Referees”

His career and impact in the community were commemorated during a Marlin Briscoe statue dedication ceremony at UNO’s Baxter Arena.

As quarterback at UNO, Briscoe set 22 school records, including 5,114 passing yards and 53 touchdowns for his career.

After being selected in the 14th round of the 1968 AFL Draft by the Denver Broncos, his first playing time came as a backup during the season’s third game, sent into action by iconic head coach Lou Saban — Nick’s dad.

Briscoe’s first pass was a 22-yard completion. The following drive, Briscoe directed the Denver offense on an 80-yard drive and he finished it with a 12-yard touchdown run.

The following week, Briscoe started at QB against the Bengals and made history. He finished his rookie season with 14 passing TDs which is still the Broncos’ rookie record.

His season-long pass completion in 1968 was a 66-yarder to running back Floyd Little. And according to Hall of Famer Little and what he told me, the pass traveled over 60 yards in the air, and he caught it one-handed, between two defenders.

Little remembers the play vividly because it set up a game-winning 12-yard field goal by Broncos’ kicker Bobby Howfield on the next play. But more so, he said, because if it wasn’t for Briscoe, it would’ve been his last game as a professional football player.

“Saban was all over my ass that whole game but on the play before, he fired me — right there on the field. So I’m walking off the field towards the tunnel and it hit me; ‘I cannot let my football career end like this.'”

“I ran back out on the field directly to the huddle and completely ignored Saban. So now, we have 12 guys in the huddle. Garrett Ford was a rookie running back in the game for me and I told him to get the fuck out and go back to the sideline.

And he shrugged and slowly headed over. Saban’s yelling all kinds of shit at me and I tell him to shut the fuck up, kiss my ass — you name it.”

“I told Marlin, ‘I need a favor. I need you to throw me the ball no matter what.’ He asked me what route I was going to run and I said, ‘to hell with that, just throw me the damn ball.’

“So we set up, and run a play, and I run straight down the field. And Marlin is short. So I’m looking back at the pile of bodies and suddenly I see this ball just shoot up out of the pile into the sky.

And as I’m running, I notice it’s coming my way. I get to the spot and I snagged that sucker out of the sky with one hand. I looked down and I’m all the way down by the goalline — Marlin threw that ball over 60 yards in the air. Howfield comes in and kicks the field goal the next play and we win.

“Coach Saban came up to me after the game and said I wasn’t fired. Marlin Briscoe saved my career. If it weren’t for him, that would’ve been it for me.”

Briscoe left Denver for Buffalo prior to the 1969 season and switched to wide receiver. He led Buffalo in touchdown catches in each of his three seasons there and in receptions twice.

In 1970 he became an All-Pro. He was then traded to the Miami Dolphins for Hall of Fame guard Joe Delamielleure.

As a member of the Dolphins he won two Super Bowls and led the undefeated 1972 team in TD receptions. Everything worked out for the guy from South Omaha.

Everything worked out for Floyd Little, too.

Little retired as the NFL’s 7th all-time leading rusher with 6,323 yards rushing. During his rookie year, Little led the NFL in punt returns with a 16.9-yard average.

He led the NFL in combined yards in 1967 and 1968. Little was Denver Broncos team captain all 9 seasons, including his rookie season.

He was the first 1,000 yard rusher in Broncos history. He was inducted into the NFL Hall of Fame in 2010.

I attended the UNO Marlin Briscoe statue dedication simply because it’s so rare to have an event this significant in my home state. And as I was capturing images from the front of the stage, I turned around to pan the crowd — and immediately recognized Little.

My awareness of the all-time great was heightened thanks to my interview with fellow Hall of Famer Mike Haynes — a week ago to the day — and a discussion we had about rule changes and how Little, during a recent conversation between the two at this year’s Hall of Fame induction, reminded Haynes that he was only the 13th player to rush for 1,000 yards. And that was in 1971.

I introduced myself to Mr. Little and told him of my recent conversation with Haynes — and for the next 30 minutes he answered every question I had and took me on a ride through NFL history.

And, when a couple of ladies from South Omaha (adorned in S.O.B., “South Omaha Babes” shirts) came over and asked to see his Hall of Fame ring, he took it off and let all of us take turns trying it on.

On the way money changed the game, and the players:

On the annual Hall of Fame induction ceremony:

“Once you’re in, you can go every year. At the beginning of the ceremony, you’ll see every living Hall of Fame member on the stage. But as it goes on, guys start to leave – when you have some guys taking 30 minutes during there speech it’s just too long. They ought to just give ’em the hook. Guys on the stage are using their phones to time each speech. We all loved an appreciated Marvin Harrision’s speech this year.”

On the strongest player he ever saw:

“I was always the strongest guy on the team and I let everyone know it. Several times I made my teammates an offer; I’d lay on the ground flat on my back and throw $100 on the table and tell them if they could stop me from getting up off the ground, they could take the money. The first day I did it, three d-lineman tried, including Lyle Alzado, and no one left with the money.”

Lyle tested me like he tested everyone. And I didn’t back down for shit because I never did for anyone. And I told him, ‘Lyle we can lock horns all you want – every day all day and the next morning I’ll be at your door ready to go again. I will never stop.’ We always got along.'”