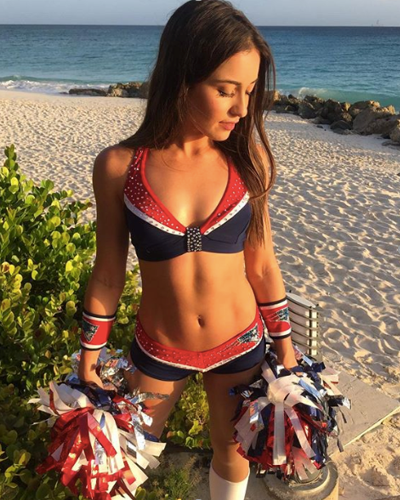 I think we can all agree that it is extremely difficult to take the hundreds of Hot Babes that are cheerleaders and dancers across the NFL and NBA, narrow them down to ten people, and them rank them in order. But that’s what we’ve attempted here.

I went through 60-plus Instagram pages for these cheer squads and tried to pick and choose the top 10 hottest cheerleaders to the best of my ability. Now, obviously, multiple fine ladies are going to get gypped here, but that’s the internet for you. Not everyone is a winner. And this is’t just a hottest NFL cheerleaders list. So, now, let’s take a look at the top ten hottest cheerleaders as we head into the fall sports calendar. 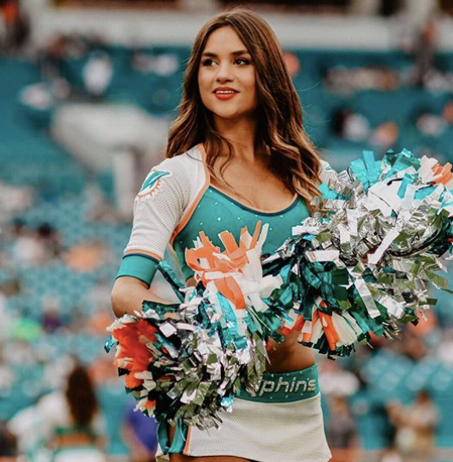 We’re starting down in South Beach for our number ten spot to introduce Miami Dolphins cheerleader, Agustina. According to her bio, she’ll be heading into her 3rd year with the Dolphins and is a native of Capital Federal, Argentina. I actually think she might have some things to cheer about this season, because I think Tannehill and the Dolphins could surprise some people and find their way back into the playoffs.

Coming in at number nine, we will stay in the AFC East with the team you can pretty much pencil in to win that division every year as long as Belichick and Brady are there. Let’s meet Pats cheerleader, Isabella. She’s also heading into her third year with the team and is a masshole through and through. She’s currently a student studying at Boston College and spending her Sundays cheering for the greatest team we’ve seen over the last 15 years. 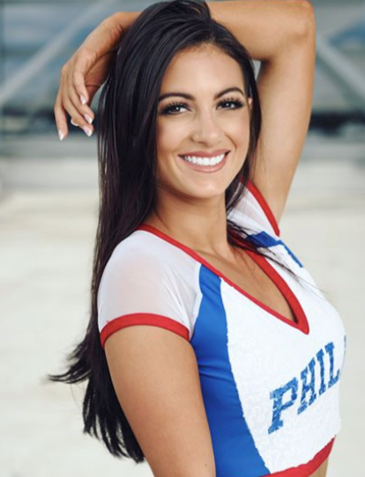 At number eight, we make our first trip across sports over to the NBA. Now, in the association, they don’t really consider them cheerleaders, instead they’re dancers. But the idea is the same. They entertain during breaks in the action and get these drunk men all horned up. So let’s meet Sixers dancer, Gabriella. She has no bio page on the website, but after digging a little deeper we found she’s been with the team since 2017. So doing the math here, this will be her third year as a dancer. Should be a lot of fun this winter with the squad they’re trotting out on a nightly basis. 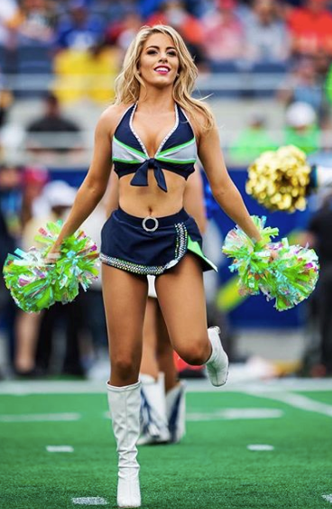 Back to the National Football League for number seven and we’re heading out the Pacific Northwest. I’ve come across my fair share of cheerleaders in my time writing on the internet and I have to say, the Seahawks consistently have one of the best looking squads around. This was a tough decision, but I went with Hailey. She’s University of Washington grad and spent time on their dance team. She’s heading into her fourth season this fall. 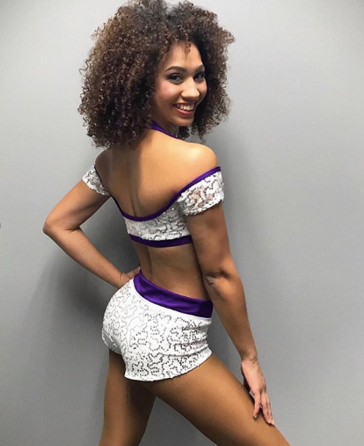 You know this list couldn’t exist without featuring a Laker Girl. It’s like doing this list without featuring a Dallas Cowboys cheerleader (we’ll get to that later). Laker Girls are by far the most famous NBA dance team. Ever heard of Paula Abdul? Coming in a number six, we have Laker Girl Makayla. She just wrapped up her first year and is heading into season 2 with the privilege of watching LeBron every night. Lots of national TV games which means the Laker Girls are BACK. 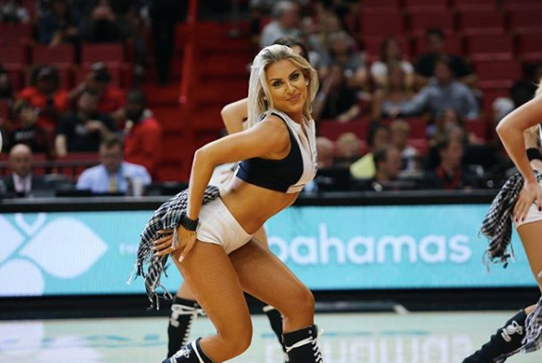 We’ve officially made it to the top five and let’s go back to where we started this list – Miami. I feel like Heat dancers are just below the Laker Girls when it comes to best dance squad in the league. Although, Joel Embiid actually called them the best back in February, so take that however you want. Also Miami Heat head coach, Erik Spoelstra, married a former Heat dancer, so you might actually be able to make an argument for them against the Laker Girls. Today we meet Kristina, who’s an FIU alum and entering her third season this winter. 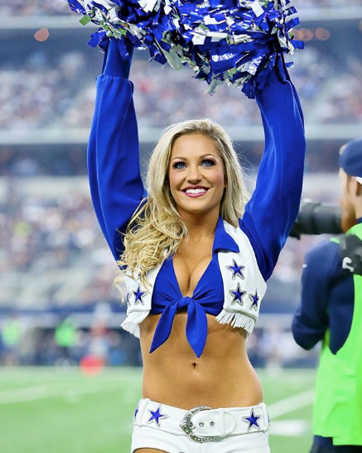 I mentioned this earlier, but I’ll say it again: you can’t have a list ranking cheerleaders without featuring the Dallas Cowboys cheerleaders. They’re the OG’s, the GOAT’s, if you will. You think cheerleaders, you think the DCC. Obviously, that means picking the hottest one to go on here was down right impossible, but I managed and went with Lexi. Somehow, the DCC doesn’t have bio pages for their girls, but I took a gander at Lexie’s IG page and determined that this will be her second season with the ‘Boys. Before jumping to the NFL, she was actually a Mavs cheerleader. 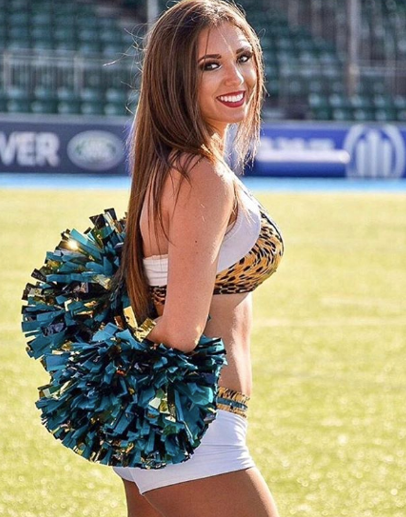 For the number 3 spot, we’re going to Jacksonville, aka one of the trendier Super Bowl picks heading into this NFL season. They have that #1 defense returning after an AFC title game appearance, so I can see why people love this team. Not only that, however, they also bode a top 3 cheerleader in Rachel. She’s going into year 4, which is usually when superstars make the jump to the next level and she has MVP kind of talent. Not to mention she’s legal secretary in her down time. Total package. 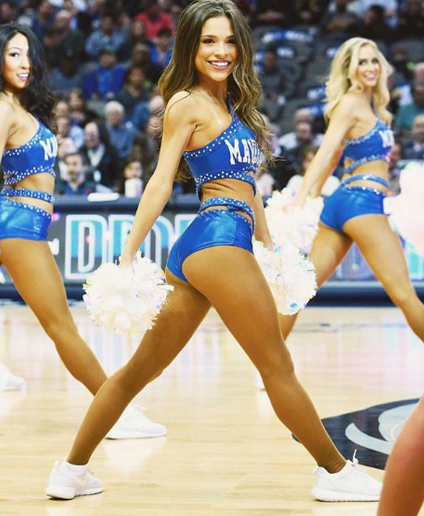 Back to Dallas for our number two hottest cheerleader, but this time we’re on the hardwood. It might be a little surprising to some that we have a Mavs cheerleader ranked ahead of Cowboys cheerleader, but you have to trust me on this one. Alise here is an absolute ROCKET, who could’ve easily been slotted at number one on this list. She’s straight out of Dallas’s backyard of Arlington and will be going into her second season this winter. 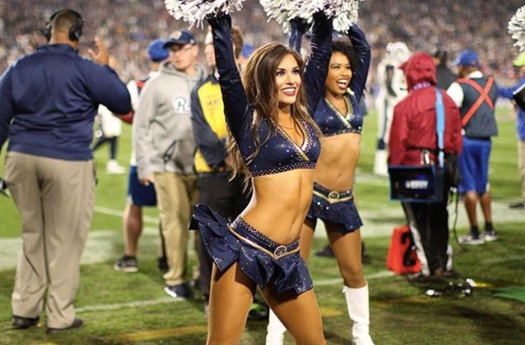 Finally, we’ve made it to number one and like I said with Alise, pretty much any of these ladies could’ve been rearranged in any order. However, my definitive #1 pick had to be Justene from the hot NFC Super Bowl pick LA Rams. She’s the total package. She’s as hot as they come, she has a serious dance background with multiple professional teams, and is currently Miss Montana. Not sure you could ask for more from the number one spot.

Keep reading (or just look at the pics):

Mobile Dating: 64% Cheat While In The Same Room As Their...