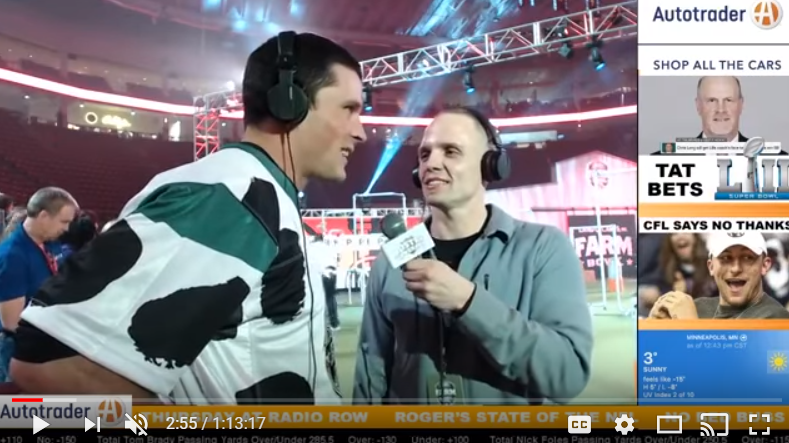 Carolina Panthers linebacker Luke Kuechly is the kind of impact player that NFL teams envision when they select a player in the top ten of the NFL Draft.

Selected ninth overall in the 2012 NFL, he was named Defensive Rookie of the Year that season and NFL Defensive Player of the Year in 2013.

What can he do for an encore in year three? Kuechly’s eyes are set on the Super Bowl. Kuechly’s old-school physical style and “Smelf-confidence” lends itself perfectly to a partnership with old-school icon Old Spice.

Talk about the partnership with Old Spice.

“I partnered up with them to talk about the hair product that came out earlier this year. There’s shampoos, conditioners, different gels. The biggest thing behind them is the simplicity to use the product. You can use it real quick and don’t have to take a whole lot of time. We use it quite a bit in the locker room. I passed it out to some of the linebackers and everybody is loving it right now.”

At every level you’ve played, you’ve been a tackling machine. How do you account for this? What do you do differently?

“I’ve always had a great group of guys around me. At Boston College, Bill McGovern (former DC) did a great job and he is the reason why I developed in college. And when I got to Carolina, I had some older guys around like Jon Beason [and] Thomas Davis that taught me a lot, and I learned what it takes to be successful. So I owe a lot to those guys for the success I’m having today.”

What makes the Panthers defense so physical? Every defense in the league tries to be what you guys are. What’s the secret?

“I think it’s a mindest. To play physical and establish the line of scrimmage and make physical tackles and force turnovers. We’ve had a couple meetings in OTA’s this year and that has been the message; to be a physical team, to push guys back and make plays… Our coaches preach being one of 11 for the defense. Do your job, take care of your responsibility on each play and try not to do too much. If each guy does his job and does it correctly, that’s 11 guys doing the same thing and that puts you in a position to win games.”

Who was your favorite player growing up?

“Ray Lewis or Brian Urlacher. Those guys played hard and played a long time at a very high level.”

How do you feel about the Urlacher comparisons?

“I think you’ve got to look at how long Brian played, how high a level, the Pro Bowls, he’s been to a Super Bowl; I think that’s the most important thing. I’ve played two years and that’s it. It’s cool to look at it now, but I have to keep looking forward, keep working.”

Who would win an arm wrestling contest between you and Urlacher?

Who is the one player you look forward to tackling the most?

With him is it like fighting a guy and there happens to be a football involved?

“It’s weird. He’s wild and strong and powerful. He knows what he’s doing, but he’s kind of all over the place.”

What’s it going to take for your Panthers defense to be remembered as one of the greatest of all-time, like the 70’s Steelers, 80’s Bears and 2000’s Ravens?

“You have to have a body of work over the season. Then you’ve got to ratchet it up in the playoffs. Then you have to win a Super Bowl. That makes people remember the team, and then when they look at it, they realize the defense was the strongest part of that team. We talked about that Ravens team the other day and how dominant they were, how many points they scored on defense. It’s a good team to look at because they played as a team and they had fun.”