AP and Gore are inextricably linked.

How rare is what AP and Frank Gore are doing?

Only six other backs in NFL history played beyond 35 years of age: Riggins, Marcus Allen, John Henry Johnson, Joe Perry, Hugh McElhenny and Ollie Matson. All of those backs are in the Hall of fame.

Initially this article was published with 5 games remaining in the 2019 season. Since I love both of these running backs, and for their places in history, where every game is essentially breaking or getting closer to breaking a record, I will update this page frequently.

Is this the last week of action for Adrian Peterson and Frank Gore? Frank Gore was inactive.

Adrian Peterson carried the ball seven times for 63 yards and scored the 124th TUD rushing of his career. That puts him one TD behind Walter Payton and two behind Jim Brown for 10th most all-time.

A quiet day at the orifice for AP, with 4 carries for 10 yards. Meanwhile for Frank Gore it was the exact opposite!

With 14 carries for 48 yards, Frank Gore became the 3rd RB in NFL history to rush for 16,000 yards, joining Walter Payton and Emmitt Smith.

AP’s 117th rushing TDs are 4th most all-time. He is 6 TD behind Marcus Allen for third.

In Week 15, Peterson had a modest 6 carries for 23 yards. Gore on the other hand…almost the exact opposite of AP.

FG = In week 13, Gore had one carry for 2 yards, got concussed, and missed the rest of the game. Week 14 he was back but lost a fumble, otherwise contributing 8 carries for 23 yards and one reception for 8 yards.

Week 15, Frank Gore scored the 81st rushing TD of his career. In an upset victory against the Rams Gore toted the rock 23 times for 59 yards and 1 reception for six yards. The 23-20 win was the Jets’ first win under Adam Gase in 2020, almost a year since their last victory.

The rushing TUD tied Gore with Ottis Anderson for the 19th most in NFL history.

His next rushing TD will tie him with Corey Dillon in 18th place. Gore is only 2 TD from tying Packers legendary RB, Jim Taylor.

What a TREMENDOUS Week 12 of the 2020 season for both backs!

Adrian Peterson started and toted the rock 15 times for 55 yards and 2 TUDS in a Thanksgiving loss to the Texans.

Both Peterson and Gore have exceeded usage projections in 2020.

With the release of Le’Veon Bell by the Jets, Gore became the starter and has started all but one game for Adam Gase.

Gore has since moved on and signed with the New York Jets and will actually start at RB in week 2 and should receive a heavy workload due to the injury to Le’veon Bell.

Everyone thought he was dead several times and he just keeps coming back and producing. Look at Peterson’s stats over the last 5 games of 2019:

Adrian Peterson ended 2019 with 898 rushing yards and a 4.3 yards per carry average.

Peterson got cut by the Redskins and less than a week later, ran for 93 yards on 14 carries and looked like a 25-year old for the Lions v the Bears. It was incredible; he is the only back I’ve seen in my lifetime that could do something like that after being consistently told to “DIE NOW.”

He needs 960 yards after his performance in week one to tie Barry Sanders for 4th all-time. But at this rate I am NOT doubting AP!

He most recent TD passed Walter Payton for 4th most rushing TD ever. He needs 12 to tie Marcus Allen for 3rd most. This is all DOABLE for this monster. And full disclosure I’m a Bears fan so there is no reason I should be rooting for him except that he is a titan of a player.

The consensus is that he will enter the NFL Hall of Fame soon after he retires.

(Related – Adrian Peterson Handshake – I Tested His Grip At The ESPYS!)

What does this mean for Adrian Peterson? It means he is also a Hall of Fame running back. Even though people seem to forget about him. Much like they have done to Gore.

While Gore is third, AP has the 6th most rushing yards in NFL history with 13,861. 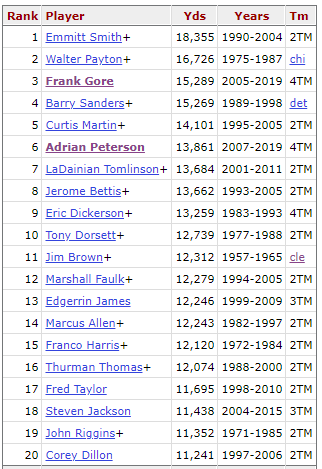 So far in 2019, Peterson has quietly passed Jerome Bettis and LaDainian Tomlinson and ascended from 8th to 6th. He is 240 yards behind Curtis Martin for 5th place.

But how much do Frank Gore and Adrian Peterson have left in the tank?

Peterson is averaging 54.3 ypg in 2019. With five games left, he is on pace for 272 yards. Which means he would pass Martin and end the season with the fifth most rushing yards in NFL history.

With five games left, Gore is averaging 49.2 ypg. Which means he will end the season with 246 more yards and be just under 1,200 yards shy of Sweetness. To eclipse him, he will need to play two more seasons at his current production.

Comparing their production, you realize how similar the careers of Frank Gore and Adrian Peterson have been.

Based on his career ypc average of 4.7, that gives AP 2,632 more yards. But that is merely hypothetical – and fun to think about.

If Gore retires after 2019, AP would pass Gore for third all-time in 26 games, based on his current average ypg of 54.3. Possible, but not probable. But if anyone could stick around, AP is the guy.

What about rushing touchdowns? This is where Peterson creates seperation from Gore. 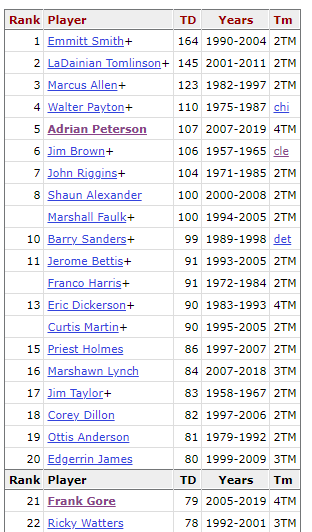 Adrian Peterson has 107 rushing touchdowns which is 5th most in NFL history. He is three TD away from tying Walter Payton for 4th with 110.

Frank Gore is 21st all-time with rushing 79 TD. He is one TD away from tying Edgerrin James for 20th.

What about most total touchdowns? 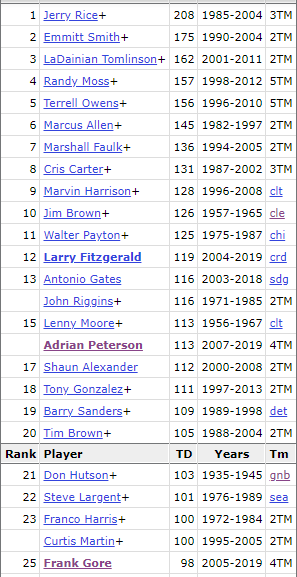 Which running back has the most yards from scrimmage in NFL history – Gore or Peterson? 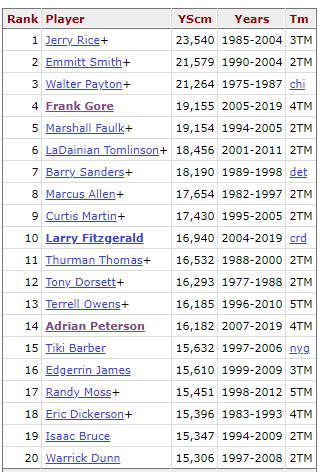 Interestingly, and to much less acclaim, Gore also passed Marshall Faulk for fourth place on the NFL Yards From Scrimmage list with 19,155 total yards.

But Peterson weighing in at 14th all-time is nothing to sneeze at. And frankly, more than I thought he would have.

Entering the last 1/3 of the 2019 NFL season, we are watching two of the best running backs in NFL history wind down their careers at the same time. Which is a real treat for NFL history buffs.

So who is better – Frank Gore or Adrian Peterson?

After analyzing all this data, I think both players are Hall of Fame caliber and should ultimately be inducted. Statisitcally, in an era where RBs have been completely devalued, they have both produced at historic levels.

Both backs have had such similar, and successful, careers that it becomes a matter of personal preference.

How do YOU take your RBs?

Want speed and power? AP is your guy. Want shiftiness and great hands? Gore is for you.

In the meantime, we should enjoy every remaining carry for both Frank Gore and Adrian Peterson. And realize that each player has had a special career before they are over.

2 thoughts on “Frank Gore Vs. Adrian Peterson – Who Makes Hall Of Fame?”