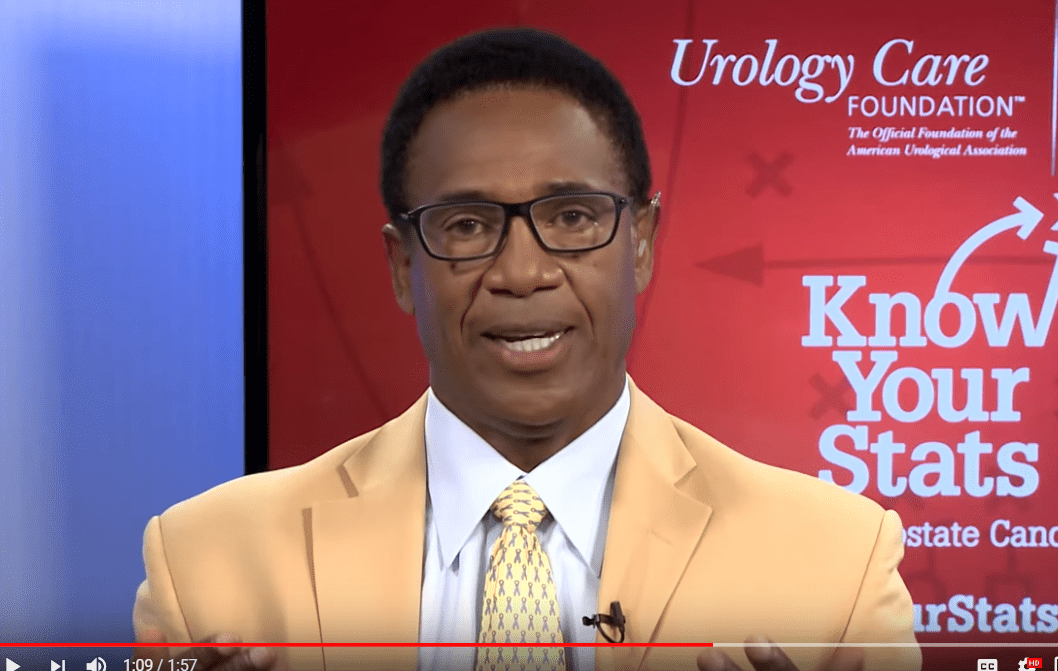 Mike Haynes is arguably the greatest cornerback in NFL history.

He was also one of the greatest punt returners the league has ever seen. Watching his highlights now, he reminds me of what Deion Sanders would come to be. Mike Haynes was the original shutdown corner.

A throwback to a bygone era, he is the embodiment of what iconic NFL voice John Facenda was speaking about in this quote:

“Pro football is a mirror of early America, reflecting toughness, courage and self-denial. The game is perpetual motion, a swirl of flying bodies and constant collisions. A 2 1/2 hour carnival of color, sound and action.”

I spoke to nine-time Pro Bowl cornerback and NFL Hall of Famer Mike Haynes about his career, when the NFL was still a measuring stick for each of the attributes Facenda fixated upon.

Watch this video where Haynes recalls a fantastic Lyle Alzado story and watch his face light up:

Read below or listen to our entire conversation via Soundcloud here:

I-80: How did you stay productive in at least three eras – the Steelers’ era of the late 70s, the 49ers‘ era of the 80s, and into modern passing game era – and remain one of the best corners in the game even though the league changed so much?

Mike Haynes: Just blessed I guess. The rule changes have changed the game so much – a lot of people are not aware of the importance of the rules and how they affect the game. There was a time when the hashes were wider. And when the hash marks were wider it was very rare that a running back would rush for 1,000 yards. Floyd Little of the Denver Broncos, I recently had a conversation with him about this, and he shared the story that he was the 13th running back in history to rush for 1,000 yards in a season – it was a huge, huge milestone. Today it’s not a huge milestone. Now, it’s almost commonplace for a guy to rush for 1,000 yards as a running back. So, that (rule change) created a huge difference in the running game.

Then later, they changed the rules for passing. And made it more wide open, making it tougher for defensive backs to cover wide receivers. And that made it a better situation for quarterbacks to throw the ball, even when it appeared the receiver was covered. Because as long as the defensive back is not looking back for the ball, there is going to be a penalty.

It’s tough to play in the secondary – it’s tough to be a defensive player — today much more so than in the 70s.

1972 is the year the hash marks got moved and that was one of the things I wanted to ask you about. And I’m fascinated that no one ever talks about because that was a huge turning point in the evolution of the game. In your estimation, what was the last benefit the defensive side of the ball ever got in any of these rule changes?

Mike Haynes: (Belly laugh) I don’t think they even take the defense into consideration when they make rule changes – they take you guys; the fans! You guys are the ones they are considering. It’s like, how can we make our game more exciting – how many fans love a 7-3 football game?

Mike Haynes: Well I am too. Because I know how important that is. I feel the anxiety and the energy in those 7-3 battles. But today, if a team can’t score 21 or 28 points, something is wrong with that offense. The coach may be fired; his job may be in jeopardy. Anyway, it’s a different game but I still love the game. The game used to be a violent game. When head-slapping was legal. When you were really trying to hurt your opponent. Those days are gone. They are gone. And I don’t think they will ever come back and for good reason they are gone.

From a fan standpoint, it’s a better game, it’s much more fun to watch. And from a player’s standpoint, hopefully players will be able to play a long time and won’t have to worry about health issues from playing the game in their old age.

I wasn’t on the field during the head-slapping days, but I loved that era. It was as much a fight as it was football. How were you able to maintain focus and what’s your thought process like in a scenario like that where it almost seemingly benefited guys who weren’t thinking in higher terms, that were making it into a brutal combat sport versus all the intricacies of the position you played?

Mike Haynes: I actually think that when I came into the league I was a brutal football player. I was actually trying to hurt my opponent. One of my teammates, a guy named Darryl Stingley, was paralyzed on a hit by Jack Tatum in a game against the Raiders. It kind of changed my life. I realized that could have been me that made the hit on Darryl Stingley. I almost retired because I realized that is not what I should be trying to do. That’s what I wanted to do – I wanted to hurt them. I didn’t know how to play football without thinking that way. At that time a lot of guys called me because they knew I was thinking about retiring because of the hit, and that changed my life. ‘No Mike – hit us hard, just help us up.’ It changed my mindset.

But they had no idea how in the locker room I’d just sit there and sit there and get myself psyched up to go out there to be this mean son of a gun that was going to hit hard and try to hurt people. And what do I do now – what am I psyching myself up for?

The game has changed and now it’s a collision sport, not a violent sport. And that’s the biggest difference. I hope fans still appreciate the sport and love it, because I haven’t lost my love even though it’s made a transition from a violent sport to a collision game.

A couple of years after the Stingley hit you got traded to the Raiders. And that Raiders’ team was tough. You had guys up front like Howie Long, Lyle Alzado and some nasty guys in the secondary. It was built on brutality in a lot of ways. Wasn’t it?

Mike Haynes: Not brutality. It was built on intimidation. We intimidated our opponents. First of all, we had a bunch of tall defensive backs. Every single defensive back was at least 6’ 1”. All of us weighed at least 200 pounds. We were the biggest secondary, the fastest secondary and we had a defensive coordinator named Charlie Sumner who loved to play offense on defense. He went after people. On 3rd and 18 situations, he’d call an all-out blitz. He didn’t care. It was about the intimidation factor.

They don’t allow you to play football like that anymore – a player cannot intimidate another player. We used to intimidate the referees! ‘I dare you to call it! I dare you to call a penalty on me!’ Lyle Alzado, I’ll never forget this. A referee said, ‘Alzado, I saw that.’ He had hit a guy, punched a guy. ‘I see that again I’m throwing you out of here.’ And he said, ‘You don’t have the balls to throw me outta here!’ And he didn’t get thrown out!

You can’t do that anymore. Now the league has changed completely. And I think it’s a better league because of these changes. And character plays a much more important role in the sport. And I think those are good changes.

At the conclusion of the 1983 season, you and the Raiders won the Super Bowl. Was that the high point of your career; having an interception in that game and winning? Did it feel like the culmination or was it something else?

Mike Haynes: It was the high point of my career – I didn’t know it at the time, unfortunately. Only when I look back, and even getting the interception, only in retrospect did I realize how big that was. At that time it was a big game in my life and I thought I would play in several more Super Bowls because that is what motivated me to work so hard in the offseason. But it was one of the best things and greatest experiences I’ve ever had.

Why hasn’t your coach Tom Flores gotten the recognition he deserves as a two-time Super Bowl champ?

Mike Haynes: I really don’t know the answer. I do a radio show with the Hall of Fame on Sirius Radio and we talk about why Tom isn’t in. There’s no real justification. He had a Hall of Fame career.

And as we started off this segment talking about changes and how the game has changed, sometimes we’re not comparing apples to apples. He won two Super Bowls, John Madden only won one. Shouldn’t he go in because of that? Well, there might be other things that I am not aware of, the fans aren’t aware of, so we may not know for sure. Maybe the Madden video game had something to do with him going into the hall because of his contribution to the sport. We just never know. But I’d love to see Tom Flores in.

3 thoughts on “Mike Haynes Interview: “We Used To Intimidate The Referees””