…this is how it ends. This is also how it begins..

We watch the NFL because it gives us something we lack. If you’re a lonely 49ers fan in St. Paul, MN for business and you go to watch a Vikings/Bears game late in the season and you want to see the Bears lose so that the Niners get home field

in the playoffs, you will find your fill of kindred spirits as you raise glasses in honor of the hope for a Chicago loss.

Comparatively, if a socially butterflied Chicagoan who looks like George Wednt, goes into a Sasaluito tavern, orders a round for the house and when asked what the celebration is for, the Chicagoan farts out his brauthole, “a Bears Super Bowl victory,” he will be satisfied that he pulled a nice little bait-and-switch-come-wool-over-the eyes of a bunch of smelly, unemployed hippies.

If a Yankee fan sees that the Sox are losing to Baltimore 10-0 in the 3rd, the Yankee fan will enjoy a blast of a hatred dopamine that compares to a bath salt haze.

If a Cavalier fan (all 13 of you) sees Lebron holding his knee in Game 2 of the 2013 Finals, that Cav fan will go a premature  one in his Under Amour shorts.

These tactics/thoughts/transitions of psychic thought are the very cornerstone of hating/loving people simply based on a personal preference. It’s tribalism at it’s best. Divide, then conquer.

“Our heroes may make us love them, but it is our villains that make us cheer.”

I tend to think that I don’t enjoy sports I way I used to. In fact, I know I don’t.

Back in 1998, I didn’t care that Randy Moss was an idiot and that Brett Favre had a penis. All I wanted was to see Moss get that jump ball or Favre “have fun out there.”

The term “soap opera” has become synonymous with today’s Twitteroided National Football League. Why? Because we care more.  When  we get to know a Calvin Johnson or a Drew Brees or a RG3—we like them more.

This is a fundamental rule in any good fiction, if you don’t like Don Draper or Rorschach, then you have no story. The same goes with a villain, we must love to hate Anton Chigurh or Bob Costas.

Some may think that this soap opera element in sports is a lowering-of-the-standard. It may be. But just a wee bit. It’s mirroring the WWF of the 1980’s. It’s a male tabloid. It’s a hunking behemoth that has no rival. The NFL is like a B track from News of the World.

We will look back at the 2021 season circle of parity as the beginning of the NFL Singularity/Parity matrix of now.

But when did the NFL Circle of Parity 2021 begin?

We will look back at the 2011 season at the beginning of the NFL Singularity/Parity.

The year when they figured out to stay relevant in the off-season with Andrew Luck vs. RGIII in the draft and the Saints Bounty/Sean Payton’s martyrdom. The year when a Super Bowl rematch between the Giants and Patriots was eclipsed by something as stupid as Tebowmania.

And now 2012. The first season of post-NFL parity/singularity– (“the year the machine awoke” would be the subtitle if this were a Hollywood blockbuster).

Leonardo DiCaprio would play Tom Brady. Denzel and Will Smith as Ray Lewis and Ed Reed.

Brad Pitt as Brett Favre, who returns to the game for the Buffalo Bills only to go 1-6 after acquiring America’s Top Penis Model, taking over for out-for-the-year Ryan Fitzpatrick, to be played by my future brother-in-law.

This entry has no real thesis, so here are some unorthodox decisions (AKA Predictions) for 2012 – how’d we do?:

Surprise Team: Ryan Tannehill and the Miami Dolphins. (9-7, loses to the Bengals in the Wild Card)

Devastating Injury in Week 1: Drew Brees. Broken throwing hand. Out 12 weeks. The Saints go marching to 5-11 in his absence.

Will the Bears take it to the house? The house burns… 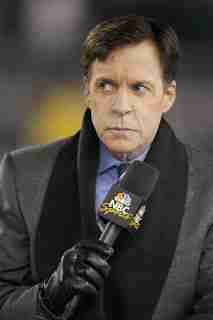 I will end you if you!