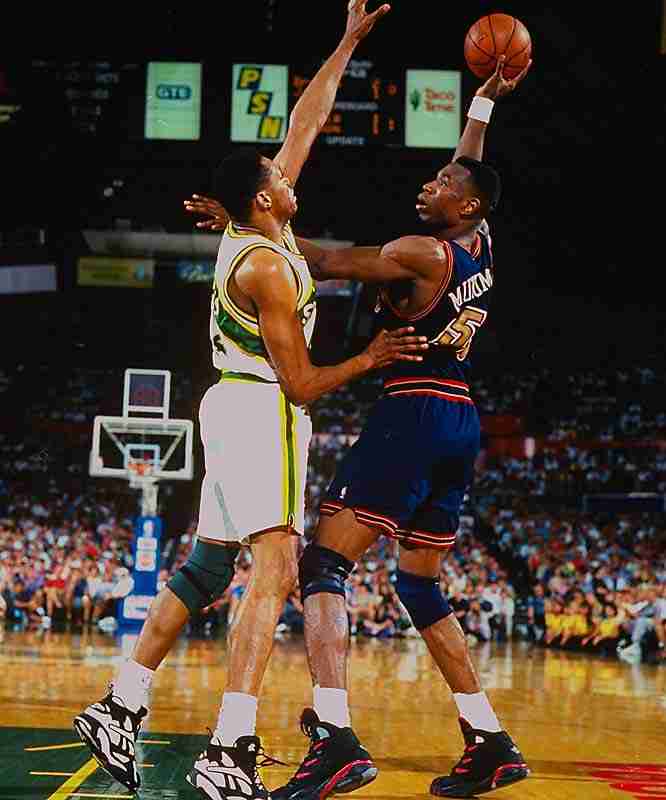 The year was 1994. Charles Barkley signature “Air Max” basketball shoes, selling for $150 a pair, were king. The world was shocked by the unexpected death of Kurt Cobain. And the greatest NBA playoff upset ever took place.

And Seattle Supersonics fans the world over were reeling from a first round playoff loss to the eighth seed Denver Nuggets.

The Sonics had blown through the regular season going 63-19 which was a franchise record for wins and were the number one seed heading into the first round of the Western Conference Playoffs to face a Denver Nuggets team that no one had expected anything from.

And with good reason; to that point in NBA history no eighth seed had ever beaten a number one seed. And no one expected a 42-40 Denver team to pose a legitimate threat, especially after losing the first two games in what was at the time a best of five game first round series.

On paper it looked like no team, especially not the Nuggets, had a prayer to hang with the Sonics who were easily the favorites out of the West and owned both the best home and road records in the NBA.

The Sonics were like a team of cartoon characters and the matchup with Denver in the first round lent itself to the same end as a comic book where the stud always wins in the end.

Denver on the other hand lacked a big time stud, consisting instead of a nine player deep rotation and was the youngest team in the league.

Dikembe Mutombo was in his third year and was really the closest thing they had, coming off his first of three consecutive years where he would lead the league in blocks.

Mahmoud Abdul-Rauf and LaPhonso Ellis were the two leading scorers, but for a team that ranked 19th out of 27 NBA teams that year in scoring, nothing was expected of them, especially after the first two games of the series were won by the Sonics, 106-82 and 97-87.

But the Nuggets came out and won game three on their home court 110-93 and followed that up with an improbable game four 94-85 win in overtime.

That set up game five in Seattle to determine who would move on and face the Utah Jazz in the semifinals.

In what was an epic back and forth game where the intensity never waned and every possession felt like the most important in the game, Kendall Gill’s layup with a half second left on the clock sent the game into overtime.

But the Nuggets maintained the momentum throughout the extra frame and escaped with a 98-94 victory.

Immediately the image of Dikembe Mutombo clutching the basketball over his head as he laid on the floor and time expired became synonymous with any sports themed “David vs. Goliath” scenario ever since.

The Nuggets would go on to lose in a seven game series to the Jazz that was equally intense thanks to the Nuggets digging a hole by losing the first three games of the series, then winning the next three, only to lose in game seven.

The Sonics on the other hand would average 60 wins a year over the next four years, culminating with a Finals loss to the Bulls in 1995-96.

But in those four years the Sonics only advanced past the Western Conference Semifinals one time, which was the loss to the Bulls, and are forever remembered as a team that couldn’t live up to its talent level.

The Nuggets upset of the Sonics is a great reminder of how the minute the NBA’s “real season” begins, the regular season results are completely meaningless.

2 thoughts on “The Greatest NBA Playoff Upset Ever”