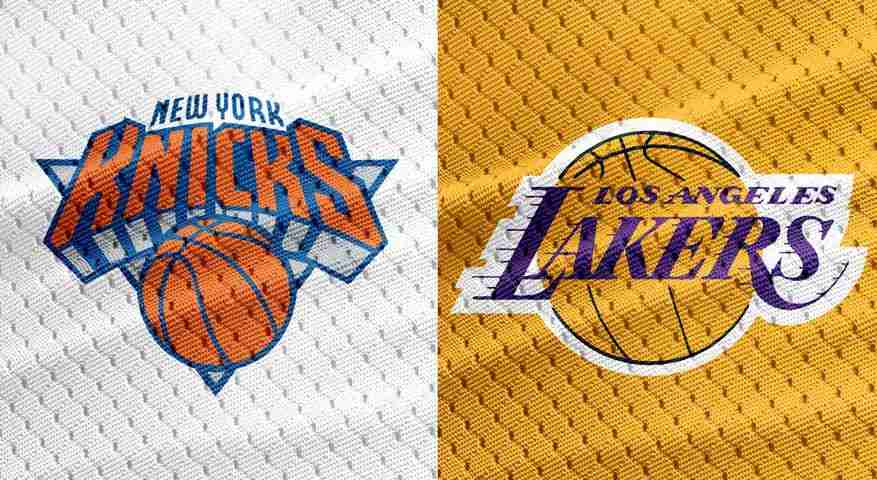 The NBA season really doesn’t begin until Christmas Day. But what you may not know is that the tradition of the NBA Christmas day schedule started all the way back in 1947.

With the creation of TV and the accessibility to these games, the NBA decided to schedule games on Christmas that showcased the best teams and players.

The Knicks have played more Christmas Day games than any other team, with 53 total. They are 22–31 Christmas which is the most losses of any NBA franchise, and second most wins.

Surprisingly, the Sacramento Kings have the 3rd most wins on Christmas day – 18 – even though they have not played since 2003!

Love him or hate him, Kobe Bryant made as significant impact to Christmas Day games as any player in history. Bryant played 16 games on Christmas, the most of any player. Dolph Schayes, Shaquille O’Neal, and Earl Monroe each played in 13.

“The Big O” Oscar Robertson WAS the all-time leading Christmas Day scorer with a total of 377 points in 12 games. Until Kobe passed him with 395 in 16 games. 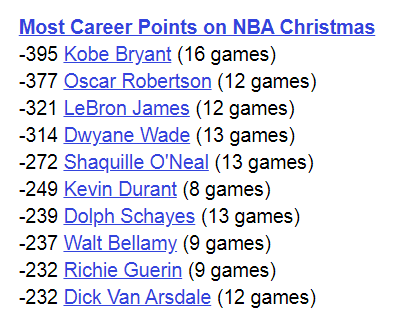 But for all-time NBA Christmas Day points per game, T-Mac reigns supreme (can we all take a collective moment to remember how great a scorer he was?): 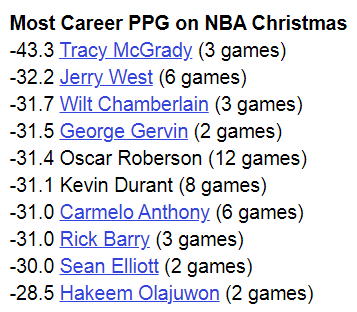 Like King’s 60 point game, there have been some other memorable performances on Christmas Day. Like Rick Barry’s 50 point game in 1966.

In 1972, Tiny Archibald set a Christmas Day record with 18 assists. That same year he would be the first player to ever lead the NBA in scoring and assists in the same season.

26 years ago Dominique Wilkins had 45 points, nine rebounds and three assists in a 106-100 Hawks victory over the 76ers.

As the popularity of the NBA has grown, so has the interest worldwide. This year’s NBA Christmas games will be broadcast in 215 countries in 47 languages and will feature 23 players from 16 countries.

Merry Christmas to everyone! Hopefully Santa doesn’t fill your stockings with coal, homeboy!

In the spirit of that, here’s a classic Christmas joint from Run-DMC that I’m sure we will hear during the games this year and, hopefully, for the rest of our lives: