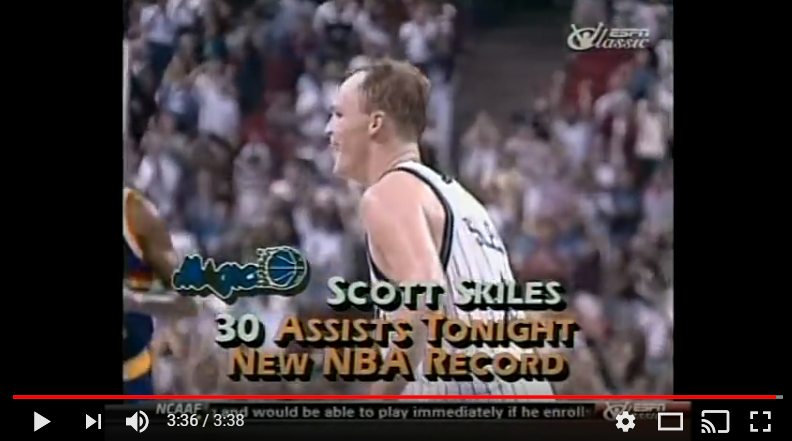 Though it’s hard to imagine as Bucks/Bulls/Suns head coach, Scott Skiles was a legit baller at one time. This is a record that may never be broken.

28 years ago on a warm night in Orlando, Magic point guard Scott Skiles set the single game NBA assist record with 30 during a 155-116 victory over the Denver Nuggets.

Going into the game, there was no reason for anyone to expect any type of legendary performance as both teams were struggling. The Nuggets were 6-22, the Magic 6-23, two of the worst records in the league.

Skiles to that point in his career hadn’t been given the opportunity to do much. Drafted by Indiana, he came off the bench for two years. The Pacers thought so little of him that they left him unprotected for the 1989-90 NBA expansion draft where he was selected by the Magic. 1990-91 was his first season as a full-time starter and he responded with a great season, ultimately winning the NBA’s Most Improved Player Award.

But what caught everyone’s eye was his 30 assist game, breaking the previous record of 29 held by Kevin Porter of the New Jersey Nets in 1978. And it wasn’t like Skiles was just a facilitator in that game, sandbagging on offense just to set the record. He scored 22 points on seven of 13 shooting. He turned the ball over just four times, on his way to 7.5 to 1 assist to turnover ratio. Check out the final assist, not exactly a gimme:

Skiles didn’t just flounder after the 30 assist game- he had several outstanding assist performances that year including a 20 assist game against Denver roughly three months later. For the season he dished out 15+ in six games on his way to averaging  8.4 assists per game which was 10th in the league.

There is always something magical about seeing a record setting performance, particularly one that was completely unexpected.

Will Scott Skiles 30 assist record ever be broken?

Top Five Most Efficient NBA/ABA Players In History: Saved By The...