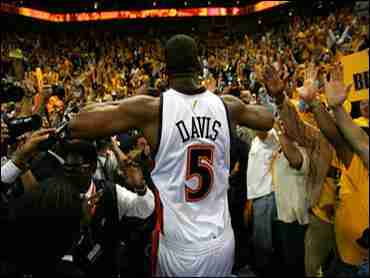 This is the third greatest NBA playoff upset ever because it was the third time in history an eighth seed had ever beat a one seed.

And though it was dramatic and unexpected, it just wasn’t on par with the first two.

At the time, the Dallas Mavericks were considered one of the biggest favorite one seeds ever, coming off of a 67-15 regular season record which was the only since legitimate claim to challenge the Bulls 72-10 all-time best NBA season.

The Mavericks were also coming off of losing in the Finals to the Heat the previous season, a series many people felt like they should’ve won; expectations were high and facing Golden State in the first round they had every reason to be.

The Warriors were a franchise at the time that was mired in mediocrity with no real reason to be optimistic.

After squeaking into the playoffs at 42-40, they were a complete after-thought.

The Warriors qualified for the playoffs that year for the first time since 1994 with the 13 year drought between appearances being the second longest in NBA history.

And even though fans were excited, it meant they’d have to match up against the buzz saw that was the Dallas Mavericks.

The Mavs roster was basically the same roster of guys who have seemingly been on the team forever.

Lead by Dirk (who was that season’s MVP), Jason Terry, Josh Howard, a young Devin Harris and buoyed by sixth man Jerry Stackhouse’s last productive season in the league.

Dallas was ninth in scoring but fourth in defense during the year holding opponents to just 89 points per game.

Even though the Warriors were devoid of a ton of offensive weapons they averaged 105 ppg in the six game series, something that was not expected against the Mavericks defense.

Another thing that wasn’t expected was the play of Baron Davis who went off and played like a man possessed despite a strained hamstring, literally playing at a different speed than anyone else throughout the series.

Even though this link occurred in the next series versus the Jazz, it gives you an idea of the level he was playing at.

Another point worth remembering was the impact the Warriors’ fans had; they were totally raucous and had a lot to do with the outcome of the series.

It’s one of the few series I remember watching where you could almost see the energy of the crowd descend upon the opposing team and have a literal impact.

When Golden State won game one in Dallas by 12 points, suddenly everyone remembered how the previous season ended and wondered if Dallas was even that good.

The Mavs fought back and won game two by 13 points, lost game three by 18, lost game four by four and then won a tough game five by six points.

Game six was a game the Mavericks had to win and they were out of it from the beginning losing the game 111 to 86.

Dirk played horribly and caught a lot of the blame, especially after a putrid game six performance (2-13, 8 points) considering he was the MVP, but Avery Johnson would ultimately be found to be at fault, and was fired the next season following a second consecutive first round exit.

For the Warriors, beating Dallas was their first playoff series victory since 1991 over Triple J Ranch and the days of “Run TMC”.

The following season Golden State actually went 48-34, winning six more games, but failed to make the playoffs. And it’s been all downhill ever since.