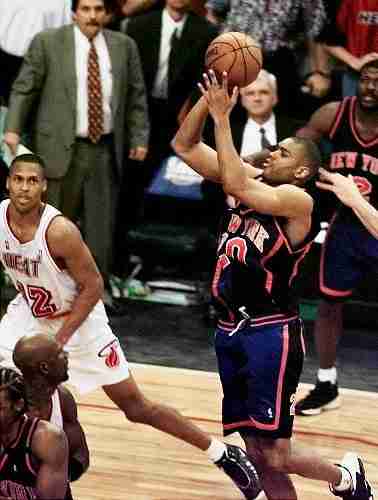 I wrote about the greatest playoff upset in NBA history here. But a close second would have to be the New York Knicks upset of the Miami Heat in 1998-99.

The Pat Riley led Heat were the number one seed after posting a 33-17 record during the strike shortened season and the Knicks stumbled to 27-23, barely qualifying as the eighth seed.

But New York would ride the momentum of beating the Heat all the way to the NBA Finals, becoming the first eighth seed to ever advance that far.

What was fun about this series was the pure physicality.

Both teams were prototypically rugged Eastern Conference teams, grinding out offensive possessions to focus on defense, and their rosters were almost a mirror image of each other, thanks to Riley leaving the Knicks just four seasons earlier to coach the Heat so the rosters were perfectly matched.

What really sums it up is offensive average for both teams; The Knicks averaged 83 ppg while the Heat averaged 79 ppg- it was old school playoff basketball.

Both had flashy offensive weapons that could make plays, Tim Hardaway for the Heat and a still dominant Latrell Sprewell.

Both had more physical weapons like the Knicks Larry Johnson and Kurt Thomas, the Heat had Jamal Mashburn and PJ Brown.

Both teams also featured a litany of veteran ballers on the decline of their careers hoping to hang on for one more year and win a ring in spot duty.

On paper it was a great match-up and fortunately for the fans it played out that way in gritty realness, like a heavyweight fight which each combatant stealing rounds.

From game one on each team alternated victories and the series was subject to wild swings of momentum, such as the Knicks 32-2 run in game three to the Heat’s 15 point margin of victory in game four.

Until the deciding game five in Miami there really wasn’t a lot of drama at the end to decide games with the victor in the first four winning by an average of over 17 points per game.

But game five was like the first four games rolled into one, the “win or die” scenario combined with players actually playing as if that scenario were being enforced.

All the aggression and turmoil set the stage for one of the most dramatic shots and victories in NBA history.

Down by one with 19.9 seconds left the Knicks did everything they could to screw up the possession and struggled to get a shot off.

Ultimately after an inbounds with 4.4 seconds, Allan Houston launched a running floater from the top of the lane that bounced off the rim and backboard before falling through the hoop securing a one point victory and the series for the Knicks.

The Knicks would lose to the Spurs in the Finals 4-1, but would make the Eastern Conference Finals and the first round of the playoffs the following year prior to being eliminated.

From there, the franchise would make the playoffs once (2003-04) in nine years, finally qualifying again this year.

The Heat would make the Eastern Conference Semis the next year only to lose to the Knicks again, this time in a seven game series and then also get eliminated in the first round the following year.

Riley would secure a championship for the Heat in 2005-06.