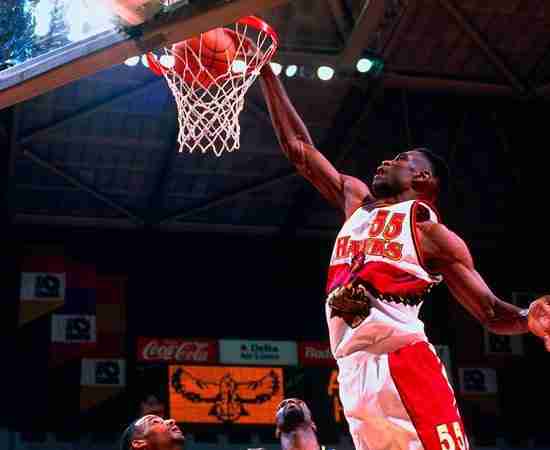 20 years ago today, Dikembe Mutombo made history. Mutombo is the greatest defensive player of his era and we spoke with him.

Atlanta’s Dikembe Mutombo was named the winner of the 1997-98 NBA Defensive Player of the Year Award, becoming the first player in NBA history to win the award three times. But “Mount Mutombo” wasn’t done there. Three years later, he would win the award again for the fourth time in his career.

I was lucky enough to interview Dikembe and he shoved the mic right back in my face like. Here are a few excerpts.

HV: How did the finger wave come to become your signature move?

DM: It happened after my third year just before we beat the Seattle Supersonics in 1994 NBA playoffs. I was having such a great year and blocking shots and moving up in the league. I used to block the shot and then I would shake my hand and no one said nothing. One day I decided shaking the hand doesn’t really mean nothing- maybe the best way to not come into the House of Mutombo it’s best to wave my finger, so it worked out very cool. But it ended up getting me a lot of technicals.

HV: How did the NBA come to ban that? Does David Stern call you personally?

HV: Who was your favorite NBA player to block?

DM: That’s a good question. To me, not just one in particular. But I think playing against Shawn Kemp. He was such a high jumping, athletic player.

HV: How gratifying was it to be the first eight seed to beat a one seed when your Nuggets beat Kemp’s Sonics?

DM: One of my proudest successes of my career.