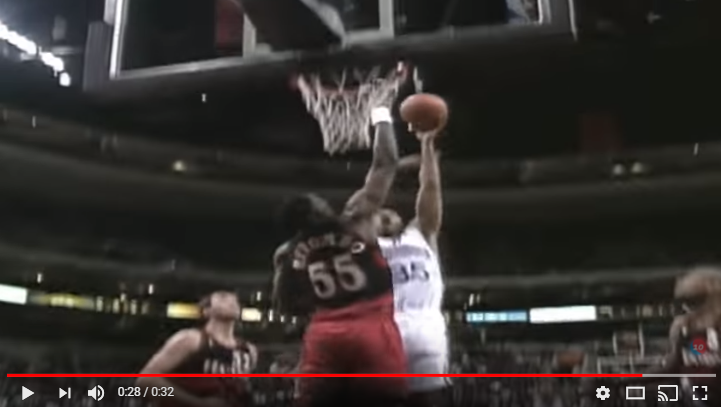 According to Mayan prophecy, the world is set to expire on December 21, 2012. With only 4 1/2 weeks (and counting) to the end of the world, Old Spice has recruited arguably the best defender of all-time – NBA legend and global ambassador Dikembe Mutombo and his finger wag – to save the planet from its impending peril!

During his 18-year playing career, “Mt. Mutombo” was one of the most intimidating shot blockers and rebounders of all time, leading the league in blocked shots five times and rebounds four times. Mutombo was an eight time All-Star and appeared in the NBA Finals with the Philadelphia 76ers.

Tell us about the game. According to the site you have 4 1/2 weeks to save the world before the end of the Mayan calendar, correct?

Dikembe Mutombo: I team up with Old Spice to promote the computer game and we have to save the world in 4 1/2 weeks. Also to promote Champion scent from Old Spice. It’s a wonderful game for everybody to play.

The concept is you’re going to defeat your rivals and save the world. Is there any way you could save everyone on Earth except for my ex-wife?

DM: (Laughing) We have to save the entire world. We’re going to save the world because the Mayan calendar says it will end in four and a half weeks. And we’re going to do our best to stay alive.

If you could just reject her head to like the 10th row, I’d really appreciate it. Just like you’re blocking Shaq.

DM: (Laughing) You’re funny man. It’s like blocking a shot and if I could, I’d send it all the way to the 10th row, no problem.

Let’s talk about Georgetown. You played there with Alonzo Mourning and a lot of other great players. Why couldn’t you and Zo win a national title?

DM: Man, that is a major question that will haunt us for the rest of our lives. We had a chance and ultimately went to the NBA to become dominant centers and we had opportunities to win in college. The opportunity was there, and we just didn’t do it.

This may not be a basketball question, but it’s become an internet meme, and we’ve got to ask you about “Who wants to sex Mutombo?” story.

DM: That story is not true. I don’t know who came up with that story. Nobody ever said who was there at the party with me, who was out with me. First of all, when I came to Georgetown in the Big East, I didn’t know English. So why would my mind come across like that? Plus, playing for Coach Thompson, one of the most disciplined coaches in college, he was very strict and knew where we were every night. Somebody asked me about it once and I said it was a made-up story. When you’re awesome, beautiful, tall, whatever, people will try to make up stories about you.

How did the finger wag come to be your signature move?

Dikembe Mutombo: It happened after my 3rd year, just before we beat the Seattle Supersonics in the 1994 NBA playoffs. I was having such a great year and blocking shots and I was moving up in the league. I used to block the shot and then I would shake my hand and no one said nothing. One day, I decided shaking the hand doesn’t really mean nothing, maybe the best way not to come into the House of Mutombo is to wave my finger, so it worked out very cool. But it ended up getting me a lot of technicals.

Why did the NBA ban the Mutombo finger wag? Did David Stern call you personally?

Was there anybody you loved to do it to where it was worth losing a couple thousand bucks?

DM: There were a lot of players who did it to me. Yes, a few players who had a chance to dunk on me. Like Michael Jordan in the playoffs, he had a big dunk and waved his finger at me. But he got a technical foul.

Who was your favorite NBA player to block?

DM: That’s a good question. To me, not just one particular player. But I think playing against Shawn Kemp… he was such a high jumping, athletic player.

DM: (Laughing) Come on man! I don’t know what new Shawn Kemp looks like now, because I haven’t seen him in a while, but old Shawn Kemp!

How gratifying was it to be the first eight-seed to beat a one-seed when your Nuggets beat Kemp’s Sonics in 1994?

DM: One of my proudest successes of my career. But I’m happy to promote the Old Spice game now. I want everyone to go to the website and play the game to save the world. We only have four and a half weeks, so we better do it.

Play the game “Dikembe Mutombo’s 4 1/2 Weeks to Save the World”. ANd read these articles after your attempt to save the world ends in utter failure:

2 thoughts on “Dikembe Mutombo Finger Wag; Where Did It Come From? I Asked Mt. Mutombo”