Well, yes he was. But not as fat as in-studio TNT host Charles Barkley. But even in his playing days, I always thought he looked great. More in-shape than anyone I knew. And he could definitely whip your ass.

Look at this Charles Barkley 1989-1990 NBA Hoops card and tell me different: 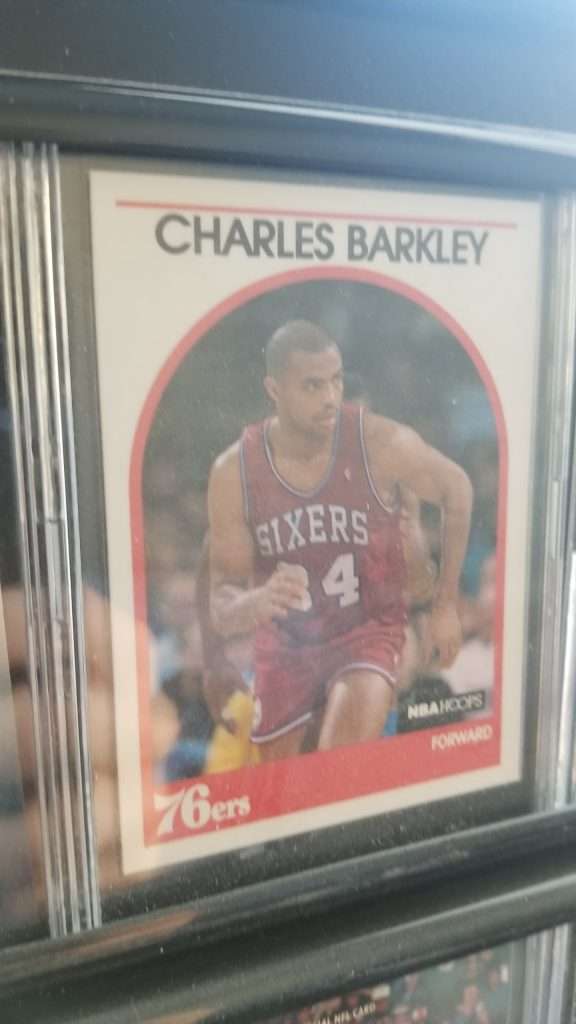 Sadly, the title of this article/quote is not fiction; my own daughter asked me this while watching the NCAA tournament a couple years back.

And while she was only 5-years-old at the time, I couldn’t help but think of all the people watching who only know Sir Charles aka Charles Barkley as a television mouthpiece. And it made me sad.

There’s literally an entire generation watching him now who have no idea what a beast the “Round Mound of Rebound” was for almost 20 years.

Sure, he’s put on some weight but so have us now old dudes who watched him dominate when were young.

Now, the kids are like “Who is that fat dude and why does he get away with the things he says?” Because junior, there has never been a player like “Chuck” before he arrived in the NBA, or ever since.

Perhaps like no other player, Barkley used the sheer force of his will to make things happen. Listed at 6-6, he was closer to 6-4, but played like he was at least 6-10.

And even though he wasn’t the biggest dude on paper, watching him he seemed like he was twice the size of anyone on the court, his aggressive demeanor and attitude literally changing games.

What’s interesting about Barkley is that he has been defined by his weight since he played in college at Auburn and even now as an announcer.
And though it made him a magnet for criticism and drew the ire of opposing fans, it never stopped him from producing.

As essentially a 6-4 inch center, “Sir Charles” led the SEC in rebounding in each of his three years, shot 68% from the and averaged just under 15 ppg in college.

His insane vertical leaping ability allowed him to average almost two blocks per game and play above the rim in an aggressive, almost animalistic way that people immediately loved and identified with or hated instantly.

Barkley was drafted by the Sixers in the 1984 NBA Draft two spots behind Michael Jordan and three behind Sam Bowie (lol, Portland).

In eight years in Philadelphia, “The Chuckster” averaged 23 ppg and almost 12 rebounds per game and became not only one of the best players in the league but easily the most quotable, hence his current role as a commentator.

Barkley demanded a trade in 1992 and was dealt to the Phoenix Suns where he put up 25.6 ppg, 12.1 rpg and a crazy 5.1 apg putting together his most complete season as a pro and wining the MVP award.

The addition of Barkley made the Suns the highest scoring team in the league and one of the best, making the NBA Finals before losing to the Chicago Bulls in six games.

The “Chuck Wagon” averaged 22 ppg over the next three years in Phoenix, but hurt his back, which compromised his leaping ability and became a different player.

But this is what I always appreciated about Barkley; post injury he developed one of the best mid-range jumpers in the game, and even hit the occasional three pointer to keep defenses honest.

At the time, and especially now in hindsight, he never got the credit he deserved as a multi-faceted, all-around player.

Barkley spent his final four years in the NBA in Houston and while his scoring decreased, (16.8 ppg combined) he averaged double figure rebounds in each year, even in limited minutes.

So while you’re watching the NCAA tournament this weekend, do the world a favor and pull a youth in your company over to the computer, go to YouTube, search “Charles Barkley” and show them why he’s on TV in the first place.

Even when the youth in question says, “There’s no way that’s the same guy,” you will have done your part.