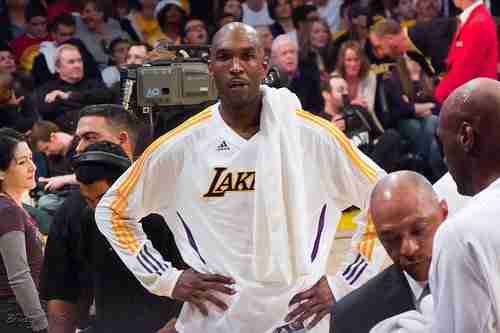 When Jerry Sloan retired last week it made me face a sad reality; that I am getting old. By him retiring, it’s like another link to being a kid watching the NBA is now gone.

As long as these guys continue to play, it means we’re not old. But now with no Sloan to turn to, who else should I be rooting for in the interest of keeping my youthful appearance?

In his first incarnation, Antonio McDyess was an athletic freak who was one of the most ferocious dunkers in the league. A knee injury in 2001-02 sidelined him for almost two full seasons and changed his entire style of play.

After being stripped of his athleticism and jumping ability, McDyess redefined his role in the league as a veteran who could rebound and hit the mid range jumper. Now playing for the Spurs in his 14th season, the argument could be made the injury actually prolonged his career.

Of all the members of the “Fab Five” recruiting class of 1991, Howard’s 16-year career is the longest by several years. Howard and the “Fab Five” made an indelible image in the world of hoops as the first team to rock baggy shorts, a trend that is now an NBA standard, but was a big deal at the time.

Howard has been around so long he played for Washington when they were still the Bullets and was the first NBA player to sign a $100 million dollar contract.

If the Heat can pull out a title in the 2011 NBA Finals, Howard would be the first and only Fab Fiver to collect a championship ring.

Sadly, if you Google “Fab Five” these days, you will find nearly as many links to a cheerleading scandal in Texas as to the greatest group of freshman ever assembled.

The year was 1995. Montell Jordan’s “This Is How We Do It” was king of the airwaves. The O.J. Simpson trial was in full swing.

And Kurt Thomas was the best college basketball player in the country, becoming one of three players (Xavier McDaniel and Hank Gathers) to lead NCAA Division I in rebounding and scoring in the same season.

Currently the second oldest NBA player at 38, Thomas became a more complete player as he got older and is now seen as a steady veteran with a penchant for defense who doesn’t make mistakes.

Yes, he is still playing. Even though he’s been a pro for 15 years it feels like 30. Maybe it’s because the joke “He’s just a regular Joe, get it!?” was old after it was first uttered, or the headline “No Ordinary Joe” was completely overused for nearly a decade before his production decreased.

Maybe it’s the scandal he was at the epicenter of when Kevin McHale tried to pay him under the table. If he were an NFL player, he would be Mark Brunell, continually doing just enough to keep getting picked up.

Erick Dampier was the biggest human I have ever seen in my life, other than Shaq.

And when he was drafted 10th overall in 1996, the expectations matched the physical frame; big. But as a pro his offensive game never developed beyond him being a space-eater as in 14 years he averaged a double-double only once.

Thought of now as a “defensive specialist” mainly because he is huge, Dampier is clinging to life on the Miami Heat bench, hoping to Brian Scalabrine his way to a cheap ring.

Though being declared clinically dead for a couple seasons, Hill is still productive. For a six year stretch from 1994 to 1999 Hill was the most productive player in the NBA and is still the only player other than Larry Bird to have season averages of 20+ ppg, 8+ rebounds and 7+ assists.

I still remember rocking Fila’s in 1994 due to Grant Hill’s endorsement deal with the company and just because of how cool everyone thought he was. And I still remember the dude that stole them…

So, what’s the word? Whose retirement made you feel old? If you said Jerry West it’s because you are old…