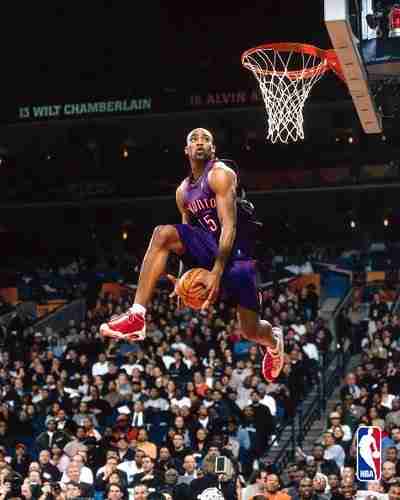 Read part one of this series here. In ranking these champions, I want to completely exclude their overall skill as basketball players, and focus solely on their ability to dunk the basketball. Also, I think era in which they were dunking in is very significant, as is height.

With those parameters laid out, let me throw the second five names at you, in no particular order. Of these five, I will rank them by reader comments via Hoopsvibe.com, Facebook and private emails. The player who gets the most vote moves into the “Final Four” of great dunkers, from which a mythical champ will be crowned; open wide, here they come!!

– Vince Carter- 2000 Champion
For anyone who didn’t watch this entire contest from start to finish, you are only hurting yourself. VC’s performance was no doubt elevated by Tracy McGrady and Steve Francis. Everybody knew VC was the best leaper and “in game” dunker in the NBA at the time, but that doesn’t always translate to Dunk Contest success. After two years of no Dunk Contests, VC’s performance is exactly what the NBA needed.

Before the contest VC stated he had four dunks he was going to do that no one had ever done- and he wasn’t lying.  His reverse 360 windmill to start it set the tone. His between the legs off the bounce pass “East Bay Funk Dunk” blew people’s minds. Hanging on the rim with his elbow, then finishing with a two handed dunk from near the free throw line wrapped up the title. Kenny Smith said it best when he said, “Carter is like a combination of Dominique Wilkins and Michael Jordan.” True that.

– Harold Miner- 1993, 1995 Champion
“Baby Jordan” sure looked the part, due to his mannerisms and style, but as a dunker, he was limited. In 1993 Miner’s dunking was defined by his power, including the indelible image of his two handed reverse dunk. In 1995, it was really interesting to that he won again because he used almost the exact same repertoire of dunks. But the field performed so badly (Antonio Harvey, Tony Dumas, Isaiah Rider) he was sort of the default champ. Another factor was the change to a timed series of dunks, rather than one at a time like in past years.
– Spud Webb- 1986 Champion
Spud will always be the “People’s Champion” of the Dunk Contest. At 5-6, going up against the most fearsome dunker in his era in Dominique Wilkins, it is still the ultimate “David vs. Goliath” story. And it just looked so surreal to see this little guy jumping so freakishly high. Before the Dunk Contest two years ago TNT ran a piece that compared Nate Robinson to Webb- in my mind, there is no comparison whatsoever.
– Kobe Bryant- 1997 Champion
Historically, the 1997 contest isn’t that highly revered. And even watching it, it really wasn’t great.Personally I blame Bob Sura who looked like he could barely even touch rim that day, but the field as a whole was just sort of disjointed. A young Kobe Bryant capitalized and was by far the most athletic and entertaining dunker in the field.
– Dee Brown- 1991 Champion
This was always one of my favorite Dunk Contests. It was early enough where you didn’t see the same played out dunks as always. Seeing a 6-1 inch Dee Brown elevate and impress over a field of significantly larger men was very compelling. And even though the “No Look Dunk” sealed the deal for him, he had several other very impressive dunks that everyone forgets about. But what this Dunk Contest is even known for more than that was Brown’s endless hyping of his Reebok Pumps, especially right before the final dunk where he “Pumped Up” his shoes and a new marketing campaign was borne; if 6-1 inch Brown can do it, why can’t YOU??

NBA Players By College: What College Has The Most NBA Players?