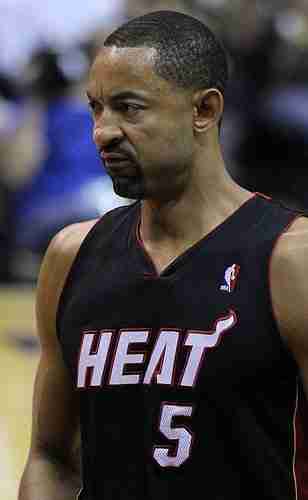 Whoever you’re rooting for, no matter who wins the 2011 NBA Finals, some old dudes are going to get rings. But do the old dudes in question deserve the ring?

Juwan Howard– If Howard gets a ring, he’d be the first and only member of Michigan’s “Fab Five” to secure one. Early in his career, Howard was as productive as any player on this list. Plus, he was usually the only good player on bad Washington Bullets and Denver Nuggets teams.
Verdict: I’m cool with him getting one.

Erick Dampier– Dampier should have been a much better pro player offensively, but instead became known as a defensive stopper above all else. But other than being big, was he ever that good? I do think it’s funny that he left Dallas to pursue a ring, and now he faces the Mavs in the finals.
Verdict: No, I’m not cool with it.

Mike Bibby– Bibby was the leader and catalyst for some very solid Kings teams earlier in the decade that could never beat the Lakers in the playoffs, including an epic seven game Western Conference Final in 2001-02. At his prime, he was one of the best PG’s in the league.
Verdict: I’m cool with him getting one.

Mike Miller- Mike Miller is on this list because he’s been playing like he was old all season, until the last two games against the Bulls when he provided a spark. Miller is the player on this list I’m most conflicted about. He was a solid individual player early in his career (double figure ppg for 9 of 10 seasons) but he wasn’t great. Hmmm…
Verdict: Yes, but I’m pretty blasé about him. Doesn’t excite me like Bibby or Kidd getting one, but way better than Peja.

Zydrunus Ilgauskas– “Big Z”, huh? Correct me if I’m wrong but wasn’t he the first vet to join the Heat after the “Big Three” signed? I’ll give him credit for his enterprising ways at the very least. 7-3, and he can barely dunk. Imagine if Spud Webb was 7-3; he’d be doing s$%# off the top of the backboard.
Verdict: I’m cool with him getting one.

Jason Kidd– Kidd totally deserves a ring; I think almost everyone is in agreement on that. If not, tell us why not in the “Comments” below. The increase in his effort, intensity and productivity from regular season to playoffs has keyed several victories.
Verdict: I’m cool with him getting one.

Dirk Nowitzki– Interesting point made during Game 5; of all current NBA superstars, Dirk has had the least to work with throughout his career and has basically carried the franchise until now. Ruminate on that. Additionally, Bird comparisons need to stop.
Verdict: I’m cool with him getting one.

Jason Terry– He gets overlooked at times, but when Terry gets on a hot streak he’s as good a pure scorer as there is. And I love that he’s rocked the high socks his entire career, not just when it was cool; he made it cool. Then Kerry Kittles developed version 2.0.
Verdict: I’m cool with him getting one.

Shawn Marion– “The Matrix” deserves one for his freakish ways early in his career, and for being a fantasy stud for a solid five years at least. It’s too bad he toned down his three point shooting ways because his shot from downtown was so bizarre- and largely accurate.
Verdict: I’m cool with him getting one.

Peja Stojakovic– Yes, he was on those same Sacramento Kings teams as Mike Bibby, but I can’t support this. His game is too “European” for me. I just never thought he was that good. Barf.
Verdict: No, I don’t think he deserves it.

The 2011 NBA Finals is sort of like an old-timers game for ex-studs.