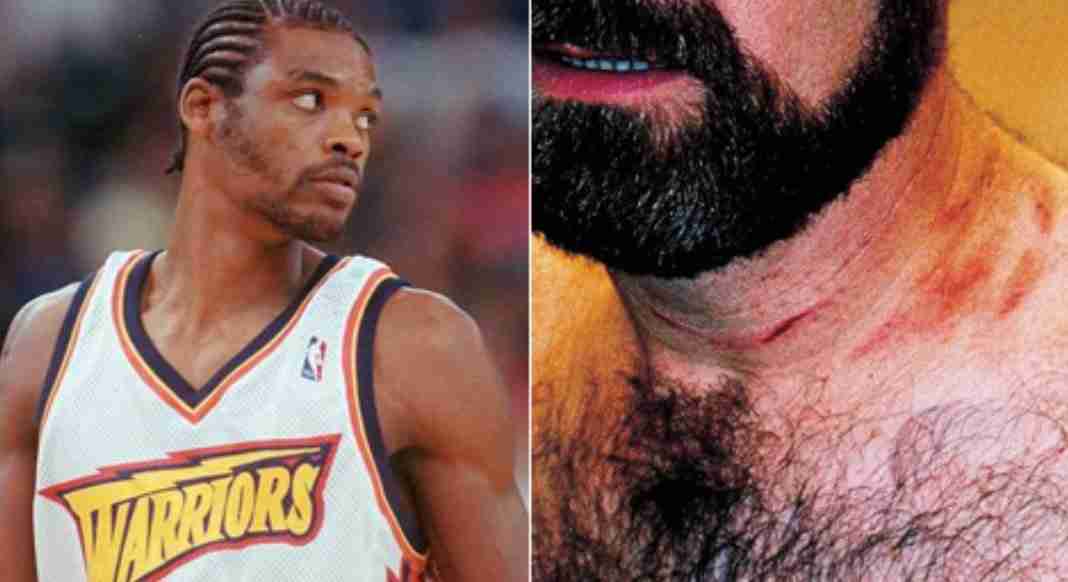 And in the ensuing 20+ years that followed who was the victor, ultimately?

Latrell Sprewell was at the height of his career when the incident took place. It was 14 games into the sixth season of his career. In the five years prior he had averaged 20.2 ppg and was coming off of a career high 24.2 ppg season.

He was a four-time all-star who had become one of the NBA’s premier scoring threats and was known for his athletic finishes and dunks.

Each dunk was fueled with so much anger to that point in his career, you’d look at the way he attacked the rim and think, “Dang, that dude is pissed. I wonder why?”

The incident started off harmlessly enough during a Warriors practice when Carlesimo asked Sprewell to practice a little harder and throw his passes a little crisper, specifically asking Spree to “Put a little mustard” on his passes.

Spree took offense and the rest is history; he allegedly attacked his coach, grabbed him by the throat and choked him from 10 to 15 seconds until teammates interceded. Spree came back 20 minutes later and tried to punch Carlesimo but failed to do any damage.

The Warriors responded by voiding the rest of his three year $23.7 million dollar contract and he ended up being suspended the remaining 68 games of the year. With the lockout beginning at the end of that season and the next season being shortened to just 50 games, Spree missed over a year of basketball.

Once he came back he was traded to the Knicks and he led them to the NBA Finals where they lost to the Spurs. He averaged 26.0 ppg during the Finals and was rewarded with a five year $62 million dollar contract.

But after battles with management (figuratively), Sprewell was traded to the Timberwolves where he played for two years and the team had the most success in franchise history.

After the Wolves wanted to re-sign him to a three year, $21 million dollar deal Sprewell famously turned down the offer because of insufficient funds and never played in the NBA again.

So what has Latrell Sprewell been up to since the incident? Wikipedia nails this one:

“Sprewell’s career came to a premature end in 2005 when he refused a $21-million three-year contract offer from the Timberwolves, which he said would not be enough to feed his children. Since that time, he has made headlines for grounding his million dollar yacht, having two of his homes foreclosed upon, and being prohibited from seeing his children.”

For Carlesimo, he kept his job for another two years before getting fired. Then he went into broadcasting for a couple years before joining Gregg Popovich’s staff as an assistant from 2002 to 2007. Then he got hired as Seattle’s head coach (leading them to a 20-62 record) then was fired after the move to OKC and a 1-12 start to the 08-09 season.

The thing about Carlesimo is that he was always known as a “screamer” in terms of his coaching style and had picked up a reputation for it, prior to and even after the choking incident:

The incident didn’t kill either person’s career, which is amazing. It was just sort of like two generally violent ships, passing in the night.

So, historically speaking, who won? Carlesimo is unemployed and has worked as a broadcaster, but did win three championships as an assistant coach for the San Antonio Spurs between 2003 and 2007.

Sprewell is presumably homeless. My heart wants to say Spree, but my brain thinks PJ.

Either way it was awesome drama. And even more awesome, neither guy changed or learned a “life lesson” or “quit drinking” or “made changes.”

In the words of Nirvana, it was “Very Ape”.