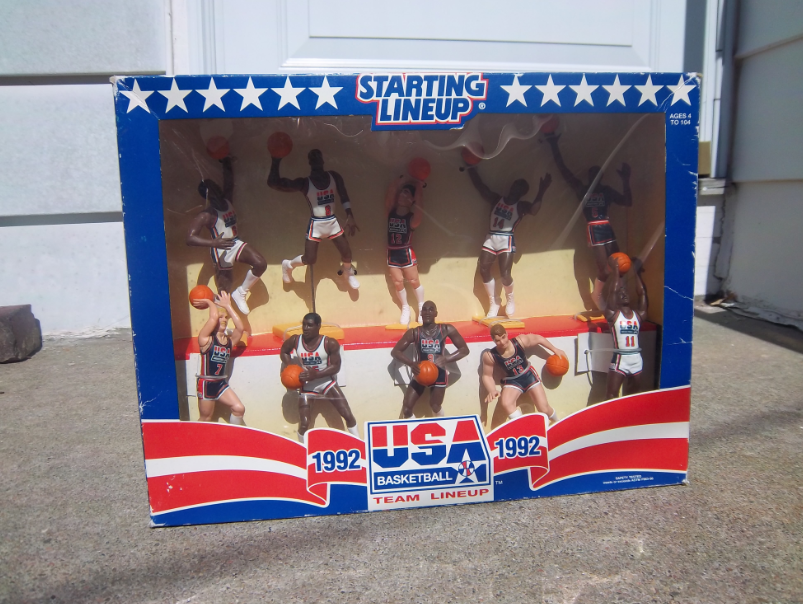 Can you believe it’s been 30+ years since the Dream Team dominated the 1992 Summer Olympics?

Perhaps more amazingly, can you believe that in all that time that I have maintained my 1992 USA Olympic Dream Team Starting Lineup set figurines in its original box, unopened and untouched by human hands?

It was the kind of gift you could only secure via guilt. It was the sort of reverse psychology that women have been employing on me ever since.

I remember one time in 8th grade during my 13th birthday party it was discovered by a party goer named Eric Hoffman who spent at least two hours prying me to open it.

It was the ultimate peer pressure situation, but I held firm. It turns out I should’ve probably opened it because since then it’s appreciated roughly $20 in nearly 20 years.

But every time I see that Dream Team Starting Lineup box full of the best NBA player figurines, I remember how special that team was.

Even though Clyde Drexler and Christian Laettner, as late additions, were not included in the set.

Did you know that Laettner was actually selected over Shaquille O’Neal for the final spot?

We all saw what Charles Barkley did to that Angolan; imagine what Shaq could’ve done.

FIBA agreed in 1989 to allow professionals to compete in the 1992 Summer Olympics in Barcelona and USA Basketball asked the NBA to supply the players. The rest is history.

Everyone remembers the dominance Team USA displayed in the Olympics, but what a lot of people forget is how overwhelming the team was during Olympic qualifying in the Tournament of the Americas held in Portland, Oregon.

Look at the scores from the six games, all “W’s” for Team USA:

The average margin of victory was 51.5 ppg. The Americans scored 121.1 points a game, while shooting an 63.0 percent from the field and a blistering 43.8 percent on three point shots.

Seven of the 12 USA players averaged in double figure scoring (even though no player averaged more than 22 minutes per game), led by Charles Barkley with 16.3 ppg. who was followed by Karl Malone with 14.8, Chris Mullin with 14.3 and Clyde Drexler with 13.8. Michael Jordan scored 12.7 ppg. and both Patrick Ewing and David Robinson notched 11.8 ppg. Barkley also led the team in rebounds with 6.7 rpg.

After the Dream Team smoked Cuba by 79 in the first game of the tourney, Cuban head coach Miguel Calderon Gomez had a quote that summed up the experience, “You can’t cover the sun with your finger.”

The Dream Team won the tournament and ultimately dominated the 1992 Summer Olympics in similar fashion.

The Dream Team beat their opponents in the Olympics that year by an average score of 44 points a game and looked so cool doing it.

Croatia won the Silver Medal and led by all that talent, ushered in a new era for the NBA where overseas players began to be viewed as valuable as their American counterparts.

Today you can look at almost every NBA roster and find a player from another country, but in 1992 it was extremely rare.

Michael Jordan was the only player to start all eight games which really speaks to how great he was.

Even surrounded by all those Alpha Males, there was no question who the top dog was.

Jordan took 30 more shots than anyone else, but Barkley was the leading scorer putting up 18 ppg.

Just in case anyone forgot, check out this roster; it would be akin to playing a game against the Hall of Fame as 10 of the players (minus Laettner and Mullin) are actually in the Hall of Fame.

Since the original Dream Team won Gold, the rest of the world gradually caught up and no other US Olympic team was even close to being as dominant.

In what can only be described as an affront to the supreme quality of the original (and only, in my mind) Dream Team is that each of the next two USA Olympic teams were also referred as the “Dream Team” though really, who are they fooling?
A team with Steve Smith on it should never be referred to as a “Dream Team”.
A more suitable moniker would be “Team of Guys Who Are Above Average NBA Players”.

The Dream Team wasn’t just the greatest team ever assembled for the way it dominated on the court, but it actually furthered the development of the sport for the entire world.

In 1992 the “Dream Team” was unleashed on the rest of the world.