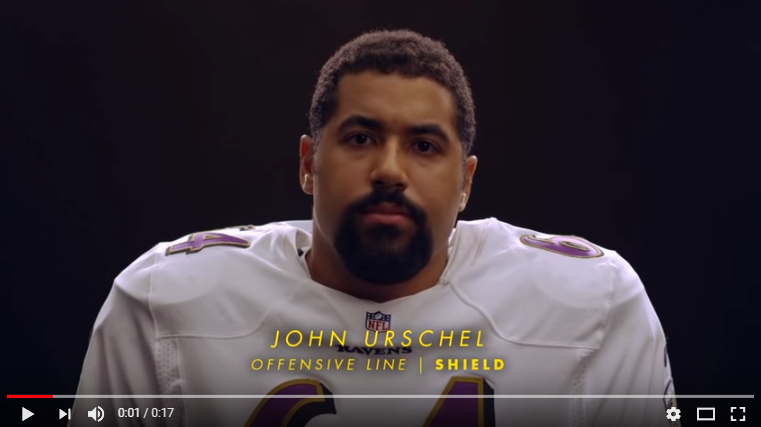 John Urschel is a statistical anomaly.

While offensive lineman have to possess a high football IQ just to make it to the NFL, the Canadian-born Urschel has a master’s degree in mathematics from Penn State.

He is pursuing a Ph.D. from MIT, and started two playoff games a rookie. What are the odds of that?

John Urschel teamed up with Gillette for the #ShieldMove campaign.

You don’t have to be a mathematician to calculate that If you don’t send a video in (like John’s below) via “the Twitter,” the probability of  John, Trent Williams, and Rodger Saffold selecting you as the contest’s winner is a cool zero percent, a stat we verified in the interview below.

Loved your sensual, yet non-sensual dance move. Was that from real life?

John Urschel: Oh, that’s a legit dance move – know that! I have moves. I took that one from the vault.

What’s the probability of success if you use that move on a hot babe on the dance floor?

John, would you refer to yourself as a “calculating” guy?

John Urschel: Yes, yes. I think I would.

Are you tired of people calling you the “Mathlete?”

John Urschel: If you want to dub me that, feel free to rock it. I’ll take it.

Do people actually call you that? Like, “Hey look, it’s the Mathlete!” In place of John?

It has happened on occasion. But I answer to both so it is OK.

What’s the most creative smack talk you’ve heard, a correlation if you will, comparing your skill at high-level math to your on-field, physical prowess?

John Urschel: OK, so I played college ball with this guy named Jared Odrick. He’s a defensive tackle/defensive end, he’s with the Jaguars now, used to be with the Dolphins. Not this past season but the season before, we were playing Miami. And I’m lined up on offense, and he’s lined up in his stance on defense, and he is asking me math questions. Like, “What’s 2 x 2?” Things like that to try to get me off my game.

Did they get progressively more difficult? Because even I could handle that one.

Yes, there was a spectrum, so he just tried to entice me with that. That’s where the true trickery came in.

Yeah, yeah. Those are tough (dry as the sun).

You wrote a paper called “A Cascadic Multigrid Algorithm for Computing the Fiedler Vector of Graph Laplacians.” What does that even mean?

I’ve been doing a lot of different math lately. But that one has a distant urkel method to compute this quantity which gives good approximation in non-clustering, of graphs. Amongst other things.

I bet! So how would you practically apply that; what would you use that in? What endeavor?

Are any of the Bengals even smart enough to talk trash to you about math?

John Urschel: You know, I like a lot of players on the Bengals. I’ve got a lot of respect for a lot of them.

Probability wise, what were the odds you’d make it to the NFL, and, become a starter in your first year after being a 5th round pick?

I mean, these things happen but not the highest probability. But I take pride in beating the odds.

What’s one thing that’s happened that you couldn’t have predicted about your NFL experience so far?

I could not have predicted that I would’ve started in a playoff game in my rookie year. That was pretty cool. Two playoff games, actually.

What’s the probability of aliens existing?

John Urschel: You mean, the probability of life on another planet?

I’m no expert but considering that on our planet there existed conditions that were conducive to life and given the large amount of planets, Id say that the probability plus the sample size, I’d say it isn’t out of the question.

To celebrate these unsung protectors of the gridiron, Gillette is finally giving them the chance to dance – literally – by showcasing their signature protection-inspired #ShieldMove dance. NFL O-Liners Rodger Saffold (St. Louis Rams), John Urschel (Baltimore Ravens), and Trent Williams (Washington Redskins) are inviting guys around the country to submit their very own dance on Twitter with the hashtag #ShieldMove all month long to receive some fun perks.