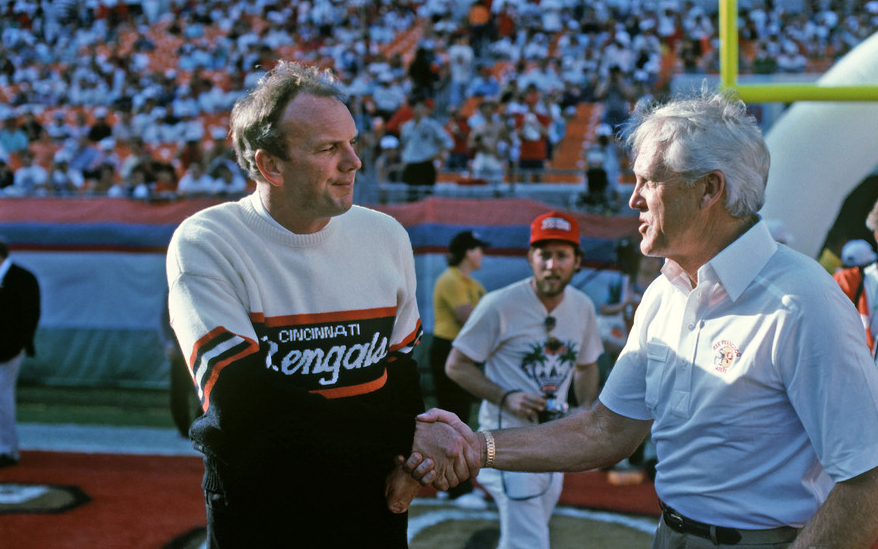 Few people in the history of the universe can lay claim to the amount of NFL experience and historical significance of Sam Wyche.

Whether as a quarterback playing for the Bengals and Redskins under legends Paul Brown and George Allen, or being the first assistant coach iconic NFL mind Bill Walsh ever hired, or being Joe Montana’s QB Coach for the first four years of his NFL career, Sam Wyche has had a hand in almost every significant occurrence in league history.

Like the “Six Degrees of Kevin Bacon”- except the NFL version.

So, pay your respects and if you don’t know who Sam Wyche is, read on and prepare to know more about the game you love, through the eyes of a man who has lived things you can only dream of.

Listen or read below:

Balls in the Air: I-80 Sports Blog Podcast · THE Sam Wyche Interview

In 1989 you handed the Oilers and then coach Jerry Glanville a 61-7 beat down where you continued to pass until the final minutes of a game even after the score was 30-0 at half time.

There are rumors as to why you kept your foot on the gas for so long, including that Glanville had run up the score in the previous meeting. What precipitated the beat down?

“I don’t think anybody ever ran up the score especially not in that game; they just didn’t stop us. The Central Division at the time was one of the most competitive divisions. It went for the entire eight years I was there and even with Forrest Gregg before me, that all the teams were up one year, then mediocre the next year, where no one team really dominated- before the Steelers got hot.

The eight years I was there we were 10-6 versus Noll and the Steelers. Anyway, we played the Oilers at home and beat them 40-something to 20 something. Then we go to Houston for the rematch and they win 40-something to 20-something, it was just like most of the time the home team won and won handily.

“The year before the 61-7 game Jerry Glanville made a comment in the local paper saying that had the Oilers caught a TD pass they dropped, that we would’ve quit. Well, you don’t tell a team they are quitters.

“Well, we were up 30-0 at halftime. Everything we did that day went right, and they couldn’t get anything going. Our starters scored on the first drive of the second half, and I took out all the starters. And we just scored another 20 something points.

The last part of the game we kicked a field goal to get to 61 to break the record for most points in Bengal history. And I thought, “Hey we’d come this far, why not set the record?” We really didn’t try to run the score up, it was just one of those days everything went right.”

When the 49ers drafted Joe Montana in the third round, how much faith did the coaching staff have in him? Did you know he’d be good immediately, or not until that second season when the team took off?

“Well, it wasn’t confirmed until the 2nd season but we knew we had someone that was different- he had the intangibles. Joe wasn’t a big guy, he didn’t have the big body, he was kind of thin, athletic type, more of a greyhound than anything else.

We got into practice and mini camps and it was apparent right away. Number one he had a very catchable pass-the ball traveled with the nose up, and it just arrived at the receiver.

He rarely had balls dropped because it came in so soft, not hard like most guys. The flight of the ball, with the nose up, gave it that cushion when it arrived.

“Also, Joe was one of the most patient QB’s ever because you went thru a progression in the offense we were running and developing then, which came to be known as the “West Coast Offense” which it wasn’t yet, in those days.

You went to your blitz receiver on the first step away from center, then you went to the number one WR if you didn’t get a blitz, then number two, then number three and your guarantee, your “save a sack WR” and just memorized “Blitz, 1, 2 ,3 guarantee. Blitz, 1 ,2,3, guarantee.”

You didn’t have to read coverage, or throw away from the safety; based on the design of the play someone should always be open. And if no one was open, you go thru the progression again to save the sack. But in your mind you knew, ‘I’m letting that ball go, I’m not going to get sacked and lose yardage.’ And that was the West Coast Offense.

Joe handled all that so fast. And I give Steve DeBerg a lot of credit for that because he worked with him a lot and was very unselfish, but Joe did a lot of little things that brought him along so fast.”

You are the man who created the “No Huddle Offense”; What led to its development?

Well, my first year I tried it a little at Indiana University. I was there just one year and Paul Brown hired me in Cincinnati. So, we were in Wilmington, Ohio at training camp. And I’d blow the whistle for “Nickel Period” and we’d run plays based on 3rd and 8, 3rd and 10, 3rd and 6.

When the defense would bring in the extra defender and take out the nose tackle or middle linebacker, it just hit me all the sudden- why in the world- everyone in the stadium knows were going to the ball on third and 8- why would we go back there and caucus for 20 seconds and let them bring in their better pass rusher and defensive back and take out a couple of guys that aren’t very good at pass defense?

So I said the next day to my offensive coaches that we were going to do the (No Huddle) and see how my defensive coordinator, who was Dick Lebeau in those years, responded. We’re going to move the ball and have a little scrimmage, but ion 3rd down I’m not going to huddle up. So I told the team that we were just going to run the same play and not huddle up.

Well, as you can imagine all the defensive coaches started screaming and hollering “We don’t have defensive guys on the field!” And my response was, it’s the offense that dictates the tempo of the game, not you the defense, the umpire or anyone else. We can go fast, slow, doesn’t matter.

“From that we started to learn other tricks. Like when you go up and you’re in a legal formation and your QB’s hands are under center, the defensive linemen are in a three point stance- they’re flexed, white knuckled, burning up energy.

Well, we know the snap count so were not burning up energy, we’re on “Parade Rest” but are legal and we could snap the ball whenever. We eat up eight or nine seconds on every play of their energy and over time, and especially by the fourth quarter, that starts to pay off. Or if you get into a long drive, say after seven plays you can see the difference- those guys are patting their helmets wanting out.

“The other part of it was they couldn’t substitute. And if they did we ran to the line and yelled “Set Alert”. That meant ball is snapped on “set”, and the “alert” was a play if you were on our sideline, if you were the WR on our sideline, you ran a “Go” pattern. And we’d take a shot.

If you were on their sideline you ran a “Quick Out” right into where their guys were trying to leave the field so it’s almost built in pass interference. We scored 9 TDs on that play in one year. And about three of them nobody even covered the “Go” pattern. So, that’s the birth of the “No Huddle” and how it evolved.”

What led to you being fired from the Bengals? There are a lot of rumors as to how it went down but what actually happened?

SW– “It was the day after the last game of the season, which was on Christmas Eve. Paul Brown was not there, but his son Mike was. I pleaded with Mike before the meeting, “I’m exhausted, I haven’t done any shopping for my family-let’s take a break and we can meet next week.” He said, “No we’re meeting now like we always do after the season.”

And we both went into that meeting tired. Mike said to me and several other people years later that it was a mistake and that he shouldn’t have done it, to force that meeting that quick; things might have been different if everyone was fresh.

“Anyway, we go into the meeting room and it’s Pete Brown, Paul’s brother, who was in charge of scouting and Katie Brown, Mike’s daughter who is a law school graduate and current GM, but wasn’t at that time, and Mike Brown and me sitting around the table. It was a bad year, we had a bad record.

“We’re in that room and during the course of the meeting, Mike turns to Pete and says, “Pete tell Sam how we want him to conduct press conferences after the game.” Well, my personality was to be me. So Pete pulled out these 3×5 cards and the first one said “We played good today and look forward to next week at Chicago.”

They wanted me to tone it down and not talk so much, but I’d explain to a reporter anything they wanted.

They read about three of these cards and I said. “I hear you, I know what you’re after, you’ve been with me for 8 years and know I don’t talk like that and it’s gonna come across so phony. I’ll do my best but I can’t promise I can do that. And he said, “You just resigned.”

He put his fingers to his cheat and arched his fingers into his palm into his sternum and said again, “You just resigned.” I thought he was kidding at first because Mike and I socially, we’re friends, still am, I like him. We had done a lot of things off the field together.

So I jokingly, literally, raised my hand like “Little Johnny” in the back of the class and said, “Excuse me, isn’t that my line? Don’t I get to say it?” Thinking he was going to laugh or whatever, he said “You just resigned” again.

So I looked at Katie (Brown) who was taking notes and said “Katie, make sure you write down that I do NOT resign and that I am not quitting. I caught on pretty quick- I knew I had two years remaining on the contract I was in and my quitting would be a financial plus for you, but I’m not quitting.

“So I stood up, reached out and shook Mike’s hand, then I’m reaching across the table kind of extending over to shake Katie’s hand and I pushed back on my chair and the chair kind of catches back in the carpet like it’s going to fall backward so I reach back in an awkward, very awkward uncoordinated move trying to catch the chair and almost lose my balance and I have to grab the table and hold on while I pulled up the chair to get it out of the carpet so I could scoot it back.

And I’m usually pretty good at doorknobs I rarely miss them on the first try- but I missed the knob literally, kinda banged my head on the door, fumbled around and finally opened the door and walked out.”

Jeff Blake Interview: How To Throw The Deep Ball