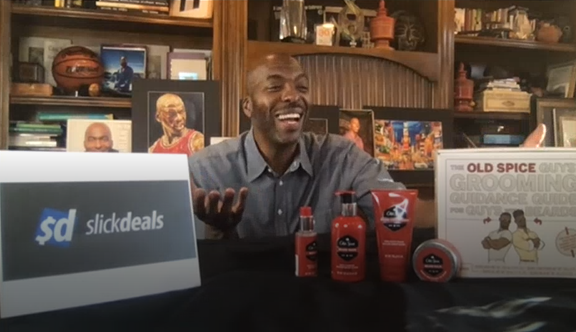 John “Spider” Salley is an NBA great, but his personality is even greater. Check out his tips for Father’s Day, and why he was such a big part of “The Last Dance.”

John Salley is honestly one of the coolest people we’ve ever spoken to at I-80. He even says that he’s been told that he, “Smiles when [he] sleeps.” However, if you just watched his highlight reel, his game is anything but nice.

As one of the integral parts of the “Bad Boy” Detroit Pistons, Salley was responsible for helping knock out Michael Jordan en route to a championship. His tenacious rebounding and athletic ability around the rim made him an absolute terror. So much of a terror, that the Chicago Bulls brought him in to help them with a championship.

He was Jordan’s adversary, then a teammate and now a friend, which gave him a key role in the ESPN documentary, “The Last Dance.” Unless you’ve been living under a rock, you know that the documentary chronicles the Jordan years of the Chicago Bulls, culminating in winning the team’s sixth championship.

It was unreal. I highly suggest you start watching it immediately.

Anyway, Salley is now a family man, and brings that same love he had for the game to his life at home. Sunday is Father’s Day, and Salley wanted to show us what he has on the docket for potential gifts for dad.

i80: John, dad doesn’t seem to get any credit until he does something wrong, so what is something right that we can do to recognize dad on Father’s Day?

John Salley: Well first of all, I’ve been growing out my beard for this quarantine, so go help dad out and get him this full beard kit from Old Spice. Even if you got kids that are graduating, you know these kids nowadays are growing full beards trying to look like [James] Harden. The next thing I got is this site called Slickdeals. Slickdeals has 12 million users on their site and their app. At any given time the community gets together and they get the best deals online. Every time you see a deal, you know they’re going to be the best price. The cool thing is that this community talks to each other to vet the deals and make sure they’re real and you’re getting the best price possible… Isn’t that nice? A community that helps each other. They also have an extension browser for when you shop online.You pick an item, it goes in your cart and Slickdeals finds the coupon code and puts it in for you. And if that’s not easy enough, the editors at Slickdeals have curated a Father’s Day package with ideas for Dad. I have Slickdeals on my cellphone… I constantly go through this thing while we are on lock down, and now I am a shop online expert.

i80: During quarantine I’ve watched a lot of old sports on YouTube, and last week I was watching the 1996 NBA All Star Game, and guess who was hosting the halftime show. It was you! You’ve done so much hosting stuff of the years, forget about it! What has been your favorite thing to host and do?

JS: I wanted to be Johnny Carson so I’m gonna say when I was hosting on BET Live I got to sit, and feel and do it. But my favorite time on television was the Best Damn Sports Show Period on Fox Sportsnet. We had a reunion on Zoom on May 30th. Everyone was there. Tom Arnold, Michael Jordan, Stephen A. Smith, Coach Calipari… It was unbelievable to see all of those people who put the show together behind the scenes who you get to know. I have to say it was my favorite time hosting anything to sit around, talk about sports and laugh about it.

i80: Recently you’re featured a lot on “The Last Dance.” Did you have any idea you were going to have such a prominent role in the documentary?

JS: Yes. This was the crazy thing. I had to sign an NDA and they said, ‘After you do this interview forget about it because you can’t talk about it.’ They asked a lot of questions about Dennis Rodman, and would sneak a Michael Jordan question in  and ask me about a story. They were like federal agents the way that they were asking me questions. Not that I’ve ever been questioned by federal agents… can you see my nose growing? I knew when they started having me do press the week before it came out, I thought that I must be on this thing a lot. All [Michael] said was, “You’re going to like this Sal. You’re going to like this.” I think it told a lot and they got a point across. You got to hear from Michael Jordan, and a lot of times you don’t get to hear from MJ. I think I got to know my friend a lot better. I’m sorry he had to get a psychiatrist because we beat him two years in a row, but  I think it made him better.

i80: Out of all of the questions they asked, was there a story that you didn’t get to tell about Michael or your time with the Pistons or the Bulls?

JS: No. I’m saving mine for the book. I think the book is going to come out one week before I pass, so in about 50 years. There’s not a lot man, honestly. I live a happy, laughing, life all of the time. People have to realize I smile like this all of time. I smile in my sleep so  I hear.

i80: With you and Buddah (James Edwards) coming from the Pistons to the Bulls… During that final run with the Bulls did you guys ever look at each other and say, ‘Dude how the fuck did we get here?’

JS: We lived in the same apartment complex, and I went over to his apartment and he had Kamikazes in a Kool-Aid bowl. I remember us saying that we were Pistons, but when somebody else wants you, you gotta realize it’s a job. It’s a job and you gotta keep that job going.