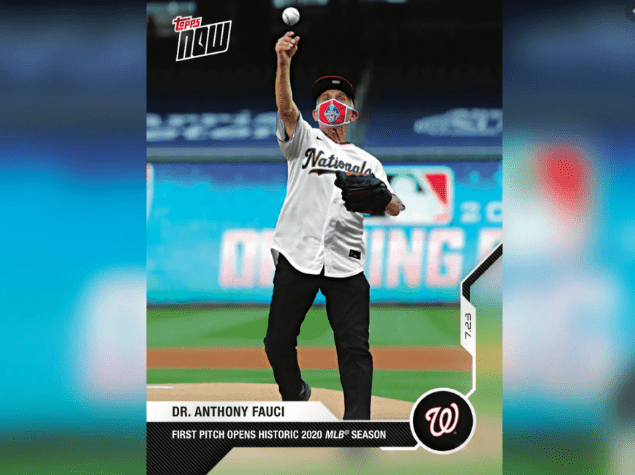 The toss may have been a “flattened curve” low and outside, but the Topps Company’s TOPPS NOW card depicting Thursday’s Major League Baseball opening night first pitch by Dr. Anthony Fauci, director of the National Institute of Allergy and Infectious Diseases and a leading expert on the current COVID-19 pandemic, was a perfect strike, as a record 51,512 copies were sold, more than doubling the previous record for the platform.

TOPPS NOW celebrates the greatest moments in sports and entertainment as they happen with trading cards available for 24 hours only, exclusively at Topps.com.

The 79-year-old Brooklyn native’s pitch came prior to the 2020 season opening game between the Yankees and Nationals in Washington, D.C. The ardent fan wore a Nats hat and jersey as well as a facemask as he delivered.

The previous record for the TOPPS NOW (https://www.topps.com/toppsnow) platform, now in its fifth year of producing daily card depicting highlights of the previous day’s MLB action, was 19,306 copies of the debut of Toronto’s Vladimir Guerrero Jr. on April 26, 2019.

“The popularity of the Dr. Fauci TOPPS NOW card is indicative of how excited fans are for the return of baseball, as well as a tribute to a man that has helped guide the country through this Coronavirus crisis,” said Jeff Heckman, Global Director of Ecommerce.

“The unique collectible has been a hit with not just those who follow baseball but all Americans who are appreciative of his service.”

Among this year’s most sold TOPPS NOW offerings are one depicting San Francisco Giants coach Alyssa Nakken (4,782 cards) and the MLB Players Unite for Change (3,499). The net proceeds from the latter were donated to the Jackie Robinson Foundation.

The success of TOPPS NOW helped spur the Topps Company’s hugely popular “Project 2020,” in which 20 commissioned popular artists re-imagine 20 iconic cards from the past 70 years.

More than 1.2 milllion cards have been sold to date since the first card was issued on the original baseball opening day in March.

“Project 2020,” a first of its kind effort that combines some of the most iconic cross-generational cards in the company’s nearly 70 year history with baseball, re-imagined by some of the world’s most influential, creative and eclectic artists, cartooners and pop culture influencers.

Some of the notable artists on the list include celebrity jewelry designer Ben Yang…aka Ben Baller; Chicago based designed Just Don, who has worked with Kanye West and Nike on major projects; Mexican American tattoo and graffiti artist Mark Machado, known as Mister Cartoon; Australian Tyson Beck, whose recent resign of the NBA logo in the image of Kobe Bryant became an international cause célèbre; New York native and design artist Sophia Chang and L.A. Based streetwear artist Joshua Vides. 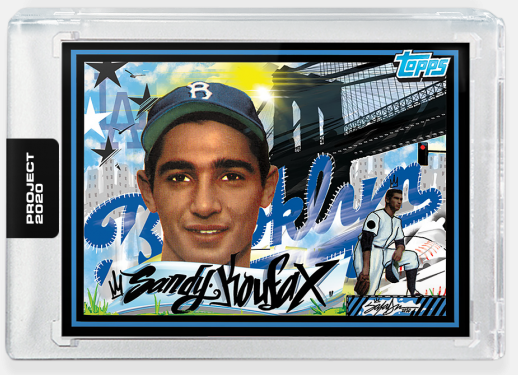 Each of the 20 artists will reinterpret 20 cards, representing baseball’s greatest stars from the 1950s to the present day. The cards will only be available for a 48-hour period from the time each is introduced.

“When we think of the collectible world and where it has evolved today, sports and pop culture continue to collide,” said Jeff Heckman, Global Director of Ecommerce.

“We could not think of a better way to expose trading cards to a new audience than working to reinvent some of the classic baseball cards and personalities of the game of baseball through the eyes and hands of many of the world’s greatest pop culture figures of today.

‘Project 2020’ will be a must have for core and casual baseball fans, and will more importantly showcase the names and stories of the artists and the players on the cards to a global audience whose interests lie well beyond the sport. It is a transformative move we are very excited about.”

“Roberto Clemente and his story have always been inspirational to me,” said Mister Cartoon, whose hometown high school mascot was the Pirates, adding to his longtime connection to the Pittsburgh slugger and made working on the Clemente card extra special. “I want to take each of these classic cards and supercharge them!”

The cards in the Topps Now 2020 offering include:

The artists participating in the Topps Now 2020 set include:

Tyson Beck- Australia based, recently redesigned the NBA logo to look like Kobe Bryant, with a petition to change the logo with over 3 million signatures.

Sophia Chang- Queens native whose lifestyle illustrations and basketball cards have landed her collaborations with Nike, Adidas and Puma.

Efdot- NYC based, paints murals with the ubiquitous “Blob” character as the star of his pieces

Blake Jamieson- N.Y. based painter who has done portraits for over 350 professional athletes including numerous prominent NFL players.

JK5- based in Brooklyn, native of North White Plains, N.Y., who weaves layers of poetry, spirituality, symbolism, color and line across various media.

Just Don- Chicago based, worked with Kanye West on a number of collaborations, including projects for Nike and Mitchell and Ness, as well as other NBA apparel.

King Saladeen- Philadelphia based NBA artist who has done murals at the Philadelphia Airport and various NYC locations.

Naturel- Creative Director for many apparel projects from Crooks , painted one of the most famous Kobe Bryant murals in Los Angeles.

Keith Shore- Philadelphia based; the lead creative for Mikkelar Beer

Gregory Siff – lives in L.A., worked with MLB on a number of projects including Stance

Matt Taylor- Brighton, U.K., artist who specializes in movie poster designs and has collaborated on projects with Marvel, Amazon Studios, LucasFilm and more, as well as ESPN for the US Open tennis tournament.

Andrew Thiele- based in NYC, drew “Whole Squad Ready” art for 2018 World Series; has worked for ESPN on MLB and NBA graphics.

Joshua Vides- Black and White style, based in LA, famous collaborator with Converse in 2019, also produced “locker room art” for MLB at the 2018 All-Star Game.

The images on the cards can be seen at https://www.topps.com/project2020