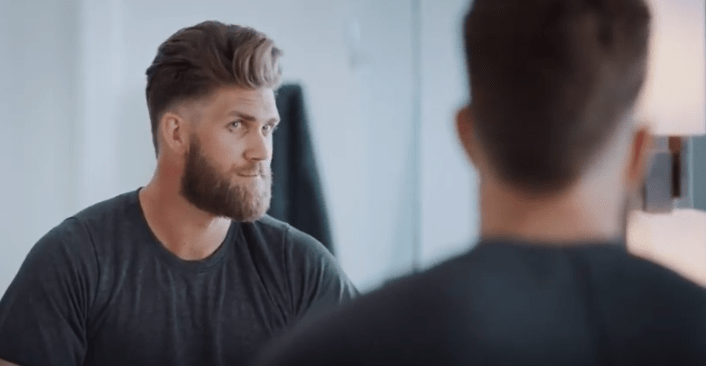 Bryce Harper has had amazing on-field moments that speak for themselves. Let’s use his hair to identify exactly what he’s feeling.

Bryce Harper is one of baseball’s biggest phenomenons.

That being said, Bryce Harper hair has even bigger personality than he does. The guy literally has everything you could want. He’s a superstar, makes millions and just continues to own the baseball world.

You’d think a guy that good at sports would have some sort of flaw. His personality isn’t that great, but really on the outside looking in he has no flaws.

Not a single ONE.

It is really aggravating.

If he’s the one guy that’s going to have it all, then I am going to have some fun and try and make fun of him. I’m sure it’s going to go that well… if Bryce finds this article, he will probably use some amount of his massive contract to send me away for a while.

I’m going to take my best shot at this man… I’m talking Pat Benetar best shot. If he wants to come find me, I will gladly talk to him about it.

With this ballsy confidence comes a certain fear that he will actually find me and hunt me down.

So, without further adieu, I present Bryce Harper’s five feelings by the way he has his hair.

Harper with that slicked back look basically telling everyone to go kick rocks after getting the big time contract from the Phillies.

4. The “Oh god they gave me all that money and now we aren’t going to make the playoffs” Bryce Harper hair look.

Yeah… when you’re making the big bucks, and your team is out of the playoffs, you should be worried.

Batting .250 this season isn’t really helping any of the haters that said he shouldn’t have left Washington.

2. My God I’m going to have to do this all myself Bryce Harper hair… at least I look good.

Damn… I mean, you have to admit he looks great right here even though he looks like he’s playing with a team of fools.

1. Even though we won’t make the playoffs, and you all think I suck, I still look like a damn SNACK.

Here’s my self deprecation… Even after this whole piece, and looking at all these pictures, Harper is still making $330 million over the next 13 years. He wins.