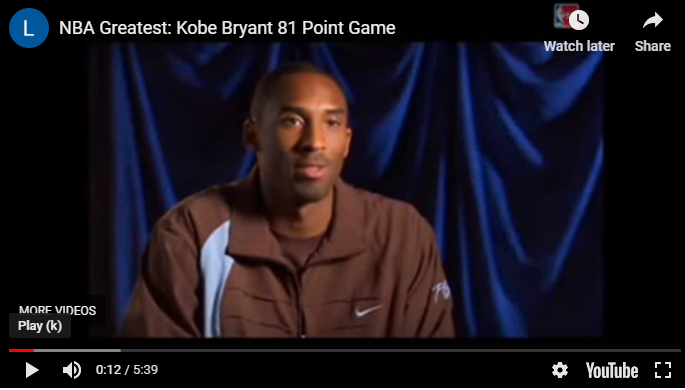 Kobe’s 81 point game on January 22nd, 2006 against the Raptors is his greatest singular achievement.

Like “David” was for Michelangelo. It sums him all up in one piece of work.

After 20 years of watching him make it look easy, I think we’re all became desensitized by watching Kobe Bryant score. “Oh boy, Kobe poured in another 30 point game – yawn.”

Kobe’s 81 point game is the second highest single game total in NBA history, second only to Wilt Chamberlain‘s 100 point game. Only Wilt, David Thompson, and David Robinson had ever scored 70 or more points in a game since Wilt’s 100 point game on March 2nd, 1962. And Kobe almost did it in one half.

And with the exception of a couple layups and dunks, it was all jump shots and three pointers. Check out his final stat line:

What’s really interesting is the progression of his scoring output during the game.

The Lakers trailed the Raptors by 15 at halftime and 16 points early in the third quarter, which is when Kobe turned it on. 14 in first quarter, 12 in second, 27 in third, 28 in the fourth. 55 points in the second half is disgusting.

A popular misconception is that Kobe’s amazing individual performance in some way limited or hindered his team. That what he did was “selfish” or ego driven. But that isn’t true. Was it his fault that he was his team’s best scoring option in a game the Lakers were losing in the third quarter and he decided to take command? No way.

The Raptors were not a good team (14-26) and the Lakers (21-19) had played to the level of their competition all season.

“I just remember we were down 16 points to a bad Raptors team and we had just lost I think to Houston the game before and it was just kind of doom and gloom. We needed to win and I just got hot”, said Kobe about his performance on January 22, 2006.

Smush Parker was the team’s third leading scorer (11.5 ppg) and people are wondering whether Kobe took too many shots? Kobe ended up averaging 35.4 ppg that season, the highest average in over 20 years.

The Lakers would ultimately make the playoffs with a 45-37 record and lose in the first round in an incredibly entertaining seven game series versus the Suns, in which the Lakers led 3-1 and lost three games in a row.

You could literally see Kobe run out of gas. They were only going to get as far as they could ride Kobe, which is why the 81 point game is more indicative of how important Kobe was to the team, rather than Kobe being “bigger” than the team.

“That game we needed to win,” Bryant said. “We kind of broke away towards the end there, but it was a tough one for us.”

“I really don’t think about it too much,” said Kobe about scoring 81 points. “I still don’t know how the hell it happened, to be honest with you. It’s just one of those things, I guess.”

81 points in a game is just insane.