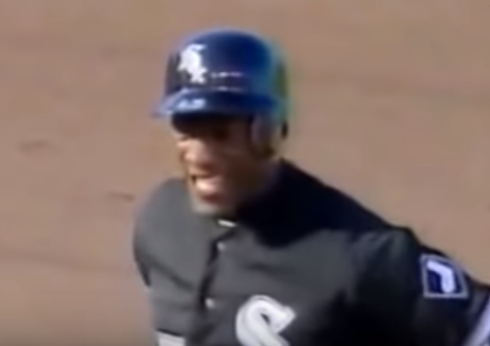 In 1994, Michael Jordan played his only MLB game when the Chicago White Sox played an exhibition against the Chicago Cubs.

It’s something Chicago fans will never forget ever.

The day that Michael Jordan played one game at the Major League level. Well, it was just an exhibition between the Cubs and White Sox to fill the stands.

It was a classic day game at Wrigley, and the stadium flooded with people to see Michael Jordan play against MLB talent. He started the game in right field, and batted sixth in the White Sox lineup.

Michael Jordan baseball? He actually had a fantastic game against the Cubbies, so let’s take a look at the recap.

Jordan really did show some promise, in a rivalry game that had the look and feel of an October pennant race.

Jordan made an early play in the outfield on a lazy fly ball, and based on the crowd reaction you would’ve thought it was the last out of the World Series.

In fact, just earlier in the game second baseman Joey Cora made an out on a fly ball to right field, and the crowd booed.

THEY BOOED AN OUT.

Everyone in Chicago, Cubs and Sox fans alike, just wanted to see Michael do great things.

Later in the game, Jordan made an error and the crowd turned on him. Chanting “rookie” continuously.

Isn’t it crazy how quickly sports fans will turn on their own? Come on… really? Chanting rookie at the best basketball player ever seems a bit outrageous.

He didn’t do much more in the field so we should look at the day he had at the dish.

Jordan popped out on a 3-0 count in his first appearance at the plate. It wasn’t an ideal situation for Michael Jordan baseball, but it did get better as the day went on.

The score in the game was 4-0 Cubs, when Jordan came up clutch as he was so accustomed to doing on the court. The at-bat resulted in an RBI single down the third base line.

The White Sox pulled the game to 4-1, and with Jordan on first there was a passed ball getting him to second. The very next pitch, the White Sox went deep to bring the score to 4-3.

Later in the game, with the Sox down 4-3, Jordan stepped up to the plate with a runner on third.

Again, the master of clutch delivered. The Michael Jordan baseball experience looked a lot like the MJ NBA experience:

Jordan hit a sharp double down the left field line to tie the game, and driving in his second RBI of the day.

The game would go on to end in a 4-4 tie after 10 innings because it was an exhibition game.

Overall, Jordan did more than what most people expected in his first, and only, appearance in a White Sox uniform. Going 2-5 with two RBIs, one of which tied the game, and having one put-out on the day.

You can’t blame Jordan for chasing a dream, in fact I admire him for it, but I just wish he stuck completely to basketball and kept dominating the hardwood.