For a five year period there was no wide receiver in the NFL that was more productive than Joe Horn.

The only thing more amazing than Horn’s on field production was his unlikely path to the NFL which included not playing a down of football for two years after leaving college.

After playing two years at tiny Itawamba Community College in Fulton, Mississippi, Horn found himself working at a Bojangles restaurant in Fayetteville, Mississippi with no prospects of playing football as a career.

Down to the final $6 in his possession, Horn spent $3.99 on a Jerry Rice workout from a local Blockbuster and studied the drills and moves Rice performed in the film.

Horn then made a highlight video of himself working out and sent the tape to multiple professional teams across America and Canada.

One response Horn received was from the Memphis Mad Dogs of the CFL who offered him a contract after viewing the tape and in his first year accumulated 1,414 yards on 71 catches.

From there Horn signed with the Kansas City Chiefs where he spent four years primarily as a special teams player though the six TDs he caught in his final year with the team hinted toward what was to come.

Horn signed with the New Orleans Saints in 2000 and immediately surpassed their expectations ranking in the top ten in receptions (7th), yards (8th) and touchdowns (9th) that year.

Even though he came out of nowhere and produced immediately, Horn was no “one year wonder”.

From 2000 to 2004 Joe Horn averaged 87 receptions, 1,257 yards and 9 touchdowns per season and became the Saints all time leading receiver.

Horn made the Pro Bowl in four consecutive years from 2001-2004 is currently ranked 45th in NFL history in receptions with 603.

Is it true that your football career basically started because of a highlight tape you made yourself?

“Yes that is true. I bought the highlight film and I respect Jerry Rice to the utmost. I love
Jerry Rice as a player and his work ethic. When I got the tape it was the last little money I
had. I watched it and grew from it.”

You are the classic underdog. What was the key in going from not even playing football to becoming an All-Pro?

“Staying prayerful, man. Staying in shape and wanting to win, having a desire to win. That’s what I did and everything worked out well for me.” 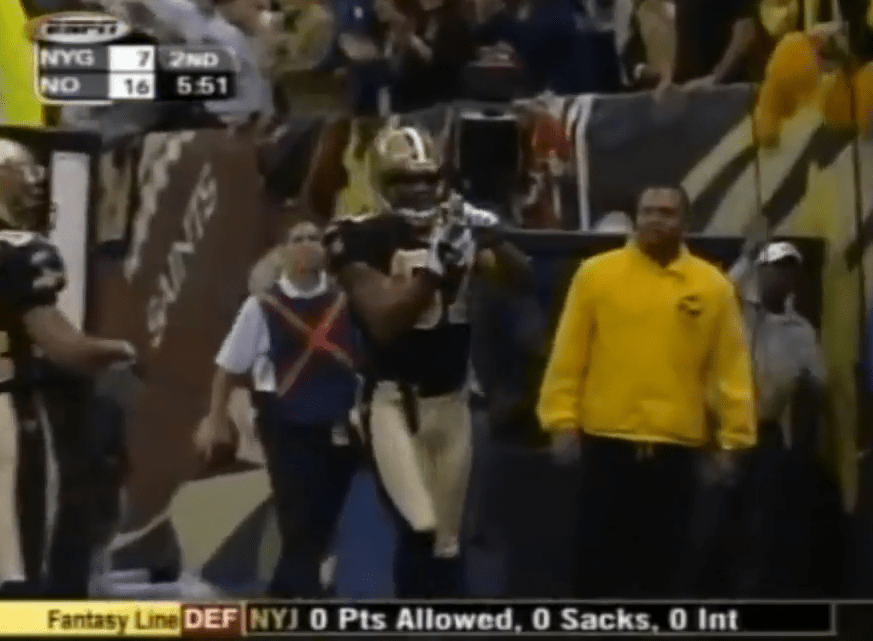 How often do you get asked about your famous “Joe Horn cell phone touchdown celebration?“

“Mostly everywhere I go. And it’s fine, I had fun with that. That’s what was “in” at the time, the endzone celebrations. And I told my kids I was going to call them, so I did! It’s a fun conversation to have with people who love the game and atmosphere of the NFL.”

When you broke into the league it took a wide receiver multiple years to get acclimated to the pro game. Now we have rookies making immediate contributions. Has the game changed that much?

“It depends on offensive coordinator and head coach. Some coaches are going to bring some guys along slow and some guys are going to throw them in the fire. It can be a money issue too. You’re a first round pick or you’re coming in making a lot of money and you get thrown into the fire right away. I’m proud of those guys.”

What do you think about going full circle and rejoining the Kansas City Chiefs or the New Orleans Saints, teams that need a wide receiver?

We’ll see, I’m optimistic but I’m going to make sure the situation is good for me. I want to  join a team, go to the playoffs and take it to the Super Bowl. That’s why I left Atlanta. I didn’t leave to go somewhere else to lose. I’m not saying either of those programs are losing programs, but I want to go somewhere that I can help a team win.”

Love old school NFL? I got you, boyee: