As a kid in the 90’s there was nothing as cool-looking as a deep ball from Jeff Blake.

Warren Moon threw the prettiest spiral and had a cannon, but Blake’s deep ball was different.

The ball jumped out of his hand, expanded in a mushroom cloud shaped arc, and delivered itself into the hands of his receivers unlike any other quarterback I have ever seen.

Though I have never had allegiance to the Cincinnati Bengals, the memory of his ability to throw the bomb subsisted and consistently re-emerged every time I heard the query, “Who threw the best deep ball in history?” At least one other dude on YouTube agrees with me:

As the only marketable player on some bad Bengals teams in the 90’s, Blake’s success is largely forgotten.

A veteran of 14 NFL seasons, Blake amassed 21,711 passing yards, with 134 touchdown passes, and 99 interceptions. A mobile quarterback, Blake ran for 2,027 career rushing yards and 14 touchdowns. He also appeared in Super Bowl XXXIX with the Eagles.

His best year came in 1995 when he threw for 3,822 yards and 28 TDs and made the Pro Bowl. In that game he completed a Pro Bowl record 92-yard touchdown pass to Yancey Thigpen.

Check out this Jeff Blake interview and ask yourself, “Who threw a better bomb than Blake?”

Quarterbacks in your era were beat up every week – there is no other way to put it. Talk about the NFL now compared to what you had to go through.

Jeff Blake: “Well if I had to play now, I’d hold the ball a little bit longer, stay in the pocket a little bit longer, because I know they won’t be able to hit me! You have a different mindset as a quarterback now because you know you aren’t going to take those hits. Guys who have played for a long time, like Tom Brady and Peyton Manning, they’ve had a little bit of both. For them to play now, it’s like nothing for them, and you see it with their numbers. They can stand back there and feel comfortable knowing that, ‘Hey, if somebody hits me hard, we’re going to get a penalty. So I can stand back here and make this throw.'”

Do you remember the biggest hit you ever took?

Jeff Blake: “Yeah, I do. It was by John Randle of the Minnesota Vikings. He picked me up, jumped about five feet in the air with me, with my legs wrapped around his waist, and he slammed me to the ground. He pretty much knocked me out. I blanked out for a minute and he knocked all the wind out of me. I had to come off the field and come out for one play, then I went back in the game because there was no concussion protocol back then. If you got your bell rung, you went out for one play. Then if you could see, if you could function, you’d be right back in the game.”

What made you so tough, a six-foot quarterback coming out of East Carolina? What made the successful quarterbacks so tough? Was it your will? Was it just wanting to be out there?

“Just the time we grew up in. You talk to the guys that played in the 60s and 70s, they felt like they were even tougher than us. Less equipment to protect them and things like that, just a different era of society.” 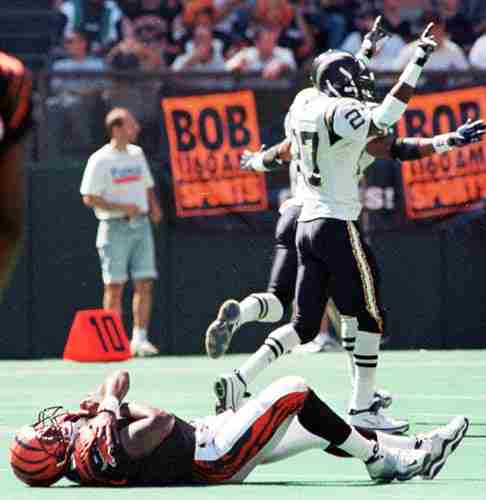 I always thought Riverfront Stadium looked cool to play in, but that Astroturf looked like it was about as thick as the linoleum in my kitchen. What did it feel like?

“Yes, concrete with carpet on top of it. And it was a think layer of turf. It wasn’t a thick layer. The turf was very old so the padding underneath had deteriorated in most spots. They played baseball there on it too, so that added a lot of wear and tear as well. It felt awful, tasted worse.”

You threw the best deep ball of any quarterback I’ve ever seen at any level. What is the key to that?

“Well, people usually pay me for that information (laughing). You’ve got to check out Maxlife Direct. Go to maxlifedirect.com and you can get information on deer antler spray. I’ve been using it now for about a year and a half. I had a lot of injuries playing professional football, broke my foot, had a Lisfranc fracture in New Orleans.”

That’s the year the Saints were 7-4 and in first place when you got hurt.

“Yep, then Aaron Brooks came in and the rest is history. But deer antler spray has helped me recover from that injury, some problems I had with my knee, it fights inflammation and it helps me keep my strength up and keeps me in shape. I’m at my playing weight right now and feel great and it’s because of Maxlife Direct. I can’t live without the deer antler spray at this point.

“It’s a spray that you spray under your tongue. It takes a couple of days to get into your system, but once you do that, you can feel it and tell the difference.” 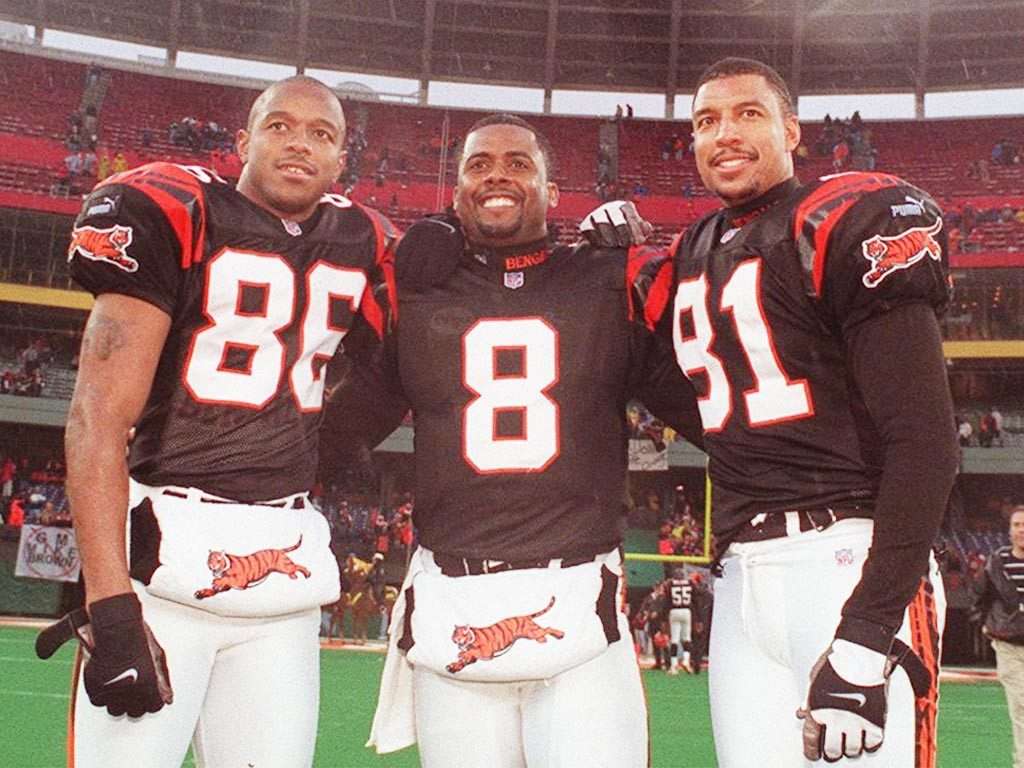 I vividly remember you hooking up with Carl Pickens and Darnay Scott for long TUDs when the team had little else to offer and everyone knew it was coming. How did you do that?

“It was tough, due to the fact that we didn’t have a lot of amenities that other teams had. But what was crazy about when I got there is that we had a lot of first round draft picks on defense. We had ‘Big Daddy’ Dan Wilkenson, Alfred Williams from Colorado, Daryl Williams at safety, Rod Jones at corner from SMU – we had some good defensive guys. And just for some reason, we just couldn’t pull it all together. Rico McDonald, Steve Kovar, so we had a lot of guys, James Francis from Baylor. We could move the ball often but for some reason we just couldn’t stop anybody. We would lose games 45-42.”

As the Bengals quarterback and at the height of your productivity, did you feel like you had a target on your back? The running game wasn’t helping much.

“They knew that if they could stop me and Pickens they’d have a good chance of winning the game. Which made it tough on us as a unit to go out and perform every week. I look at Russell Wilson; I think he’s a great quarterback for his age and how well he has done. But with Marshawn Lynch, it makes his job so much easier. Just like Tony Romo. Romo struggled a little over the years, but look what he’s able to do this year with DeMarco Murray, the leading running back. It makes it so much easier for an offense to click when the defense has to play the run. And it becomes easier to throw the football.”

Yeah, due to the fact that you can’t touch the quarterback, there’s so much more passing now, yeah. Guys are more in the shotgun, just letting the ball go. It’s a fun time to play. Back when I was playing, 3,000 yards was the thing. Now, 4,000 yards is the thing. If you’re not in the 4,000 yard club, you’re not ballin’.

Talk about Carl Pickens and the relationship you guys had.

When I first got to Cincinnati, Carl and I hit it off right away. We had a lot in common, we hung out together, we ate together, we practiced together, and we played together. That’s why we were able to produce the way we did. If we didn’t have that chemistry off the field, there is no way we would’ve had it on the field.  You read each other’s minds before the play, during the play and after the play. It made the game fun and exciting.

Height is overrated because as a quarterback you’re looking for passing lanes, throwing through lanes. You’re not throwing over people. Even a guy like Tom Brady will tell you that.

What was your favorite year of your career?

Probably in 1995. The year I went to the Pro Bowl, it was fun. And in 2004 when I was backing up Donovan McNabb, we went to the Super Bowl that year. It took me 13 years to get there, so I was excited about that.

Describe your memories of the Super Bowl.

it was great to be in that atmosphere, to have that opportunity on that big of a stage. I wish I could’ve played in it, but I got there. And that is more than a lot of guys are able to do.

In 2003 you were a free agent, along with Kurt Warner, Kordell Stewart and Jake Plummer. As a Bears fan, I still remember hoping they would scoop you up, checking the newspaper every day. What was that free agent process like for you?

I took a visit to Chicago that year and thought maybe they would be interested in me, we had several talks. But they took Kordell at the time and I went to Arizona. Then I wound up going there in 2005.

Yes, they brought you on as a backup. How difficult is it to be a stud for so many years, then transition into the role of the backup?

You go out and practice hard every day. No, I don’t accept it but there is nothing you can do about it. The only thing you can do is to continue to practice like you are the starter. Which is a good thing. A lot of guys who are backups don’t practice like starters because they are what they are – a backup. But when you start for a long tine and you come in that position, you don’t know how to be a backup; you’ve only been a starter.”

Greg Olsen Is A Hall Of Fame Tight End and You...

Andre Johnson Is A 12 Month CD With Flat .50% Interest