Which college has the most NBA players?

For the fifth season in a row, Kentucky and Duke boast the most active players around the league.

The Wildcats have 27 total players on starting rosters for the 2022 NBA season. Duke has 22.

The Kentucky Wildcats have 32 players in the NBA. All-Stars Bam Adebayo and Devin Booker (son of Big Eight Player of the Year Melvin Booker) are known studs already.

Colleges with the most players on 2020-21 NBA rosters

Overall, Kentucky has produced the most NBA players with 107 players appearing on an roster. UCLA comes in a close second with 97 players produced all-time.

What college has the most players on the same team? As of 12/15/19, five Duke Blue Devils are on the New Orleans Pelicans: J.J. Redick, Brandon Ingram, Frank Jackson, Jahlil Okafor, Zion Williamson.

Four teams have three players from the same school:

Since the NBA’s formation in the 1940s, there have been 3,394 players on rosters in both the United States and Canada.

When it comes to career length, Clemson holds the longest all-time career length with former players averaging almost eight years in the league.

Alabama comes in second place with almost seven and a half years on average as Auburn follows close behind.

What College Has The Most NBA Players By Decade? 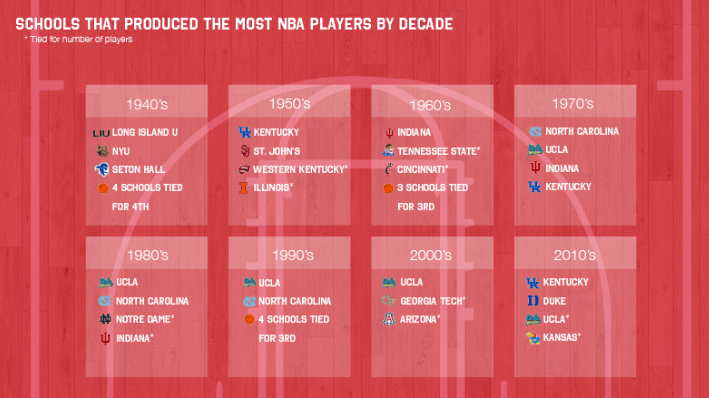 In the 1960s, Indiana produced the most NBA players.

In the 70s, North Carolina took over.

UCLA ruled the 1980s through the 2000s until Kentucky took control of the past decade.

That’s not surprising, as Kentucky has appeared in the NCAA tournament every year except for two since 2000 and won the tournament most recently in 2012.

Here are some additional takeaways:

5 thoughts on “NBA Players By College: What College Has The Most NBA Players?”