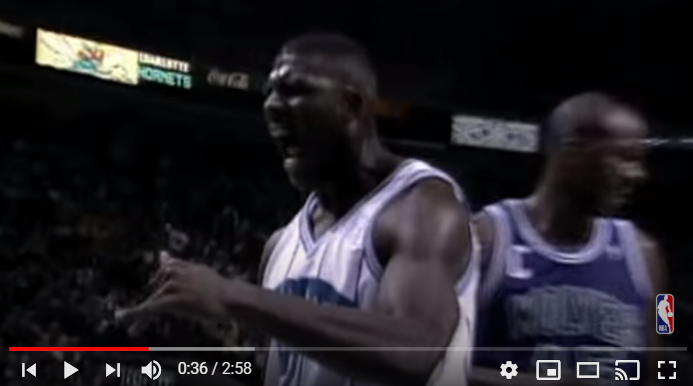 In the mid-nineties, there was no cooler team in any sport than the Charlotte Hornets.

When New Orleans became the Pelicans, it cleared the way for the Charlotte Hornets to return to the NBA.

Even though the Hornets never won a title, never even advanced beyond the second round of the playoffs, they were a cultural phenomenon thanks to huge personalities and the coolest jerseys in NBA history. 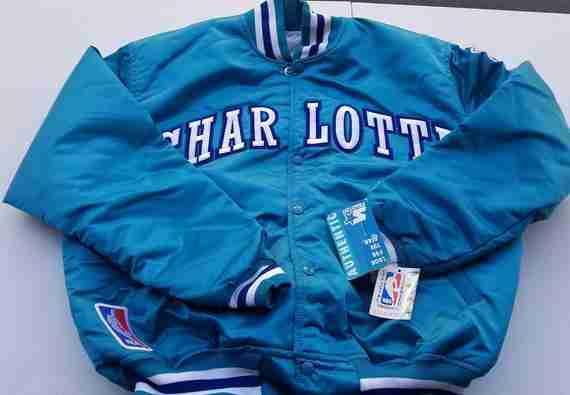 The Charlotte Hornets were established in 1988 via the expansion draft, which saw them build the squad around Kelly Tripuka, Dell Curry, Rex Chapman and 5-3 Muggsy Bogues, the shortest player in NBA history.

But when the franchise was re-launched, they moved to the Spectrum Center in downtown Charlotte.

The Coliseum hosted 371 consecutive NBA sell-outs from December 1988 to November 1997, which includes seven playoff games. It hosted its final NBA basketball game on October 26, 2005, a preseason game between the Charlotte Bobcats and the Indiana Pacers.

Even though they weren’t great, the Hornets were a surprise success in their first season, leading the NBA in attendance (something they would achieve seven times during 14 years in Charlotte). Eventually, the Hornets would sell out 364 consecutive games, essentially nine consecutive seasons.

The Hornets won 20 games in year one, 21 in year two, 26 in year three and hosted the 1991 NBA All-Star Game. The momentum was building and the All-Star Game was a national introduction.

Prior to year four, the Hornets entered the NBA Draft with the number one overall pick and made a pick that affected the franchise for years to come.

Larry Johnson, who would eventually become “Grandmama”, was the reigning Naismith Award winner as the best player in college basketball.

And even though they won less than half of their games (31), they now had their identity and face of the franchise. LJ was tough, charismatic and one of the best players in the game averaging 19.2 ppg and 11 rpg as a rookie.

After Johnson’s Rookie of the Year season, his jersey began to pop up more and more outside of Charlotte, in places like Omaha, Nebraska; places where they had no business popping up.

In 1992 the Hornets held the second pick in the NBA Draft and used it to select Georgetown center Alonzo Mourning. Equally as tough and talented as Johnson, suddenly the Hornets were raising eyebrows.

Johnson, Mourning and Kendall Gill, a #1 draft pick three years prior was the highest scoring trio in the league. In year five, the Hornets had their first winning season (44-38) and made their first playoff appearance, upsetting the heavily favored Boston Celtics in the first round. Charlote was eliminated in the second round, but the groundwork was set; the Hornets were now a legit NBA franchise.

With the success, even more people jumped on the bandwagon and it was now “cool” to say you were a Hornets fan.

And when you said it, you weren’t mocked; you would generally receive a knowing nod of approval and the unspoken, “This dude is cool,” sentiment of the time.

In 1993 the Hornets struggled to a 41-41 record due in large part to injuries to “Zo” and “LJ” and missed the playoffs. Mourning averaged a double double, and Johnson  was second on the team in both scoring and rebounding.

Even though the franchise took a step back, point guard Muggsy Bogues had the best season of his career. Bogues scored 10.3 ppg, his 10.1 apg was second most in the league and he led the league in assist to turnover ratio. Bogues was the spark-plug that made the Hornets one of the most exciting teams ever.

The next season, the Hornets finished the regular season going 50-32, and returned to the playoffs. Johnson and Mourning again led the team in points-per-game, while also leading the club in rebounding. However, Charlotte was bounced from the playoffs in the first round, falling to the Chicago Bulls in four games.

Following the season, the core of the team, and of the franchise, was broken up as the Hornets traded Mourning to the Miami Heat.

By 1995 the Hornets were selling the most jerseys in the league. But, the Mourning trade really marked the beginning of the end for the Hornets as a successful NBA franchise led by the exciting style spearheaded by Bogues, Johnson and Mourning.

After a 41-41 season, LJ was dealt to the New York Knicks. Bogues was limited due to injury, losing minutes to Kenny Anderson, and was no longer a Hornet after 1997.

The Hornets enjoyed success even after the “Big Three” left, making the playoffs in five of the following six years before the franchise left Charlotte for New Orleans, but it was a completely different team.

And with it, the buzz and aura of coolness that had been established, slowly dissipated.

Sure there was success, but the early Hornets teams were exciting to watch, especially as they grew from league doormat to consistent contender.

All NBA fans saw this development and felt like they were a part of it, which was expressed by the record setting merchandise sales. Liking the Hornets even when they were good wasn’t like liking the Yankees and Dallas Cowboys when they were good; there was an understated cool to it that people just “got.”

So why should you care that the Charlotte Hornets have been reincarnated? Because with a built in fan-base and the re-birth of the fantastic uniforms, NBA fans will at least be treated to whatever magic is left.

And for as bad as they have been as the Charlotte Bobcats under Michael Jordan, it’s basically like rebuilding the Hornets again, from the ground up, for a second time.

And maybe if we’re lucky, we’ll get to see bikini brief-esque shorts like the ones Kelly Tripucka has on in this introductory press conference from 1988: