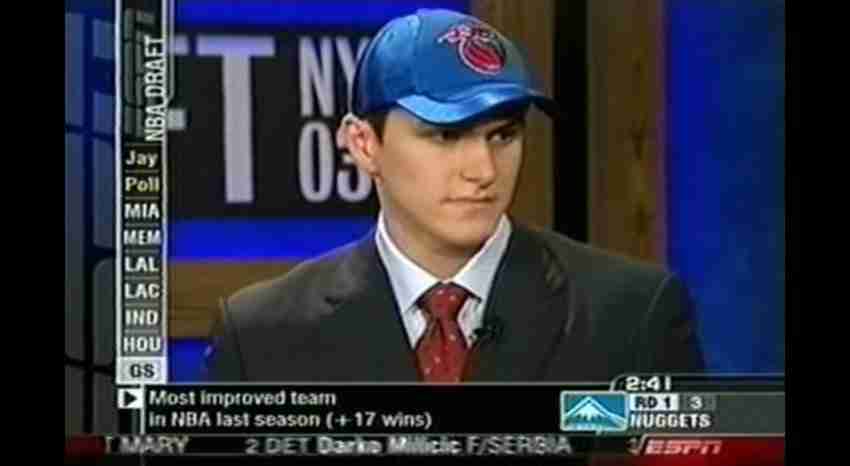 Poor Darko was 10 years too early. What’s funny about the 2003 NBA Draft class is how people remember it.

Sure, everyone knows that LeBron went number one overall, and then Carmelo Anthony, Chris Bosh, Dwyane Wade and Chris Kaman were all drafted in succession. But the only thing anyone remembers about the 2003 NBA Draft is how Darko Milicic went number two overall.

In hindsight it’s an obviously questionable move but the thing is, at the time, when it was happening even, it was an equally questionable move. How rare is that? A decision that is equally bad from the instant you make it to several years later and everyone knows, yet no one can stop it! Hindsight doesn’t even make it look worse, as it’s prone to do, generally speaking; it is worse just by existing.

Maybe it’s because his name is “Darko” which makes a lot of people think of the semi popular cult movie Donnie Darko or maybe it’s the unfortunate coincidence that Darko looked a lot like a taller, less devious Joran Van Der Sloot during a time when he was all over the media, but whatever the reason, everyone remembers him and the equally questionable movie. Which interestingly, was committed and presided over by one time NBA Executive of the Year Joe Dumars. And it has to be equally bad for him. No one remembers he rebuilt a Pistons franchise that went to the Eastern Conference Finals six straight years.  All they remember is Darko.

The Pistons were so good at the time that they just sat him on the bench (the way NFL teams do with young QB’s) and hoped he would absorb knowledge and “know how” from all the talent around him because the Pistons were loaded at the time and he was only 18 years old.

But instead of accepting the presumed gamut thrown at him by the tough, physical big men that littered Detroit’s roster at the time (Ben Wallace, Rasheed Wallace, Corliss Williamson, even Elden Campbell for crying out loud!) and excelling, Darko played the role of shrinking violet; instead of spurring his development, it spurned his development and damaged his psyche so bad that he dyed his hair horribly, further ostracizing him from the team. On the plus side, he did outscore ESPN analyst Hubert Davis in his final year in the NBA by 1.4 ppg- only because Davis didn’t score a single point that season.

But the really sad thing is that until two years ago, he had won more NBA titles than LeBron, Carmelo and Chris Bosh combined!  I know it’s a low blow LeBron fans, but someone had to say it!

You have to wonder how Darko feels about that ring. When he goes back to Novi Sad, Serbia one can only assume he’s treated like a hero, a national treasure and presumably he laps it up, if only for show to give the people what they want.  But deep inside, when he’s all alone in his mansion at night, he probably feels like Gollum in Lord of The Rings and hates it; hates that he loves it, hates that it defines him, hates that he isn’t worthy of it. But yet, he’s stuck with it, and the ring with him. Curses.

Anyway, here’s the breakdown of the first round of the 2003 NBA Draft:

A few of the better picks:

– Lebron James at one

– Carmelo Anthony at three (two if Darko is never birthed)

A few that didn’t pan out:

Was the first round of the 2003 NBA Draft the best in NBA history?