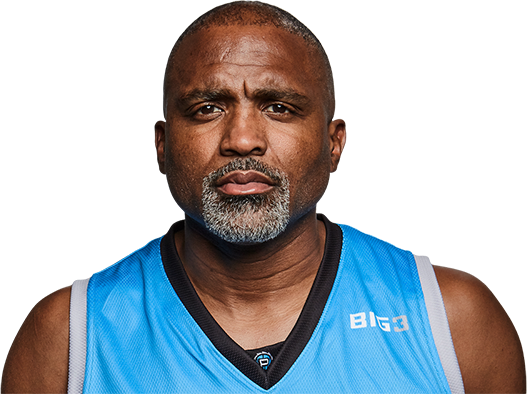 Cuttino Mobley played 12 seasons in the NBA when you could get a little physical without someone screaming “CTE!” any time an elbow gets administered.

In this interview, “Cat” told me that’s why he likes the Big 3 – that it’s a bunch of 30-somethings “playing chess, not checkers.” Which is why CBD is so important. CBD isn’t weed, but Cat says it makes him more alert and his body feel good.

Fresh off his shot to win the 2018 Big 3 championship, Cuttino compared that to his first game-winner as a rookie in the NBA and told some solid old school basketball stories about hanging with MJ, Sir Charles, and Pip.

Where does your game-winning shot to win the Big 3 championship rank on your list of basketball accomplishments?

Cuttino Mobley: My first game ever fellas, I’m a rookie. There’s Scottie Pippen, Charles Barkley, Hakeem Olajuwon and we’re playing against the Lakers. Derrick Fisher, my guy, Kobe Bryant, the guy I grew up with in the same city, my guy. They had Shaquille O’Neal. And I didn’t play that game.

Second game, coach puts me in against Golden State. I play the whole game and do really well. Charles Barkley passes it to me at the top of the key, I shoot a three, game winner. That was my very first game and I hit the game-winner. That was great. But the Big 3 game-winner was a little more meaningful because I left the NBA not on my terms. Being able to come back and play in the Big 3 and against my peers. That has made it really enjoyable, to show I can still play.

What’s the biggest mark of success for the Big 3? Is it to have you or another player get back in the NBA? Or, is it a free-standing league that doesn’t even care about the NBA?

Cuttino Mobley: For me, it’s all about your body. I can’t run around with twenty-somethings. A lot of the guys in the Big 3 are in their late-30s and I doubt that they can. I think the 3 on 3, guys understand the game – we’re playing more chess. Where the younger MBA guys are playing checkers. They use their athletic ability and speed. If we get out there in 5 on 5, we might get ourselves hurt! You might pull something. But, it is way more physical than the NBA.

If you were going to buy the jersey of any Big 3 player other than yourself, who would you buy?

How do you use CBD?

It helps your body tremendously. For me, I’m more awake; I’m more aware. The aches and pains aren’t there. It attacks the inflammation inside the body the more you take it. You’re just more equipped to do more things in life. You sleep better at night, and wake up early in the morning ready to attack the day. Go onto the Peak Health Center website. Dr. Bomi Joseph will get you taken care of.

Cuttino, if my co-host Joe Kinsey ate some CBD, how would that improve his free throw percentage? Currently he can make 4 out of 10.

Cuttino Mobley: It’s gonna stay at 4. It MAY boost up to about 6.

You started your NBA career with the Rockets and Pippen, Barkley, Olajuwon. During your 14 years with them, you also ushered in Yao Ming, Tracy McGrady, Steve Francis. What do you remember about the first era of studs, and then being around for the younger guys?

Cuttino Mobley: Like I mentioned, as a rookie I was in a locker room shared by Barkley, Pippen and Olajuwon. Charles and Michael Jordan were good friends, and obviously Scottie, so he would come around a lot. That’s the cream of the crop. The top of the top. After that, it really didn’t matter to me. Scottie was a good friend of mine. And he mentored me. And then when MJ was around, and Charles, they all chipped in. So not are you only on the highest stage, but you’re with four of the top 50 players to ever play the game. I got that awareness at 23-years-old and it stuck with me.

It just depends on your cup of tea. LA is the most diverse. You have people from all over the world. I would say LA because people are not from there.

You’re a big fashion guy. How do you feel about short, tight pants that expose your ankles?

It’s all about the loafer. If you have loafers on, that’s a for sure. You want to be able to show the loafer. You don’t want to wear pants that drape over the loafer because are they ugly shoes or not? Like Julius Erving – he wears his loafers with no socks. And you can see a little bit of ankle bone.