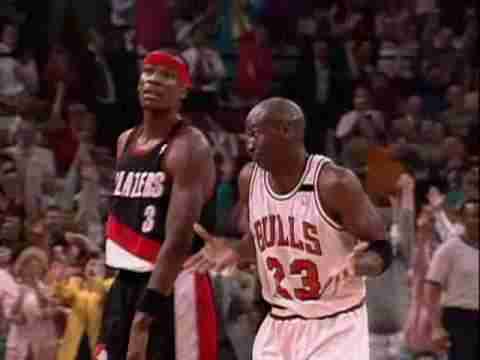 Today in 1992, the Michael Jordan Shrug Game happened against the Trailblazers.

When it was over, MJ had the greatest half in NBA Finals history.

The Bulls defeated Portland 122-89 in Game 1 of the NBA Finals on June 3rd, 1992. Michael Jordan, who finished with a game-high 39 points, set NBA Finals records for points scored in a half (35) and three-point field goals made in one half (6).

After the sixth made three-pointer, Jordan turned to the mid court TV camera and shrugged as if to say, “I guess everything’s going in.” Unknowingly, his shrug created one of the most indelible images in NBA history and added further to his legacy in the process.

The two teams appeared headed to face each other for most of the season and comparisons were made between Clyde Drexler and Michael Jordan throughout the season. Portland came out super hot to start the game, making their first seven field goal attempts, and took an eight point lead.

Then, Michael Jordan turned it on. Portland was leading by 1 at 45-44, but then Chicago went on a 22-6 run to grab a 66-51 halftime lead and take control, ultimately winning the game by 33 points.

“I started running for the three-point line; it felt like a free throw,” Jordan famously said after the game. “I set another goal … a reasonable, manageable goal that I could realistically achieve if I worked hard enough. I approached everything step by step.”

In any different era, the Portland Trailblazers squads of the early 90’s would’ve walked away with at least one ring. The Seattle Supersonics of the late 90’s would later feel the same sting of a Bulls team that is considered one of the greatest dynasties in NBA history.

The Bulls would go on to win the series in six games. Michael Jordan was named Finals Most Valuable Player for the second year in a row, to go with his sixth straight regular season scoring titles.

I Milked This Klay Thompson Interview For All It Was Worth

Why NBA Super Teams are a Three Point Play for the...