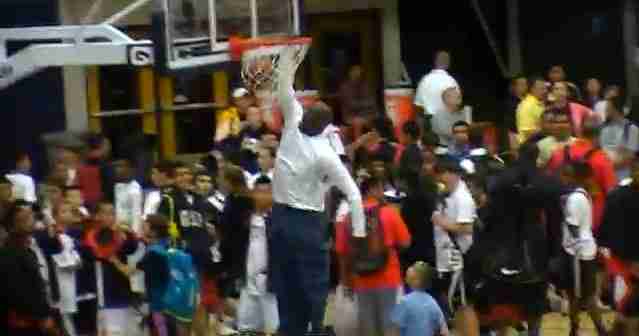 Based on the video evidence, he can do it with ease. It’s always depressing when you see a once dominating athlete get out of shape and overweight. But at age 50+, MJ is nowhere near close to the sad cliche.

It’s pretty cool to see Jordan casually stroll to the rim with no urgency and throw it down. It didn’t even look like he warmed up.

Here he is in 2011, throwing it down even easier at a Charlotte Bobcats fantasy camp. I wonder how much they paid to get into the camp.

In his documentary on NBA TV aptly titled The Doctor, we are given video evidence of his ability to drive to the hole and flush it.

While we’re on the subject of old school ballers slamming it down, I really want to know if Charles Barkley can still dunk. After losing 100 pounds, I’d like to see what kind of springs he has left.

Speaking of being old and having springs, here’s a video of former Slam Dunk Contest champion Spud Webb “dunking.””

Do you think that was real? How bad of an idea would it be to have an “Old School Slam Dunk Contest” during NBA All-Star weekend? It sounds ridiculous, but would it not be more watchable than the “Shooting Stars” challenge?

Who is an old school NBA star you want to see slam it down? Did I hear someone say Larry Bird?