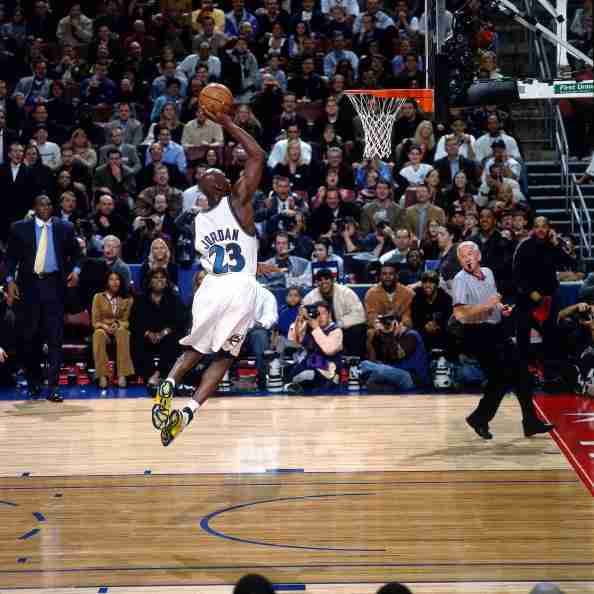 The accepted narrative in regards to the Michael Jordan Wizards final season is the numbers he put up in his final two seasons were done at the expense of his team.

That Jordan was old and looked it, hanging on just long enough to average 20 ppg. That it was a shtick because he was a part owner and head of the Wizards basketball operations. That it was an ego driven move that no one other than Jordan benefited from.

So I dug into the stats and found quite the opposite.

During the 2002-03 season, Michael Jordan turned 40-years-old. Of all major sports the NBA is probably the most unforgiving in terms of deteriorating skills.

If you’re old and slow it can’t be hidden. In the NFL, you’d only play in certain situations, in certain packages. In MLB, you’d have to be a DH or some kind of pitcher. In the NHL, it’s the same thing- very few guys play that long and remain productive.

It wasn’t like MJ was only playing 20 minutes a game, hanging on even though his physical skills had disappeared.

That season he played 37 mpg, second on the team only to Jerry Stackhouse. He was second in points to Stackhouse (20.0 ppg), second in rebounding (6.1 rpg), fourth in assists (3.8 apg) and first in steals (1.5 spg). He was even fourth on the team in blocks with 0.5 bpg. He was also the only Wizards player to appear in all 82 games, starting 67 of them.

The main criticism is that Jordan was simply chucking the ball to get his point total up over 20 a game, which just isn’t true if you watched the games or just looked at the numbers.

He averaged 18.6 shots per game which was the second lowest of his career and a full four shots less per game than his career average of 22.9.

Though it wasn’t rare for us to see MJ score 40+ throughout his career, the three games of 40+ represent the only times in NBA history a player over 40 years old has ever scored that many points.

Another complaint about Jordan’s final year was that for him to comeback for a final season “hurt the team.” Seriously?

Check out who the Wizards were starting the majority of the time alongside Jordan- Jerry Stackhouse, Larry Hughes, Christian Laettner and Brendan Haywood. Laettner was 33 and looked 45. Haywood was merely a low post defender. Tyron Lue and Kwame Brown got quality minutes as well.

Stackhouse, Jordan and Hughes carried this team. I had no recollection of what the Wizards record was during that final season prior to writing this, but guessed it was somewhere in the 20 win zone.

Surprisingly they were 37-45, a mere five games from being in the playoffs.  So even in his final season, when he was supposedly being selfish, he made his team better just like he had during his career with the Bulls.

Michael Jordan’s final season was amazing, and just like the rest of his career, he did things that no other player ever did.