Why is Jon Beason posing with acclaimed actor Taye Diggs while showing off his helmet, powered by Duracell Quantum batteries? I have no idea.

I received images of the promotional event inside MetLife Stadium after I spoke to Jon, so your guess is as good as mine. But they are so #BADASS (just like Duracell) I had to use them.

But I did ask Jon some great questions. Check them out:

Is this the most difficult period of time in the history of the NFL to play defense?

Jon Beason: “Absolutely. They’ve completely made the game too passive. That’s what they want, they want more points. It is what it is.”

Is there an NFL player you look forward to tackling the most?

Jon Beason:”Everybody! I’d love to tackle everybody! It doesn’t matter to me – I don’t discriminate!”

How did you start working with Duracell?

Jon Beason: “Duracell reached out and being the “Mike” linebacker in our defense, and equipped with the headset, I’m powered by Duracell Quantum.

“Through the course of an NFL game, 650 Duracell Quantum batteries are used and that’s just mind boggling. Go to facebook.com/Duracell to find out all the others ways they are used on the field, and to make sure the fans have the best experience possible.”

Why do opposing QB’s call out where the mike linebacker is?

Jon Beason: “In a 4-3 scheme there are 11 guys on both sides of the ball. There are two of everything except the mike linebacker; cornerbacks, defensive tackles, outside linebackers and safeties and then the one mike. Based on where he aligns, he is the x-factor, the extra defender, the guy you have to account for because when the offense overloads a side in terms of protection, that is where we can gain an advantage.

“They usually point me out as mike based on what we’re in, but based on how were spinning the safety down, what we’re showing when we are showing pressure, they can call someone else the mike and say he’s the guy you are responsible for, if he comes, he is the x-factor in terms of pressure.” 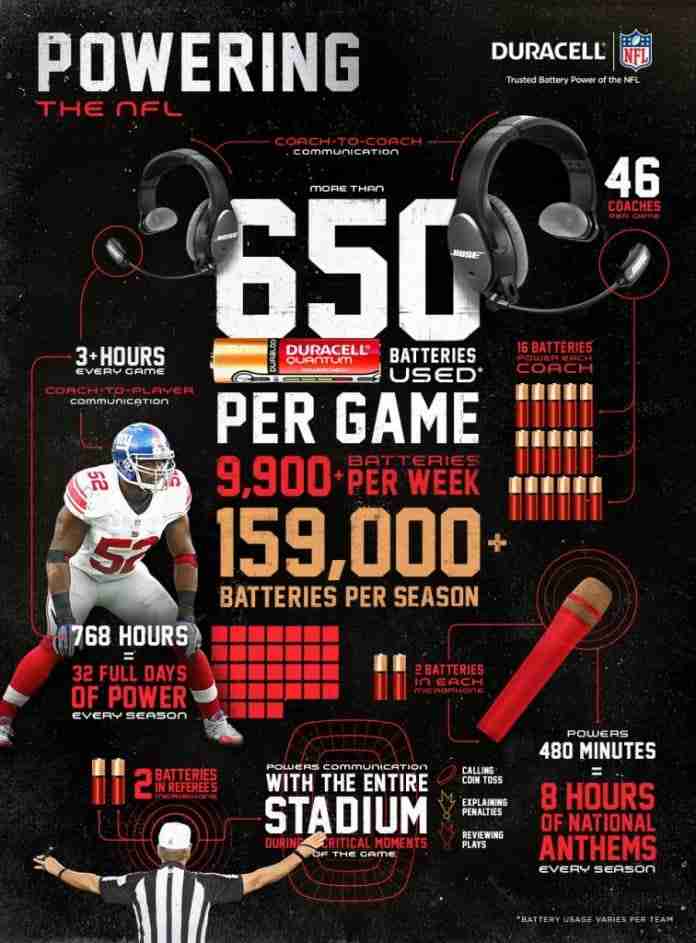 In your career,  you’ve played both “Sam” and “Will” linebacker positions. Are you glad to be the mike linebacker, exclusively?

Jon Beason: “It’s funny. The reason I played outside is because I got drafted as a will and got moved over in week five of my rookie year due to injuries and played the mike backer and ended up being the best possible fit for me and my personality.

“It’s home; it’s like riding a bike. It’s something you’re never going to forget and something I’ve done at a consistent level so to be back at that position is something that I’m grateful for and appreciative of.”

I read an interview you did with Newsday about Michael Barrow owning the Giants single-season tackling record. He also went to the University of Miami and played for Carolina, where you broke his single season franchise tackling record. What is it about you guys?

Jon Beason: “Personally, and I think if you look at the stats and the guys who have come out of Miami, we truly are ‘Linebacker U’, though Penn State could be a close second. When I was at Carolina, I was just kind of cruising along doing my job and everyone was like, ‘Hey you broke this record.’ And I was like, ‘Wow.’ So it became a competition and you want to just keep pushing the limitations and it just happened to be Michael Barrow. The fact that he owns that record up here is pretty funny.

“I want to do my job and stay within the realm of what I’m supposed to do on a particular play, not freelance. And being active in the 148-150 tackle range, that’s a great benchmark for excellence.”