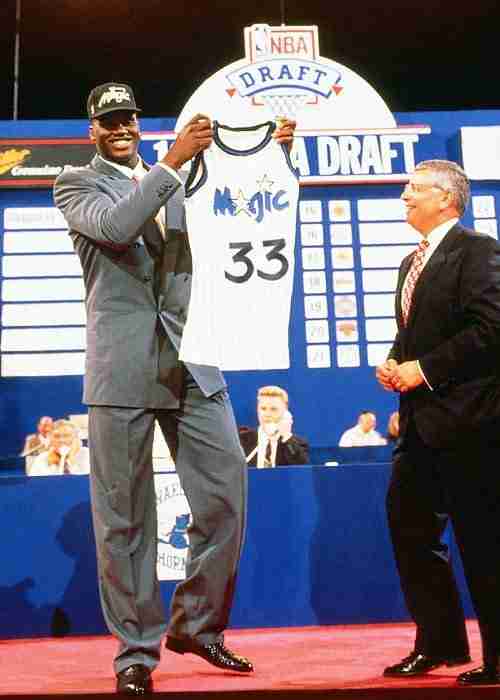 The Big Aristotle aka Shaquille O’Neal was the first overall selection in the 1992 NBA Draft and you probably weren’t even born yet.

If you were, you couldn’t get enough of that FIRE single, Ice Ice Baby. Has there ever been a better #1 overall NBA Draft pick in history?

How big were you at 20 versus now? You haven’t gotten taller, that’s for sure, friend.

All your growth has been horizontal. And I don’t mean that in a complementary Oliver Miller type of way.

Keep shoveling it in with that hoof, fatty. You dominate the paint and by paint I mean your local Golden Corral buffet. I get it, you’re “bulking up” and are going to enter the “tone down phase” soon.

Anyway, this isn’t about your penchant for bread.

This is about the 1992 NBA Draft and Shaq. Just look how he dwarfs David Stern in this footage:

During his junior (and final) season in college, Shaq led the NCAA in blocks and rebounding, becoming only the third seven footer in history to win the rebounding title, joining Artis Gilmore and Akeem Olajuwon.

Speaking of “Hakeem,” was he a better selection than Shaq in the 1984 NBA Draft?

The “Big Aristotle” couldn’t have been any better during his initial NBA campaign, averaging 23.4 points,13.9 rebounds, and 3.5 blocks per game for the season.

He was named the 1993 NBA Rookie of the Year and became the first rookie voted to start an All-Star game since Michael Jordan in 1985.

The Magic finished 41–41, winning 20 more games than the previous season, and Shaq became the most feared big man in the entire league.

On this same day three years later in 1995, The Toronto Raptors selected Chicago guard B. J. Armstrong with the first pick and the Vancouver Grizzlies chose guard Greg Anthony with the second selection in the Expansion Draft, as the NBA’s two newest clubs began preparation for the 1995-96 season.