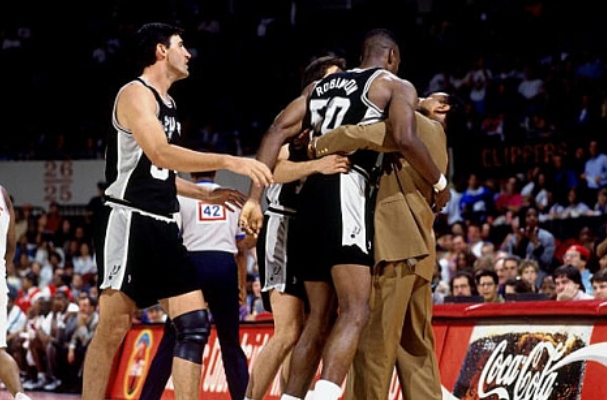 What makes Robinson’s 71 point performance special is that not only was he just the third player to score 70+ in an NBA game, but that the 1993-94 NBA scoring title was on the line.

Dateline: 4/23/94. Back when your mom was young and hot and you were home alone because she was at the bar on a weeknight again.

Heading into the season’s final game, Robinson had to outscore Shaquille O’Neal by a total of four points and the title would be his. Both the Spurs and Magic had locked down their playoff seeding’s so it was essentially a meaningless game for both teams involved, as far as the standings were concerned.

But both teams did want their big man to walk away with the scoring crown. I still remember at the time it was basically assumed that Shaq, as the favorite having taken the NBA by storm in his second year, would find a way to out-do Robinson. Either way, having two of the game’s best and most popular players going head to head in the final game of the season was about as good as it gets.

Robinson started out hot. In the words of The Admiral himself; “From the opening tip, I was hot. In fact, I scored the Spurs’ first 18, accounting for all but two of our 20 first quarter points. Once my teammates realized that I had such a hot hand, they kept looking for me, trying to get me the ball.”

In the second quarter, Robinson slowed down, scoring just six points, heading to the locker room with 24 at the half. “The Clippers, of course, were trying hard to stop me,” said Robinson.  “They were fighting, clawing, bumping, grinding, and double- and triple-teaming me to try and keep me from scoring. I had the scratches and bruises to show for it. In the second quarter, my production slowed considerably. I was not in sync and scored only six points.”

But DR came out like a monster in the second half. Since the game was meaningless, his teammates made a concerted effort to get Robinson the ball on every possession for the entire half. “I really got rolling in the third period and scored 19 points, giving me 43 for the game,” said Robinson. “Even the Clippers’ fans were rooting for me despite the fact that Los Angeles had a good shot at winning the ballgame, trailing by only four after three quarters.”

But give the Clippers credit for having some pride, even though their season was effectively over, by double and triple teaming him on every touch. Nothing came easy for Robinson in this game- as 25 trips to the free throw line (making 17) would attest.

“The fourth quarter was really remarkable”, said Robinson. “Despite tremendous pressure from the Clippers’ defense, who knew the ball was going into me most of the time, I scored 28 points.”

O’Neal needed 68 points against New Jersey that night to win the scoring title. He scored 32 points, finishing with a season average 29.346. Robinson finished at 29.787 points per game, giving him his first and only scoring title of his career.