I glamped with two guys named Joe – Joe Kinsley from BustedCoverage and Joe Miragliotta from Joe’s Daily and latest Tik Tok mega influencer – and definitely said “Hey Joe” many times over four days just to see both of their heads turn at once.

There was a third Joe as well…Joe Momma. She loved my inflatable twin size mattress inside the glampground.

The word glamping is a combination of the words glamour and camping. Glamping is essentially camping without any of the struggle.

Read a book? Idiotic. Why when the WiFi in the tent is blazin’ fast? The closest you get to building a fire is opening your Amazon Fire tablet.

For example, on my first morning at the M&M’s Glampground, my heterosexual bunk mate/life mate Joe Kinsley introduced me to Yacht Rock via Pandora.

This would have been impossible via traditional camping.

Yacht Rock is a mix of songs from the 70s and 80s that you didn’t realize you wanted to hear until you hear them – Hall & Oates, Fleetwood Mac, America – and then you wonder what the FUCK have you been listening to?

You feel so great and relaxed and de-stressed, that you take a nap after only being awake for two hours.

Here’s me and Kinsley taking in some Yacht Rock, 5 minutes before I laid down again:

Allow me to take you on a quick tour of our M&M’s glamping tent:

Glamping tents come in all sizes and shapes, just like M&Ms and NASCAR fans at Kentucky Speedway. Check out our (me and the Joes) glamping tents.

‘Ol tent number 28 got alotta action this weekend! And by “action” definitely mean two 40-year-old dudes farting and snoring – sometimes both at the same time. 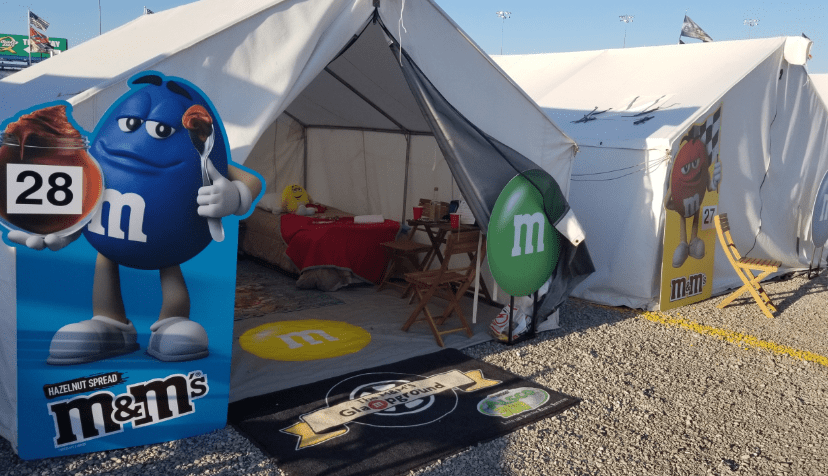 The partying/tailgating/chilling at Kentucky Speedway is best summed up by Yacht Rock band America and the song Ventura Highway (which actually mentions a dude named Joe):

Thanks to the Turn 2 Tavern, conveniently located in Turn 2, I drank some apple pie moonshine on multiple occasions and it was so good.

Just like with every NASCAR race I have ever been to, the people you meet at the track take the experience of fun to the next level.

Check out this dude with the neck brace: 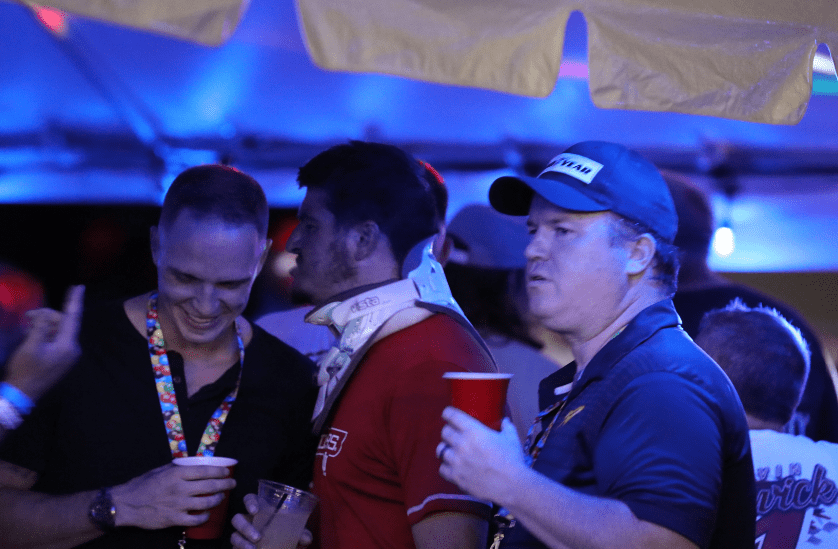 This dude was hammered and told me he recently broke his neck while racing and crashing into a wall. He had a face like a fist.

No joke an hour after Joe (two heads turn) caught this shot, he was surrounded by 10 sheriffs deputies.

He took a HUGE pull off his vape, emitted the biggest vape cloud I have ever seen, and dipped out between two motor homes, just like an octopus shooting ink and escaping a dangerous jam.

The next day he was back at Turn 2, getting turnt, without the neck brace, wearing a wife beater. and nobody cared or gave him a hard time. It was a new day.

Plenty of characters at Turn 2. It was a big surprise to run into Samurai Mike Singletary: 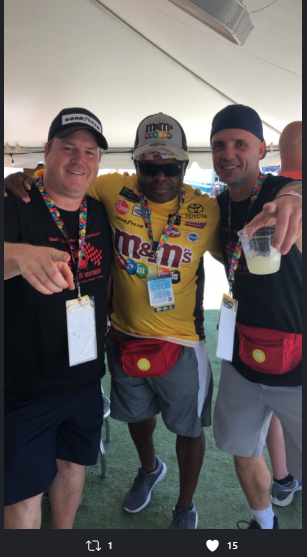 Check out these NASCAR lot lizards:

The ladies at Turn 2 tolerated us all weekend. 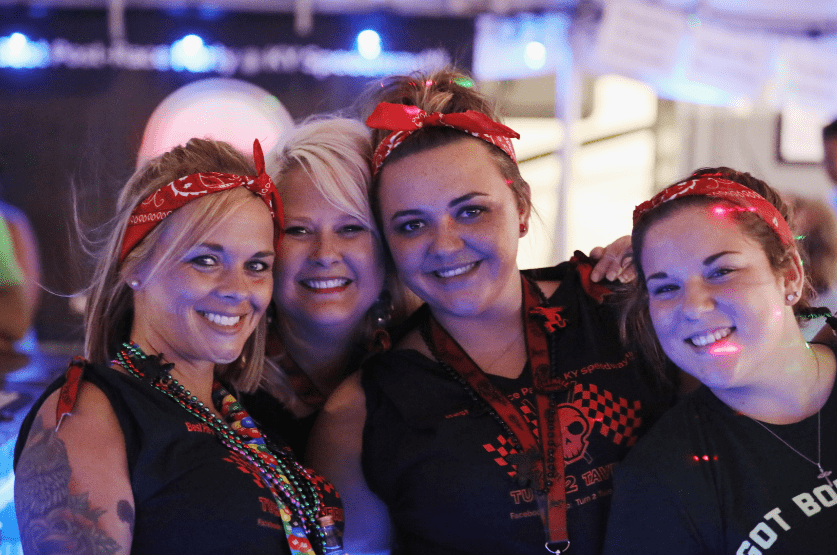 But, we made up for our lack of personality with hundos.

The Turn 2 Tavern was located on the infield of the track, while Fireball Alley was located next to the grandstands on turn one.

For $30, college kids get a camping/glamping spot outside the track and a ticket to the race. 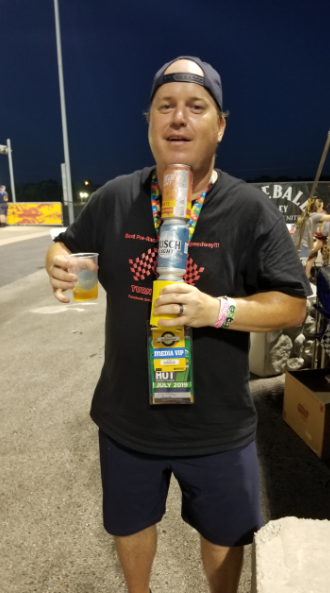 Here’s the progression of Joe ordering some beers from Fireball Alley with his new friend Bradley, note the gaped mouth in the final image.

There was so much glamping going on at the M&Ms Glampground, I almost forgot about the parade of NASCAR personalities that shared time with us at Kentucky Speedway. Like NASCAR/NFL champion Joe Gibbs who I spoke to about the forgotten Redskins dynasty.

My personal highlight was when I asked NASCAR champion Kyle Busch, in front of the entire glampground and the emcee Ryan Eichler, the greatest question of my journalistic career:

What is your favorite vegetable?

Busch told me he was stumped. It was the one time during his sub-10 minute appearance that he was quiet; he was really thinking about his favorite vegetable.

Kyle Busch: Is a tomato a vegetable?

Paul Eide: No, it is a fruit. I think because of the seeds.

Kyle Busch: I’m stumped, this is a great question.

Paul Eide: Thank you Kyle. This is the culmination of 20 years of interview experience.

Kyle Busch: Cucumber – is a cucumber a vegetable?

Paul Eide: Yes it is.

Kyle Busch: But it has seeds. So if a tomato has seeds and that makes it a fruit, how is a cucumber a fruit?

Paul Eide: I don’t know Kyle. I was pretty sure you were going to say avocado.

I’ve never been encumbered by celebrity to ask the hard-hitting journalistic questions.

And the glampground was no exception.

It was funny because later that night a fellow glamper asked me, “Why did you waste time and ask him that stupid vegetable question?” To which I replied, “Make like a tree and leaf.”

BTW Joe (two heads turn) Miragliotta took almost every picture in this article, which is why there are none of him in it.

So, here’s one of him dozing off to Yacht Rock:

Glamping at Kentucky Speedway was the perfect mix of NASCAR, Yacht Rock, moonshine, and cool people.

In the modified words of Hall and Oats, I can go for that.

Rick Allen On How He Became NBC’s Voice And Face Of...

Best Images From The Indy 500