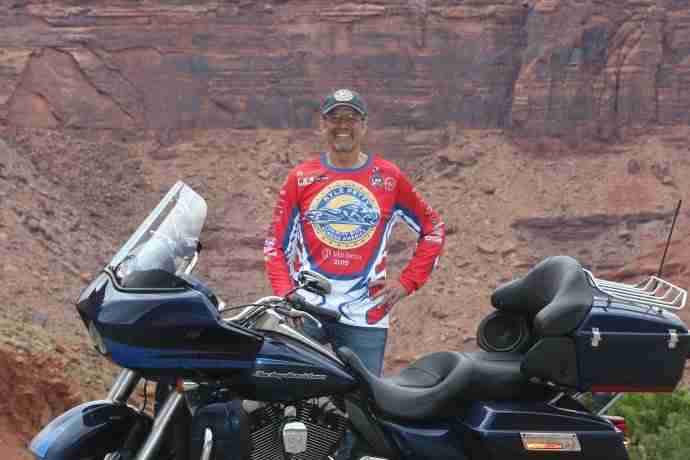 The son of iconic driver Richard Petty raced at the highest level for over 30 years, owned a racing team for over 10 years, and has been a TV commentator since 2008.

Petty’s place in NASCAR history is unique: He is the living bridge between NASCAR’s early icons and the stars of today.

In the ’70s he raced against legends like David Pearson and Bobby Allison; in the ’80s and ’90s, he squared off against Richard Petty and Dale Earnhardt; and in the 2000s, Jeff Gordon and Jimmie Johnson. Petty has experienced the evolution of the sport in a way that no one else can lay claim to.

On April 30th, he will lead the 22nd annual Kyle Petty Charity Ride Across America. The Ride will take 200 bikers on a 2,150-mile route to raise funds and awareness for Victory Junction– a camp Petty started in 2000 for children with chronic or life-threatening illnesses.

I asked Kyle for his insight into the icons of the sport, his first professional race as an 18-year old driver at the 1979 Talladega 500, and his trademark ponytail.

During the end of the 2015 season, Jeff Gordon got a lot of credit for mainstream crossover appeal during his career. But I always thought that your dad was the guy who did that first.

Kyle Petty:  I always explain that like this: I think in the history of the sport, since the sport started, in the ’50s the sport was finding its way for 10-12 years, to figure out what it was going to be where it was going to go. Then in the late ’50s to early ’60s, you had the Richard Petty’s and the David Pearson’s and the Bobby Allison’s and guys like that who came into the sport.

The funny thing was is that I think my father was that guy who took the sport from the early ’60s into the latter part of the ’70s. And like you said, he was the guy. If you knew anything about NASCAR you knew who Richard Petty was. He had gone to the White House, he had done things that no other race car driver had ever done. He won championships, he won races. He’s that mountain peak from basically the ’60s to the ’70s. And then along comes Earnhardt in the late ’70s. And Earnhardt was able to take the sport, TV came into it, and he was the guy that took the sport from the late ’70s through the ’80s into the early ’90s, to the point where Jeff came along to the mid-90s.

The Talladega 500 in 1979 was your first NASCAR race. Do you remember what it was like to sit in that driver’s seat before the race started?

I qualified like 19th or 20th and I think I finished ninth or 10th that day, something like that. But I will never forget, I ran that race, and they come by me so fast it would make your head spin. And I thought, ‘These guys are tough, man!’ I never realized how tough these guys are.’

The race is over with and I’m just sprawled out on the bench in the garage area because I’m just spent. And David Pearson comes by smoking a cigarette. He looked at me and said, ‘You’re gonna have to get a helluva lot tougher if you’re gonna hang with us.’

I bet he wasn’t joking either was he?

KP: No, he was not joking! And I’m thinking, ‘Holy crap! Here’s these 40-year-old guys just kicked this 18-year-old’s butt six ways from Sunday!’ And I thought I was in shape! I had just come out of high school playing basketball, football, and I knew these guys weren’t in shape.

Your personal style on TV is so smooth – I actually love the pony tail. I’m sure the guys give you a hard time about it every once in a while.

KP: They all do! And here’s the funny part – this is true. I always had longer hair and I went to drive for Felix Sabates. Felix had bought our team back in the late ’80s or early ’90s. And he hated my hair, man. He kept saying, ‘Get it cut, get it cut, get it cut.’ And finally I went and got it cut. And the very next race, we went to Talladega, Alabama. I was in a wreck and broke my leg. I had to sit out for three or four months. I told him after that, ‘I am not cutting my hair again, it’s bad luck!’ Basically since that time, I’ve cut the ponytail a little bit here and there so it’s not all the way down my back. But I told him, ‘I guess I’m gonna be that 100-year-old guy with a pony tail – I don’t want to change my luck.’ It went bad one time and I’m not changing it again!

For more information about the ride visit www.kylepettycharityride.com.