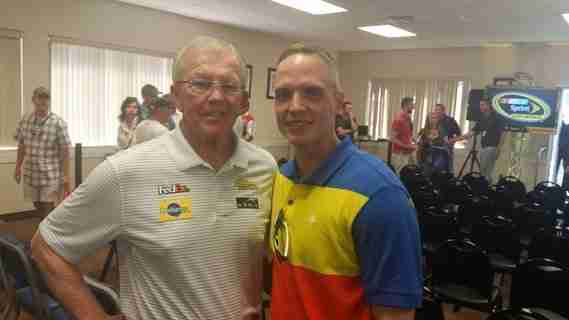 How many Super Bowls have the Washington Redskins won? Three in nine seasons – and no one remembers. Except me and Joe Gibbs.

For an unknown reason, NFL history has robbed the Redskins dynasty of the 1980s and early 90s of the recognition it deserves. But the real question is, why?

NFL fans remember the Packers championship teams of the 60s, the Steelers of the 70s, the 49ers of the 80s, the Cowboys of the 90s, and the Patriots of the present day. But no one remembers the Joe Gibbs-led Redskins.

Not content with one of the most successful coaching careers in NFL history, Gibbs created his Joe Gibbs Racing NASCAR team in 1992. The team has won four Sprint Cup championships since 2000 with stud drivers like Bobby Labonte, Tony Stewart, and Kyle Busch.

I spoke to Coach Gibbs about flourishing in both sports, the upcoming Daytona 500, his relationship with Jack Kent Cooke, and why he thinks his success with the Redskins has been largely ignored. You can listen to the interview via the audio player or read the full transcript below.

You’re an absolute titan in two of the biggest sports in North America, in the NFL and NASCAR. It’s almost like you’ve lived two different lives, really. What’s it been like for you?

I realize I’m one of the most fortunate people in the world. Because rarely does anybody get to have a dream as an occupation, and I’ve had two of them. It’s a thrill for me. I know how fortunate I am and I appreciate being a part of two great sports.

And what I’ve found, is they are very similar, football and racing. Amazingly, they’re almost exactly the same because it’s what? It’s people. It’s picking people, putting them on a team and getting them to sacrifice their individual goals for the goals of the team. It’s teamwork. And that’s a big part of life. I’m thrilled to be a part of the M&M’S team and it’s a thrill for us to race in a place like the Daytona 500 this Sunday.

Can you talk about (former Redskins and Lakers owner) Jack Kent Cooke and what it was like to work with him?

Mr. Cooke I think was a great owner, and for this reason: Many times he had a strong opinion. He’d stick that finger out and say, “You need to do this.” But what he always said before I left the meeting was, “But it’s gotta be your decision; you decide.” Many times, if I did something and it turned out to be he was correct, he’d definitely let me hear about it. But Mr. Cooke always said to me,  “It’s gotta be your decision; you make the decision.”

The other thing about Mr. Cooke, he was always at his best when things were at their worst. He would come in, he would visit me, I figured he was going to be upset when we’d be going through a bad streak of losses and he would say to me, “Hey Joe, we’re going up and we’re going down together.” He had a favorite saying: “I’m going to lay down and bleed a while, and then we’re gonna get up and fight again.” He was special, I think, for me, just like Dan Snyder was the second go-around for me. I had two great owners.

It just occurs to me that the Skins dynasty doesn’t get the props it really deserves. Why do you think that is the case historically?

“Well, I’m glad that you mention that because I feel strongly about that. And I think you’re right. We went to four Super Bowls in 11 years. And we had great players; I think that more of our players should be in the Hall of Fame. You’re right, for some reason that era gets left out. Obviously, the 49ers were in there, the Giants… there were some other real good teams. But I feel just like you, you voiced the opinion, which I agree with. What it takes to be able to get to a Super Bowl, and to do it four times, that says a lot about our ownership, our front office and our players. So, I agree with you and I appreciate you bringing it up.

Well, I’ve thought about this probably more than I should’ve, but it’s almost like the legacy is punished because of your versatility. You’ve got three different quarterbacks that you won a Super Bowl with, three different starting running backs. Defense has a couple of stalwarts, but there’s a lot of personal changes there as you’d expect over an 11-year period. Do you think the success you had with so many personnel changes has been detrimental in hindsight, if that is even a possibility?

Well, you bring up an interesting point. I’ve never looked at it that way. But I think we had a lot of those players that went to two, three, four Super Bowls. And I think that for that period of time, we did have three different quarterbacks. But I think that says a lot about the surrounding players we had with them and those three guys. People always say, “Hey, you won three Super Bowls with three quarterbacks.” What they leave out is three greatquarterbacks. You got Joe Theismann, you’ve got Doug Williams, and you’ve got Mark Rypien. I mean, those guys were special; we had special players. But I appreciate you bringing it up this morning, you made me feel good! Okay? Because I think we need more attention on what we were able to accomplish, that team, in that 11-year period.

It’s a travesty to me, and I’m not even a Skins fan! I’m an NFL history guy!

I appreciate that, believe me! You’ve shown that you’re very knowledgeable about the Redskins, I’ll say that.

You’re credited with inventing the single back offensive set. Can you talk about the first day you implemented it at practice? How did it come to be?

I think that’s real interesting and you bring up a great point. We were with the Chargers and we drafted Kellen Winslow — great tight end — and we found that when we put him on the line of scrimmage where you normally put a tight end, they would hammer him with two linebackers and it made it hard for him to get off the line of scrimmage. So we started thinking about it and we said, “Hey, look, let’s take him off the line of scrimmage, okay, and let him move back and forth. And as a consequence, let’s take out a fullback, let’s put one running back back there, and let him play h-back. So we could actually have a tight end, get Kellen Winslow moving around, and there, we actually wound up with a one back set. And that’s kind of how it all evolved.

It started with Kellen and then when we came to the Redskins, we had a problem trying to block the outside linebacker from the Giants, if you remember that guy (laughing). We said, “Hey, we can’t block him with a tackle, what can we do?” Let’s put a tight end in front of him. So again, our h-back served a real purpose. If you go over and put an h-back in front of Lawrence Taylor, you make him at least now rush around that tight end and we’ve got a chance now to at least block him. And so, there were different reasons to go for it. Basically, it started with Kellen, then we kind of developed the one back set and it was very productive for us and allowed us to have a lot of formations, too. So it was an evolution, but I can tell you’re a real football guy.

The last question I have is about you personally. How much of your success has been attributed directly to your will? And also, as you’ve increased your skill in life, have you noticed that life sort of accommodates by demanding more of you?

I think for me, it’s been all about team. It’s been about people. I like people. And it’s being able to recruit them, put them together in a group and ask them to sacrifice themselves and their individual goals for the goals of the team. So, it’s been about people. And so I look back at my life… it’s interesting you ask me that… I think a lot about all the people and the relationships I’ve had. And that to me is the real thrill. And most of it, when you’re in sports, a lot of it has to do with the tough times. You go through tough times and losses, practices, all the hard work on the field, and that’s what kind of binds everybody together. And then you’re hoping that you can kind of capture that feeling and wind up winning a Super Bowl. And that’s hard to do. So, I’ve been thrilled to be around the right people, that’s the best way for me to put it. And with the right ownership and front office, and those assistant coaches, our coaching staff had a lot to do with our success.

2 thoughts on “Joe Gibbs On The Forgotten Redskins’ Dynasty, How It Still Bothers Him”